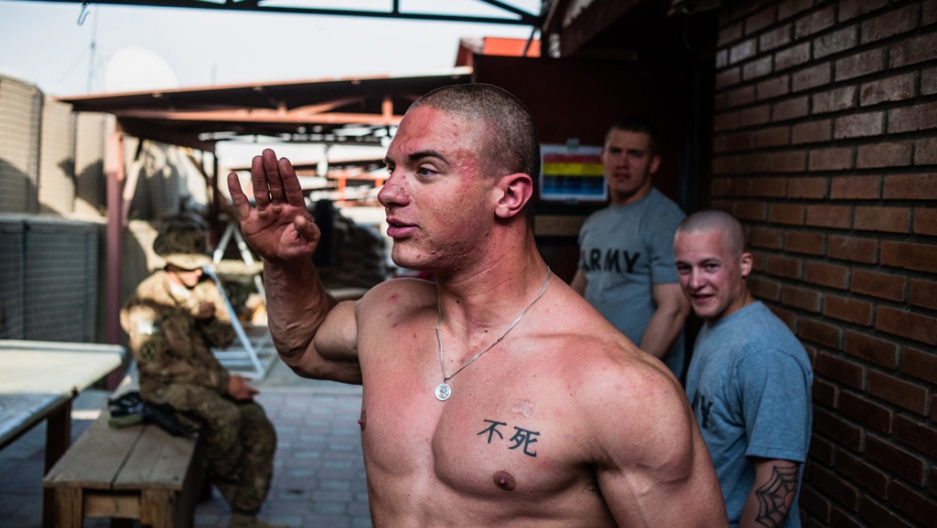 Soldiers from 2/4 Infantry joke around during downtime at Tagab. Their mission in Afghanistan is very hands-off, as America begins to draw down its forces.
Credit: Ben Brody
Share

KAPISA PROVINCE, Afghanistan — The glowing hot embers of America's war in Afghanistan, embodied by the military's far-flung combat outposts, are winking out one by one. The few remaining outposts will be turned over to the Afghan military soon, as the US drawdown advances to its uncertain conclusion next year.

For those who have lived much of the last decade at these dangerous little bases in Afghanistan and Iraq, it is somewhat bittersweet. Ask an infantryman here what he will miss most, and he will probably tell you he'll miss patrolling — walking through the mountains, getting in fights, learning who is firing at him — and learning who his friends are. But that is becoming a thing of the past for US soldiers in Afghanistan.

Even a well-fortified American base in a critical area, like Forward Operating Base Tagab, is an endangered species. The US soldiers here say they'll be leaving it for the Afghans within the next few months. FOB Tagab was built by the French military, and has only recently fallen into American hands. Brick barracks and cement pathways would make it seem like an Army base in the US, were it not for the jagged mountain peaks rising around it and the sporadic gunfire from the nearby village.

The local Taliban's gunfire is usually directed at a nearby Afghan National Army checkpoint. The ANA respond with heavy weapons, even with an old Soviet tank that they maintain, but the US troops at Tagab do not intervene if they themselves aren't under fire. During a taped interview with Capt. Tyson Walsh, assistant operations officer for 2/4 Infantry, a thunderous firefight broke out in the village. It clearly did not involve US personnel, so he kept answering my questions as blasts shook the ground.

"I know my place now, and my place is as an advisor," Walsh said. "That's why I'm not getting up and running to the (operations center) to find out what's going on and what I need to do."

Walsh's attitude toward his mission is typical of the soldiers here, who wish they could go out on patrol and fight, but understand that their mission has changed. They are not only acting as mentors for the Afghan military commanders, they also serve as something of a backstop for the ANA. Afghan troops are planning missions and fighting on their own, but Americans are always nearby with attack helicopters, artillery and extensive surveillance equipment.

Taliban fighters certainly know those American combat capabilities are idling nearby, so it is unlikely they would make a determined attempt to overrun a local ANA checkpoint or FOB Tagab itself.

Even without the experience of combat to bind them together, the younger soldiers at Tagab behave just like young soldiers do on any other US deployment in Iraq or Afghanistan.

"The action wasn't what brought us together — it was the downtime, the tediousness, the boredom," said Staff Sgt. Bruce Brown, an artillery forward observer with 2/4 Infantry and a veteran of combat tours in Iraq and Afghanistan. "There's even more of that here, so guys rely on each other more to make sure they go to the gym, make sure they stay sane through the tediousness."

It takes discipline and patience to photograph the quiet moments in Afghanistan. These can seem like unworthy subjects amid the inherent drama of war. On my flight in to Tagab, for example, soldiers were firing white phosphorus mortar rounds at a nearby mountain, setting its slopes ablaze with an eerie yellow light that flowed downhill like lava.

But a photojournalist should be wary of glamorizing violence or glorifying war. It's sometimes difficult, because war often feels glorious and soldiers often act invincible. The feeling of watching huge bombs explode in the distance or even seeing someone shot right in front of you — it's an experience like no other. For me there is a tremendous rush of anger, pity and awe.

The banal experiences stick in my mind just as vividly though, like the smell of wet dust at the onset of rain and the constant roar of the generators with their diesel exhaust stench. I'll remember eating bland junk food in the glaringly white chow halls with powerful fans that blow your crumpled napkins to the floor when you get up to leave. I'll remember that lemon iced tea sold at the big bases, so welcome after two weeks at a wretched outpost.

These photographs may represent my last look at the rapidly disappearing American outpost in Afghanistan. Next year, when I'm covering the drawdown's conclusion, all of these little Americas will be entirely in Afghan hands or bulldozed away to nothing.