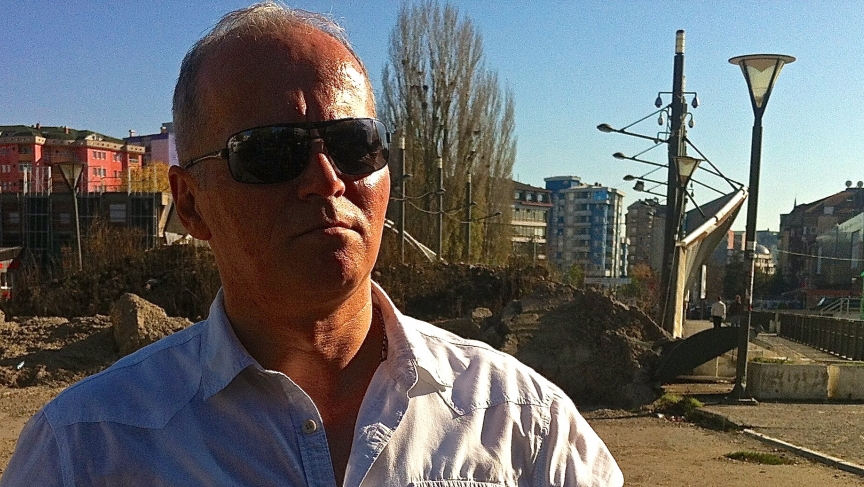 Nebojsa Jovic is urging Serbs to boycott the Kosovo municipal elections. He says the Serbian government in Belgrade is betraying Serbs in Kosovo by telling them to vote.

There are two Kosovos. The one south of the Ibar River and the one north of it.

To the south, where 1.8 million people live, Kosovo is a truly independent country, home to a largely Albanian population. To the north of the Ibar, home to the largest concentration of Serbs in Kosovo, the country is more of a de facto Serbian province.

Even though Serbian forces officially withdrew from Kosovo in 1999, when the war ended, this northern tip has, in practice, remained an extension of Serbia, which nurtured the region with millions of dollars and government institutions. It stands in contrast to the Serb communities in other parts of Kosovo, which have, to varying degrees, adjusted to life in independent Kosovo.

The Ibar River runs through the city of Mitrovica. Like these two Kosovos, the city is divided. The south is mostly Albanian, while the north is mostly Serb. Prone to violence and unrest, it has come to symbolize ethnic division in Kosovo.

While the long-running troubles between Serbs and Albanians haven’t disappeared, they’ve been eclipsed by a conflict among Serbs themselves. And the last few months have been especially bad in north Mitrovica, with bombs going off with some frequency.

“You can feel the tension everywhere,” says Duska, watching her two grandchildren play at a fountain in a square in North Mitrovica.

These days, she’s not letting her grandchildren out of her sight. “They’re small and the situation is the way it is,” Duska says.

No one has been killed in the blasts, but they’ve rattled nerves ahead of Sunday’s local elections. At issue isn’t so much who’s running - it’s a more basic question about whether or not to participate at all. Those taking a stand on either side have been targeted.

In the past, Serbs in the north have largely boycotted Kosovo elections. The government in Serbia actively encouraged that and has held parallel elections of its own. But now Serbia is actively encouraging Kosovo Serbs to vote in elections organized by Kosovo — and is even promoting a slate of candidates.

While Serbia is still holding the line and not recognizing Kosovo as a country, it has been improving and normalizing relations as part of its effort to join the European Union. A major breakthrough happened in April, when Serbia agreed to relinquish its de-facto control of the north. These elections are a big step in that direction, because the representatives elected will come into office under the umbrella of Kosovo the country, including its laws and constitutions.

All this leaves people like Duska with a dilemma — whether to vote.

“Well, it’s up to me, it’s my decision, no one can make it for me. No one can order me to do it,” Duska says. “Of course, someone can point at me and say I’m a traitor if I go out and vote. That is why I have to decide.”

Duska won’t say what she plans to do on Sunday, and that’s probably a wise move on her part. She’s an engineer who works for the Trepca mining complex. Once the most important economic engine in Kosovo during Yugoslav times, it is now split between the Kosovo and Serbian governments, who claim ownership over it. The Serbian government pays Duska’s salary, but she rarely shows up for work.

Thousands of people here are on the Serbian government’s payroll, and in many cases, they’re paid for jobs that only exist on paper. Serbia has done this as a social assistance of sorts to encourage Serbs to stay in economically strapped Kosovo.

Now the Serbian government in Belgrade is counting on them to vote. Leaders, including Prime Minister Ivica Dacic, once the spokesman for the late Serbian leader Slobodan Milosevic, have said doing so is in the best interest of Kosovo Serbs, as well as Serbia’s future in the European Union.

But if Duska heeds Belgrade’s call, she’ll have to contend with people like Nebojsa Jovic.

“I’ll probably go to church with my family in the morning, to pray to God and Saint Demetrios, the saint who’s helped us stay here in Kosovo for the past 14 years,” Jovic says of his election day plans.  “After that, my brothers, friends and I will go out on the street to see if anyone’s going to do something against their own people.”

Jovic is one of the leaders of the campaign to boycott the vote. For him, a vote is basically an endorsement of Kosovo as an independent state, which he’ll never accept.

“The biggest punishment for anyone who votes will be God’s punishment and our scorn. We just want to look those people in the eyes and ask ‘How can you do this?’ Jovic says, insisting there won’t be any violence.

Few are expected to vote on Sunday. Most Serbs here want nothing to do with an independent Kosovo. It’s reflected in a recent UN survey that found only 16 percent of Serbs in the north plan to vote.

Jovic is himself an elected representative on a local assembly established by Serbia — one that is sure to be rendered irrelevant after the elections. He says these elections show that Belgrade is giving up on Kosovo Serbs in a big way, like it did in 1999, when Serbia withdrew its forces at the end of the war

“When you are forcing your own people to recognize some other country knowing that we can’t survive, that’s the same betrayal we went through in 1999 when [Slobodan] Milosevic left Serbs here on their own,” Jovic says.

Beyond the sense of betrayal, Jovic fears the jobs provided by Serbia will also go away.

Jovic works for the Serbian state telecom. He’s clinging to hope that Serbia will reverse its current course of unwinding from Kosovo. But, at the same time, he’s realistic that the likelihood seems quite low.

“It’s a bit hard when you have Belgrade, Pristina, Brussels, Washington all against you,” Jovic says. “But we don’t have an alternative; we must stay firm.”

He’s also preparing himself for the possibility that Serbia could one day recognize Kosovo as an independent country, even though leaders in Belgrade insist that’s out of the question. If that happens, Jovic says, he and thousands of other Serbs will leave.

"But until that, we will fight until the end by any democratic means,” he says.