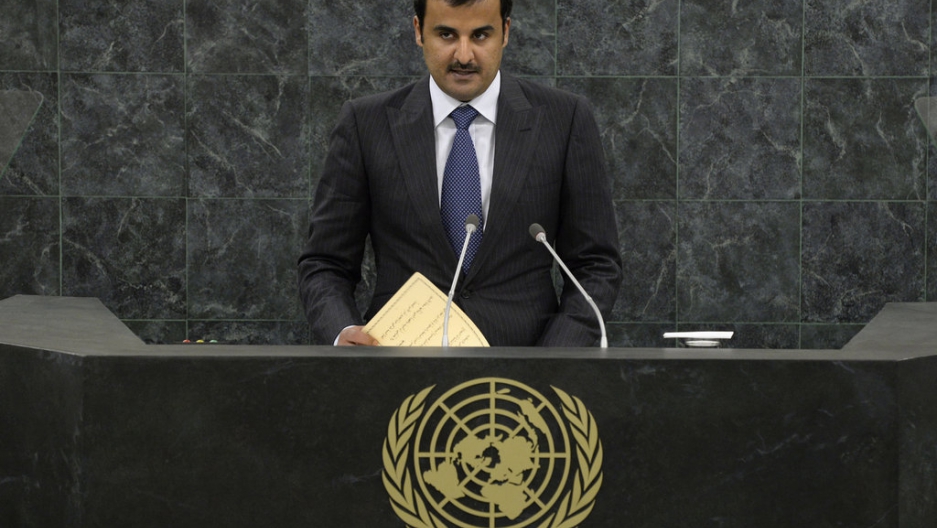 DOHA, Qatar — We stood outside the guard house in the desert wind on the outskirts of the city. Doha Central Prison rose on the horizon of a barren, rock-strewn landscape, electric wires cutting across a cloudless sky. We had been told we had permission to visit Qatari poet Mohammed al-Ajami, whose 15-year sentence for two poems had been confirmed the previous day by the high court.

For five hours we stood, paced and sat in broken chairs, negotiating on mobile phones with the attorney general’s office. The prison authorities had not received the request for our visit. The guards changed twice while we waited, guards from nationalities other than Qatari as are most of the workers in Qatar. They were friendly, sharing fresh oranges with us as the hours passed, but had no authority to help.

Inside the prison members of al-Ajami’s family were visiting him and knew we were out there. Al-Ajami knew we were there and wanted to see us. No one had gotten this far, the family later told us. But in the end we were denied.

For the last two years Mohammed al-Ajami has been in solitary confinement with limited access to visitors. A known poet in the Gulf and the father of four, al-Ajami was a literature student at Cairo University in 2010 when he recited a poem in his apartment among friends, a poem that allegedly criticized former emir Sheikh Hamad Al Thani. The poem was in response to a poem by a fellow poet, but one of the students in the apartment recorded al-Ajami and uploaded the reading on YouTube.

According to al-Ajami’s lawyer Dr. Najeeb al-Nauimi, a former justice minister in Qatar, the poem was spoken in a private setting and violated no law. Another of al-Ajami’s poems — “Jasmine” — was circulated on the internet and expressed support for the uprising in Tunisia and criticized all the Arab regimes.

Sixteen months later, al-Ajami was summoned in Doha and arrested, eventually charged with “encouraging an attempt to overthrow the existing regime,” “claiming that the emir misused and not abided by the Qatar Constitution” and “criticizing the crown prince,” who has subsequently become the emir.

Al-Ajami was sentenced to life imprisonment after a trial held in secret where the investigating judge, a non-Qatari, was also the chief judge. [The emir appoints all judges on recommendation from the Supreme Judicial Council, 75 percent of whom are foreign nationals, dependent on residency permits.]

Later on appeal, al-Ajami’s sentence was reduced to 15 years.

As representatives of PEN International and PEN American Center we — two American women — had come to Doha to argue for al-Ajami's release, but by the time our planes landed, the court had already upheld the 15-year sentence. All judicial appeals were now exhausted.

A country of two million people, but with only 250,000 citizens, Qatar is among the richest nations in the world per capita. Extensive gas reserves developed in the 1990s have given Qatar its huge income and given the country a seat at the leadership tables of the region and the globe.

During his reign the former emir set a course of modernization and brought reform to the government, brought institutions of higher education to the kingdom and developed programs in the arts and set up a Center on Media Freedom. The West looks to Qatar as a leader in the region. The imprisonment of a poet on an offense of lese majeste has confounded many though in an interview, the prime solicitor general insisted the charges were not about freedom of speech but were brought because the poet publicly offended people and urged the overthrow of the government.

In Qatar itself the case has received little coverage. The news media is owned by the government and the emir. Those familiar with the ways of the kingdom say the only recourse now for al-Ajami is a pardon by the emir. However, if an apology is necessary for that pardon, a standoff may occur. According to al-Ajami’s lawyer, the poet has questioned why he should apologize for having spent the last two years in solitary confinement for sharing a poem in a private setting. His lawyer notes that Al-Ajami has had his career disrupted; he has missed seeing his family for two years, including missing the birth of his youngest child.

As I flew out of Qatar, I stared at the desert below now filled with skyscrapers and modern museums rising from the land. I considered the math. Over 90 percent of the jobs are occupied by men and women of other countries who have no rights of citizenship and can be deported. Only one in 10 people are citizens; half of these are women, who have limited rights; over a quarter are children and the elderly. The country is run by a very small minority. I questioned whether the math was on the side of history.

If the country puts its poets in prison, one must wonder. On the other hand, if the new emir, Sheikh Tamim bin Hamad Al Thani, just 33 years old and educated in Britain, pardons poet al-Ajami unconditionally as PEN urges, then perhaps the curve of history will extend outwards, at least for a while.