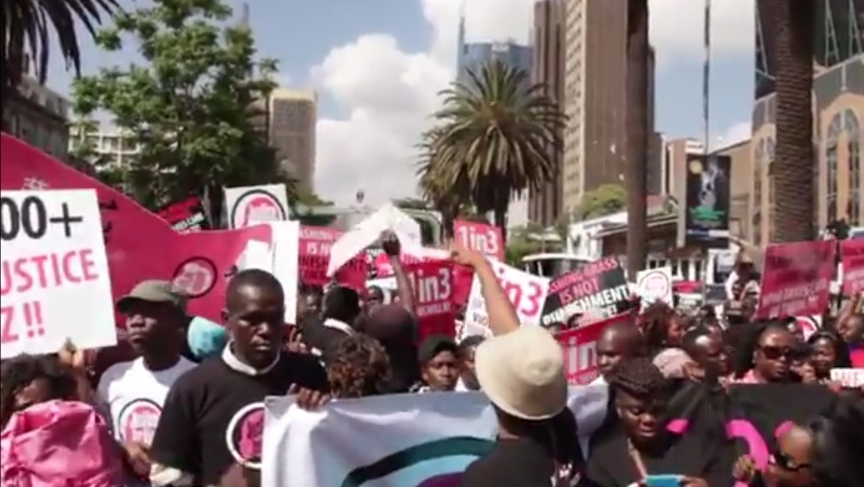 Kenyan activists rallied for justice in the gang-rape case of a 16-year-old girl on Thursday.

Five months ago in the Kenyan village of Busia, a 16-year-old girl was gang-raped and beaten to the point of immobility. She pointed the finger at six men, who attacked her on the way home from her grandfather's funeral.

When the girl, now known as Liz, came forward, officers sent her home to clean up, and assigned the suspects a chore: to cut the grass in front of the police station. The men were not arrested and still do not face trial.

It's the most recent in a series of gruesome stories about sexual violence in many parts of the globe. Earlier this year, the case of a woman in Dubai gained international attention. And on Friday, Johannes Kana was sentenced to two consecutive life terms for the violent rape and murder of 17-year-old Anene Booysen in South Africa.

In Kenya this week, protesters marched in front of police headquarters demanding justice for Liz. But unlike the massive outpouring of anger seen in some places, only a few hundred people showed up.

This attitude is something Saida Ali is trying to fight against as the executive director of COVAW, the Coalition on Violence Against Women. "We are basically a society that is not angry enough yet," she said.

"We see examples in India and South Africa of how people have mobilized, organized and there's been a public outcry. Each time, we ask ourselves, how come we don't get there as a Kenyan society?"

COVAW is one of numerous organizations behind the demonstrations. The protesters have a list of demands for police.

"The apology is just one thing," Ali said. "We are saying we need an acknowledgement."

They're petitioning for the arrest of all six men. They want a public announcement explaining where the police are in the investigation of the case. They want the officers held accountable, as well.

"We are demanding that the police make a public apology, not just to Liz, but to all the women of Kenya because of how they conducted themselves," Ali said. "And to make a commitment as to how they're going to address such cases moving forward."

There is no precedent for the light punishment the rapists received. Ali said it shows a level of disregard for sexual violence in Kenya. She said she was disgusted that the police sent Liz home without proper forensic investigation, and didn't direct her or her family in the right direction to file their report.

"That is problematic. It's lacking, but it also introduces the problem of the attitudes of the police," Ali said. "Treating sexual and gender based crimes as lesser crimes would mean that a police officier could just say to a victim or a survivor to go back home and clean up. It also shows the value that people have of women, and that people place on women's bodies," she said.

"People read about it in the newspaper and they move on and do their thing, because it does not, or has not, affected them directly. We want people to know that it is not just a problem for a stranger, that if it can happen to me, it can happen to any women or girl in Kenya."

Her call is being heard, though, at least online. More than a million people have signed an online petition regarding the case and since the demonstrations began, people from all over the world have shown their support for the Kenya-based justice movement by using social media hashtags like #Justice4Liz and #WeareallLiz.

Ali said technology may be a long-awaited tool in countries where opinions are stifled by societal pressures. An online platform, she said, can create a "collective action, collective voice."