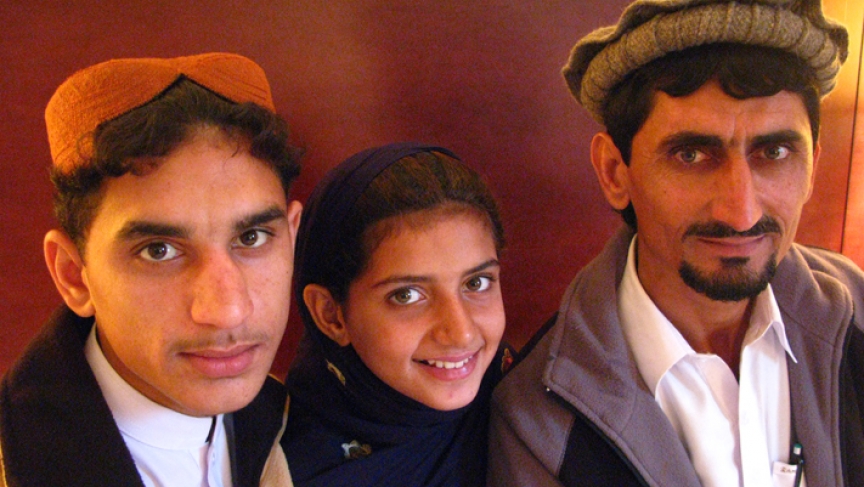 Zubair Rahman (13), his sister Nabila (9) and their father Rafiq sit in their hotel room in New York.

You can’t tell a drone your name.

Zubair, Nabila and Rafik Rahman came from the village of Tappi in North Waziristan to talk to people — to Americans — about a devastating experience for their family: a drone attack on their village.

They sat together on a hotel bed in New York, along with their interpreter, Michelle Khilji. When I met them, they’d just returned from breakfast.

“I had a gulab jamun and Pakistani tea, thank God,” said Rafik. “That’s what we like about New York — you can find everything. There’s some weird things, too.”

Such as New Yorkers celebrating Halloween.

“I saw people with different colored hair and different outfits on, so I’m kind of glad I stayed in my room during the night,” he said, with a laugh.

The Rahman family isn’t here to see the sights, though. They’re here to tell Americans what happened to them almost exactly a year ago.

On Oct. 24, 2012, Rafik’s children, Zubair and Nabila, were in the garden with their grandmother, Rafik’s mother.

“She was teaching me how to clean okra and how to know which ones are ripe or not,” Nabila said. “Then, in the sky, there was a drone and I heard a noise — dum dum — and I saw two fire balls come down right where my grandmother was standing.

“I couldn’t really see anything, but I smelt something weird. My hand was hurting and I saw that a lot of blood was coming out — I was trying to wipe the blood away, but the blood just kept coming out,” Nabila added.

Zubair’s leg was badly injured too. Their grandmother was killed. Her name was Momina Bibi; she was 67 years old.

Zubair and Nabila have both recovered from their injuries. But a year on, Rafik and his children are reliving that story again and again.

“Although it’s painful,” Rafik said, “I want people to know that we are nice people, that we were going about our normal life, and that this happened to us.”

On Tuesday, the family took their story to Capitol Hill. They spoke at a briefing, the first opportunity for lawmakers in Washington to hear directly from Pakistani civilian victims of American drone strikes.

Only five members of Congress showed up.

In Washington, drone warfare is seen as a precise and effective tool against terrorists in faraway places. It’s been a key issue in the sometimes-tense relationship between the US and Pakistan.

And on Wednesday, there was a surprise. Pakistan’s government gave an official estimate of the number of civilians killed by drones since 2008. Just 67, it said. Other groups have put the number closer to 400.

I wanted to ask the family about that, about their government seemingly downplaying the effects of drone warfare while they’re here in the States to talk about their own experience.

When I began my question, I was interrupted. The family hadn’t been told, said Jennifer Gibson, a lawyer with Reprieve (a UK-based human rights organization) and the Rahman family's legal representative.

“You’ll be hard pressed to find anyone who thinks those numbers are legitimate numbers,” she said. She had decided not to mention the government estimate to the family yet, since they are doing so much to raise awareness of the problem here. She said she hopes the Pakistani government will correct the number, and it "just seemed like a conversation best saved for when they’re back in Islamabad.”

The children know their mother is waiting for them in North Waziristan.

“She was crying when I left,” Nabila said, “so I’ll be really happy to see her again.

“It’s just I know that when I return, I’ll be hearing the drones again. And I’ll be scared.”