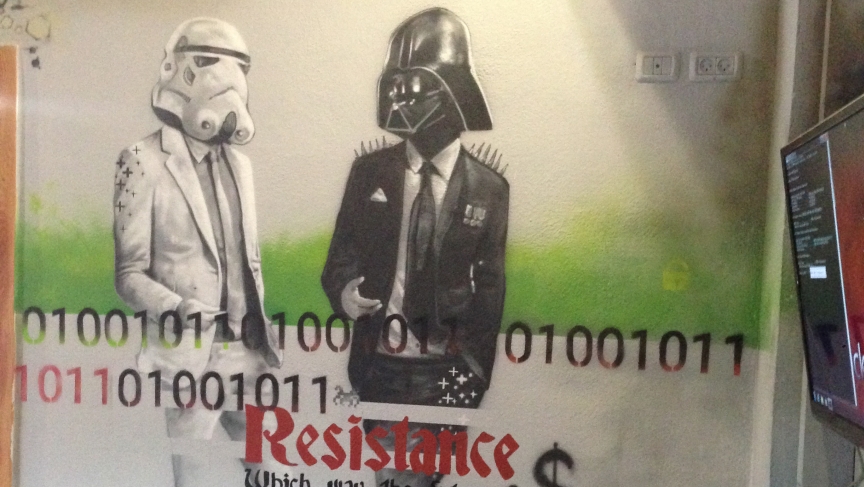 Darth Vader and his storm troopers are portrayed as hackers terrorizing the galaxy, in a poster for a training class at an Israeli electric company.

Cyber terror may sound like a good premise for a Hollywood blockbuster, but defense officials in Israel say cyber attacks are one of the biggest threats facing their country.

Israeli cyber experts say it's not a hypothetical threat. In early September, they say, a major artery in Israel’s national road network was gridlocked two days in a row, causing huge traffic jams and drawing attention on the evening news.

The Israeli road shutdown is reminiscent of the 2003 remake of "The Italian Job," which features criminals who hack into the traffic light control system to create what a character in the film calls “the biggest traffic jam in the history of Los Angeles.”

Israeli roadway operators insist the September shutdowns were due to a technical glitch. Yet an Israeli cyber expert, speaking anonymously, said a Trojan horse attacked the video camera systems on the tunnel toll road, automatically lowering the tolls barriers and shutting the road down.

The cyber expert said the virus seemed to be the work of hackers, not an enemy country like Iran. Still, according to Israel’s prime minister, Iran and its proxies Hezbollah and Hamas have tried to digitally attack Israel’s water systems, electric grid, trains and banks.

To thwart those cyber attacks, the Israeli government formed a classified National Cyber Bureau in 2011 and the military opened its first cyber defense unit last year.

Just recently, Israel’s electric corporation began an education program to ward off advanced cyber attacks. At the first day of classes last week, across from a power plant in the northern city of Hadera, power plant operators craned their necks in front of computer screens, learning how to identify when the system is being sabotaged.

The electric corporation’s training program also includes role-playing games: Hackers on the Red Team simulate cyber attacks in a room decorated with cartoons of villains like Darth Vader. In another room, the Blue Team sits next to a miniature model of a power plant as it is being cyber-attacked. The model floods and its temperature gauge goes wild, as attempts are made to stop the attack.

Critics contend the cyber defense industry is hyping up fears of cybergeddon. “Do you want to be safe, or do you want to be sorry?” a narrator says in the promotional video for the Israeli electric corporation’s training program.

“Because we are an electrical island [and] we cannot get support, any help, from neighboring countries, it’s much more important to be defended,” Hain said.

Most US states and European countries can rely on neighboring electric companies for backup, but Israel has no electricity sharing agreements with its Arab neighbors.

If the Israeli electric company is paralyzed, the water systems can’t run and the traffic lights shut off — a scenario reminiscent of a Hollywood thriller.