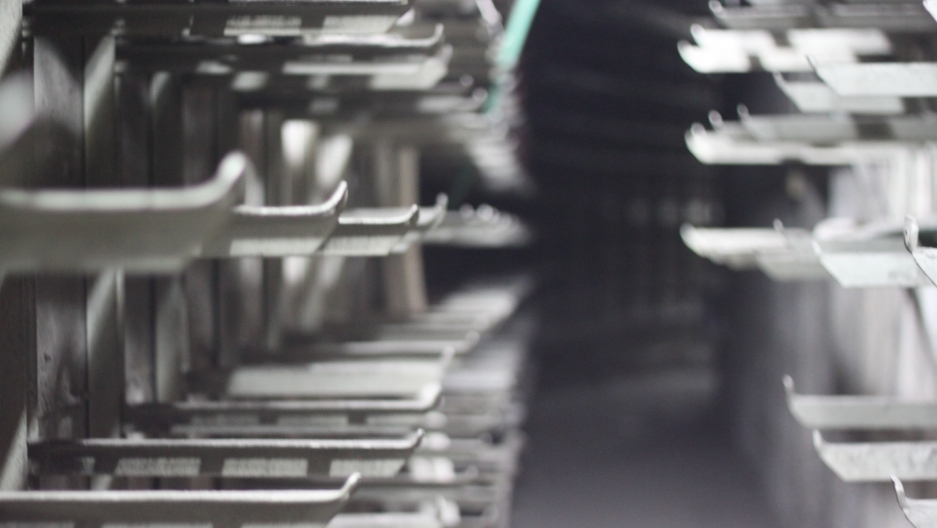 Still, even at second-best, there's nothing quite like the labyrinthine hall of mirrors that is the seven-floor Tel Aviv bus depot. Visitors to Israel traveling on buses inevitably find themselves there, trapped in a confusing maze of escalators and staircases.

The Israeli architect responsible for the hulking concrete monolith was a champion of a fortress-like, blockish style of construction called Brutalist. And it is indeed brutal to find yourself in an M.C. Escher painting of escalators and staircases leading nowhere.

“It’s megalomaniac,” said Israeli artist Yonatan Mishal, who has been exploring the bus station for more than a decade, and now leads his own tours there. “It’s a structure that was built out of a fantasy world.”

Mishal says the building is “meant to make people get lost in. And when they can’t find their way, they go shopping.”

What’s there to shop for? Today, there are a jumble of cheap stores selling cell phone covers and remote control toy helicopters. Most of the station’s shops closed long ago. About 60 percent of the building is abandoned — or is it?

There are people in the abandoned wings, whom some might call Israel’s unwanted. Children of Filipino foreign workers attend preschool and kindergarten in the Central Bus Station, and run around in one of its forgotten corners in the evening.

The station “is able to be a place for people to hide, or find their place where they have no other place,” Mishal said.

Ghosts also lurk in the station: 40,000 Jewish ghosts of the past. That’s the number of Yiddish books kept in this dank warehouse that is the YUNG YiDiSH library and museum. Yiddish was the thriving language of Eastern European Jews, but the founders of the Jewish state repressed it in favor of Hebrew, the language of the Bible. Most of the books still sit in cardboard boxes.

“This is a scene from Indiana Jones. Going to a place of secret crates of the government,” Mishal said.

Past a Filipino church and a breakdancing rehearsal space, we walk to the underground sections of the bus station, where people rarely tread.

“I have gone into places blocked off, sealed door, and I found people inside,” said Mishal. How did he get into those sealed places? “Like I am doing now with this door,” he said, prying it open.

A sign on the door says Danger, Entrance is Forbidden. “Yup, that’s where we’re going,” said Mishal. “You can’t follow the rules, because there are no rules in the Central Bus Station.”

Down a dark hall, I jump at the sight of a man’s silhouette at the top of a frozen escalator. It’s a statue of Charlie Chaplin, keeping watch in a movie theater complex abandoned in the 1990s. There’s debris everywhere.

Yonatan wanted to host a horror film festival in the cineplex, but the bus station management nixed it, saying the old movie theater does not meet modern safety requirements.

Past a locked synagogue, a hallway is filled with dusty pinball machines hiding in the dark – an accidental, spooky carnival funhouse.

The very bottom floor of the bus station is home to a nuclear bomb shelter, featuring thick, steel-blast doors.

If a shelter for a nuclear holocaust isn’t creepy enough, there are bats here – in bus tunnels blocked off in the 1980s when the structure was still being built, said Mishal.

“The bats, they’re just part of the scenery. They don’t do any harm. They’re not bloodsucking bats,” Mishal said.

Then, behind a wall of concrete, a door leads to a long, narrow tunnel flanked by metal claws. Mishal has no idea why the tunnel was built.

“I usually don’t take people here, because it is dangerous,” Mishal said, squeezing past the metal claws. “It’s like a Sigourney Weaver movie, Alien. She goes into these places. This is exactly what it looks like.”

At the very end of the tunnel is a wall covered with graffiti, every inch scratched with names.

“Who in the world are these people? Who came here and carved their names? No one comes here. Who are they?” Mishal asked. “I seriously raise the question of who these people are.”

“I think that if there will be someone coming in here with bad intentions, he can do whatever he wants,” Mishal said.

In this security-conscious country, where bomb squads are called in regularly to blow up forgotten backpacks, anyone can wander free in the murkier wings of Tel Aviv’s Central Bus Station. For fearless tour guide Mishal, the scariest part of his tour is that nobody’s stopping him from leading it.