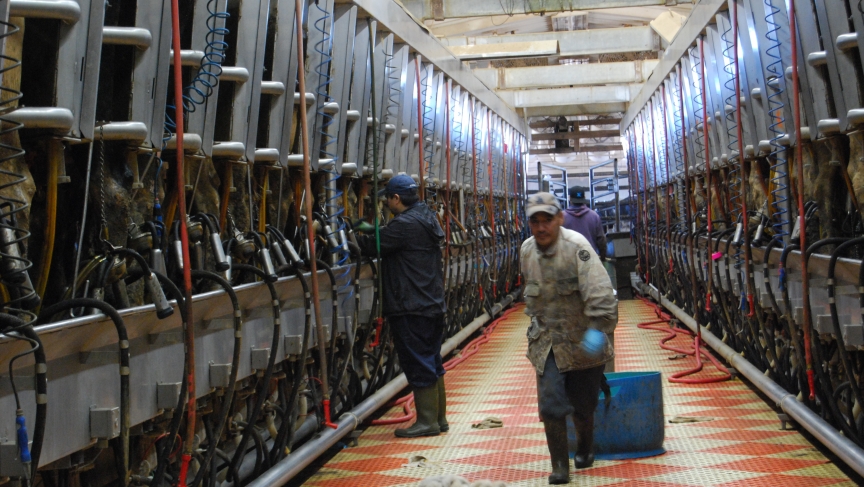 Perhaps 70 percent of workers at Idaho's dairy farms are foreign-born, mostly from Mexico, Guatemala, and Nicaragua

Milk is big business in Idaho. And that business is increasingly reliant on immigrant labor, a workforce that is vulnerable to the whims of the immigration debate in Washington DC.

There are three statistics you should know about Idaho’s dairy industry. First, Idaho is the third largest dairy state in the country, behind California and Wisconsin.

Second, the Idaho dairy industry brings about $3.25 billion dollars into the state’s economy. And finally, the people milking those cows and making all that money, they’re “probably about 70 percent foreign-born labor,” according to Brent Olmstead, a lobbyist for Idaho’s dairy industry.

Olmstead took me on a tour of a large dairy farm. A lot of farmers don’t want to talk to reporters, so Olmstead does it for them.

All the men I saw at the farm looked Hispanic. When I asked Olmstead if the workers were legal, he gave me the standard spokesperson response.

“All the dairies are required by federal law to fill out an I-9 form, which provides identification. And they do that.”

In other words, farmers check ID’s. What else can they do?

“Dairymen are exactly that, they’re dairymen,” said Olmstead. “They’re not experts on identification protocols. They’re not an enforcement arm, nor should they be the enforcement arm of the US immigration network.”

It can be a dangerous game, though. If the workers on these farms are unauthorized immigrants, and if a farm gets audited, the owners could be in big trouble. Raids don’t happen often, but plenty of stories circulate throughout the US about unauthorized workers getting detained, and crops dying on the vine. It’s been like this for decades now.

“And now what do we have? I think we have chaos,” said Idaho dairy farmer Terry Jones.

“And the government is at the center of this, and I think it’s shameful that out Congress doesn’t get their act together and get this thing resolved. They’re too busy back there worrying about who is going to get the credit for what, instead of what’s good for our country,” he said.

I met Jones at an Ada County farm bureau meeting, just outside Boise. Don Sonke, the bureau’s president, is also upset with Congress. But he points a finger, as well, at local farmers who stay silent.

“I don’t think there’s 10 percent of the workforce [in Idaho] that are actually here completely legal,” says Sonke. “Some of these owners, they’re not all that gung-ho about getting them legal, because they’ve got a handle over them if know they can control them that way.”

I asked Greg Hill, a public policy expert at Boise State University, if there was some truth to this — that the system is too profitable to fix.

“I think you’re reading into it correctly that there is essentially a shadow economy,” said Hill.

“Take the milk industry, for example. They’re not paying immigrants $5 an hour, illegal immigrants; they’re paying them $10 or $12 an hour. The value added to businesses with respect to illegal immigrants is that they are a mobile workforce that can fill a niche in a way that non-immigrants can’t.”

“Illegal immigrants are willing to work hard. They’re willing to work long hours. They’re an insulated work group that is very shy, they don’t want to come out and complain, they just want the money and they’ll do the work. It’s definitely what an agricultural state needs.”

Make no mistake though, Jorgenson is no crusader for immigrant rights. He wants to fix things by sending unauthorized workers back home.

“Idaho never used to have illegal employees. What we had was we had a lot of high school students who milked cows and did the fruit picking and things like that. Well, now those jobs aren’t available for those high schoolers.”

That’s a quaint argument to Brent Olmstead with the dairy farmers. He says he’s met with people in northern Idaho, where there are a lot of unemployed loggers, and he heard this same argument.

“I bet them $100 that if we went down and found an unemployed logger [and] offered them a job milking cows at $14 an hour in southern Idaho, that they wouldn’t take the job. The group I was meeting with would not take me up on the bet, because they knew that was true.”

Olmstead repeats his point: Idaho’s dairy farmers need a stable, legal workforce. That means granting work permits and allowing current employees to get right with the law. He doesn't profess a strong opinion on whether that should or should not include a pathway to citizenship.

But Olmtead isn't betting on change. After all, we haven’t seen significant immigration reform since Ronald Reagan’s time in the White House.

Perhaps farm owners need to speak up a little louder, if they want to be heard in Washington.