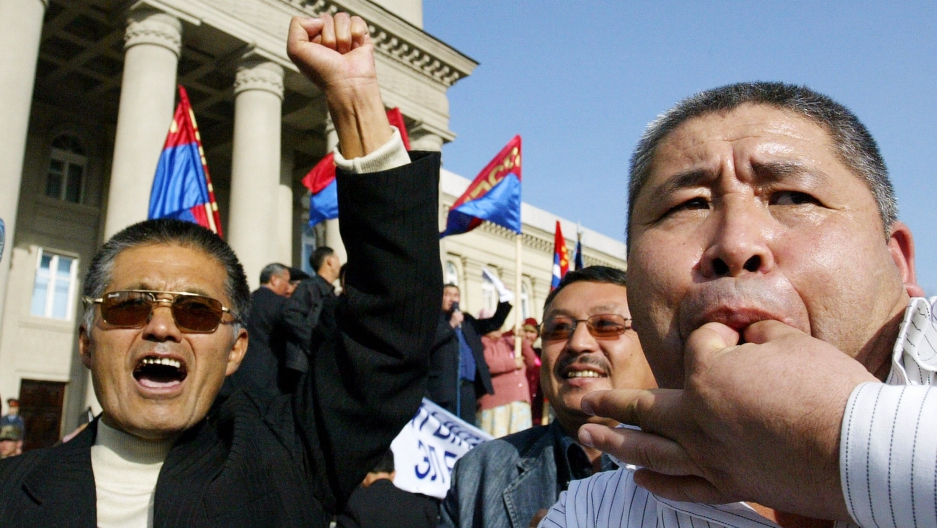 Editor's note: This is the first of a two-part series.

BISHKEK, Kyrgyzstan — Aibek Baratov is surprisingly mild-mannered for someone local police have come to fear.

Fiddling with his car keys at a shady café off a central square in Kyrgyzstan’s capital, the 31-year-old social media activist explains how he catches policemen on film violating traffic laws before sharing the footage on Facebook and Twitter.

He says he’s attracted a steady online following and an offer from the head of the country’s traffic police to collaborate.

“I see the results,” says Baratov, whose gangly frame and tipped baseball cap give him the demeanor of an American teenager. “Otherwise, I would’ve stopped three years ago.”

His success reflects the nature of life in post-Soviet Kyrgyzstan, by far the freest country in autocratic Central Asia.

But he admits that citizen activism elsewhere in the country — mostly rural, impoverished and bereft of widespread internet connectivity — has yet to take root.

“If you try to explain your thoughts to people, they’d think you’re from another planet,” he says.

After two revolutions in the last eight years, this relatively backwater nation is still coming to terms with the implications of democracy.

Young people such as Baratov had hoped the most recent uprising, a violent revolt in 2010 that swept away former President Kurmanbek Bakiyev, would finally usher in a period of democratic change.

In some ways, it has. But observers here say Kyrgyzstan still occupies a grey area: neither fully democratic nor authoritarian.

“There’s lots of freedom,” says journalist Zairbek Baktybaev. “But there is no responsibility.”

This vibrant, northern city of about 875,000 provides clues to Kyrgyzstan’s uniqueness.

Tucked into the Chuy Valley, it stands in the shadow of the snowcapped Ala-Too mountain range, part of the formidable Tien Shan system that splits the country into remote provinces.

Ethnic Kyrgyz and Russians mingle casually in grassy downtown parks, where young families stroll past bronze monuments to both Soviet and national heroes.

But the easy atmosphere belies the city’s bloody past.

When the April 2010 protests broke out, sending Bakiyev fleeing to Belarus and paving the way for a second political overhaul in five years, security forces firing from the roof of the presidential palace killed some 90 people.

The new interim government of President Roza Otunbayeva pushed through a new constitution that transferred more power to the legislature with the aim of making Kyrgyzstan Central Asia’s first parliamentary democracy.

Both were landmarks in the region, where autocrats in nearby Kazakhstan, Uzbekistan and Turkmenistan have long ruled with iron fists and varying degrees of personality cults.

Nevertheless, activists say that in practice, democratic concepts such as accountability and transparency remain unfamiliar.

Nuripa Mukanova, an anticorruption advocate and head of the PAC Coordinating Council, says her committees represent the “purest form of democracy,” having forced high-profile officials to publicly account for their work.

But she concedes that few ordinary citizens have patience for the day-to-day minutiae that comes with building democracy from scratch.

“It’s a concept that’s as new for citizens as it is for government agencies,” she says, adding that many remain caught up in a revolutionary fervor that demands swift action.

Most damaging, she says, is the “zero level” of trust in the political leadership.

It’s why some critics say liquidating the presidency altogether may be the best option.

Although the new constitution adopted in 2010 provided parliament with greater authority, the president retains the ability to nominate the defense and security ministers, as well as the Prosecutor General and judges — or “his people,” according to Ravshan Djeyenbekov, an outspoken independent parliament deputy.

He says President Almazbek Atambayev — a well-spoken former businessman — still has too much power at his disposal, including over the security service that’s successor to the Soviet-era KGB.

“When the president controls the law enforcement agencies, especially in post-Soviet countries such as Kyrgyzstan or others in Central Asia,” he says, “the enduring Soviet mentality means that people are predisposed to fearing those who control such powerful structures.”

Atambayev enjoys the support of a broad pro-government coalition in parliament, whose consent is virtually the only obstacle to installing favorable candidates throughout the executive and judicial branches.

Critics say the legislature acts more like a rubber stamp than a check on his powers.

But government supporters argue that’s fair game in a system where a parliamentary majority is key.

Chynybai Tursunbekov, leader of the pro-presidential Social Democratic party in parliament, says his camp is simply well-disciplined and sets the tone for the ruling coalition, which includes three other parties.

“Everyone sees that our party is consolidating its position,” he says. “And our opponents who understand this are trying to slander us and direct public opinion toward another direction.”

The international community first hailed Kyrgyzstan as an “island of democracy” in Central Asia in the early 1990s for pursuing deep economic reforms and developing a robust political culture.

Kyrgyzstan’s first president, an urbane physicist named Askar Akayev, won praise for allowing a degree of political breathing room and overseeing the country’s accession to the World Trade Organization, a first for a former Soviet republic.

But he became dogged by accusations of nepotism and corruption, gradually cracking down on protests and rigging the 2005 parliamentary elections that precipitated his ouster.

Bakiyev, the winner of the so-called Tulip Revolution that swept Akayev away, turned out little better. Critics say he exploited the presidency to harass opponents and enrich his inner circle — particularly his son Maxim, who the current authorities accuse of embezzling millions from the state as head of a development agency.

If history repeats itself, Kyrgyzstan seems to be proof positive.

But Mukanova, the anticorruption activist, remains hopeful. She says that while it may take time before the current political leaders regain the population’s trust, the basis is there.

If she were in any one of Kyrgyzstan’s autocratic neighbors, she said with a smile, “I probably wouldn’t be sitting here and giving you an interview.”

“That’s why I wouldn’t back away from the nickname ‘island of democracy’ just yet.”