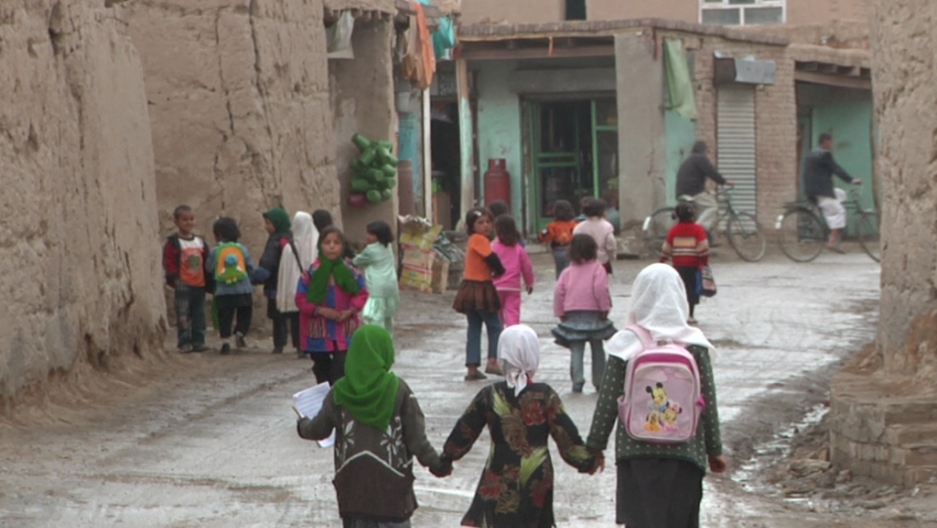 Editor's Note: This story has been revised to further protect the privacy and therefore safety of students and staff at the schools.

KABUL PROVINCE, Afghanistan — On the outskirts of Kabul, the mountainous land is rocky and dry, haunted by decades of war. Although the people here are fortunate to have avoided the violence that has pervaded other parts of the country during this fighting season—a time that stretches across the spring, summer and early fall—it is still a tense time in villages here.

This year marks the last full fighting season before the scheduled drawdown of US troops begins in earnest in 2014. People are not sure what to expect as the Americans prepare to leave, particularly in places that have seen enormous gains in rights for women and girls.
Of the 10 million children going to school in the country today, 40 percent are girls—compared to virtually zero girls in classrooms under Taliban rule.

As a documentarian I have gotten to know students, teachers and administrators at girls’ schools in Kabul Province, and returning now at such a tense time is a powerful experience. I find myself full of hope for the girls—many of whom are the first generation of educated Afghan women in their communities—delighted when I see how voracious their appetites for learning are; and also aware of how tenuous their futures may be.

Twelve years after the US kicked the Taliban out of power in Afghanistan—making it possible for girls to go back to school—there is a difficult question being asked here: Can the hard-won gains be sustained at a time when Taliban power is growing?

Since I was last here this spring, there have been six brutal attacks against schoolgirls – assaults ranging from a remote-controlled bomb explosion to mass poisonings through gas attacks and drinking water contamination. One school was burned to the ground.

Other challenges face girls’ education. According to the Deputy Minister for Education, rural villages—even those nearest the country’s capital—have trouble finding qualified female teachers. Of the 416 districts in Afghanistan, 166 have no women to teach the girls.

There are also social, cultural and family pressures that girls face—especially as they enter high school.

Despite the challenges, I also see the incredible progress that has happened here. The girls I meet are smiling and skipping as they arrive each morning, eager to enter the classroom, and in many cases become the first in their families—male or female—to read and write.

Their desire for education is palpable. The support from parents—mothers and fathers—to educate their daughters is real. And the learning that is happening? That is the greatest hope for the future of all.

In one seventh grade class I visited Saturday, several girls are vying for the number one ranking. On the playground they tease each other about the upcoming exams, and each playfully explains why she will come out on top.

At one school, students and teachers start a day of lessons that include Dari, English, religion, science, math, and life skills. The girls smile and wave at me; many stop and hug me as they pass, and some even tell me they love me. In the beginning, students didn’t know what to think of me, an American woman, traveling to a foreign country without her husband, questioning everyone and everything. But they approached me the same way they approach their lessons—eager and open and kind.

I’ve particularly felt a special connection with the teens, and with the teachers committed to giving them hope, knowledge, and a small measure of power in a culture so patriarchal that their fates are almost never only in their own control. Each child is a poignant reminder of the possibilities that exist in Afghanistan that could not have been imagined a decade ago.

As one student told me, “I have some education now. I know how a woman should live. I have learned what is right and what is wrong.”

Beth Murphy is in Afghanistan as part of a year-long reporting project to document the drawdown of US troops. The GlobalPost ‘Special Report’ is funded in part by The Ford Foundation. Beth is the founder of Boston-based Principle Pictures, a company dedicated to telling stories that excite curiosities and move consciences. She is director/producer for nearly 20 films, and her films have been broadcast globally on The Sundance Channel, The History Channel, Discovery International, Lifetime Television, PBS, NHK, and numerous other international outlets.

More from GlobalPost: In Afghanistan, 'force protection is the mission'