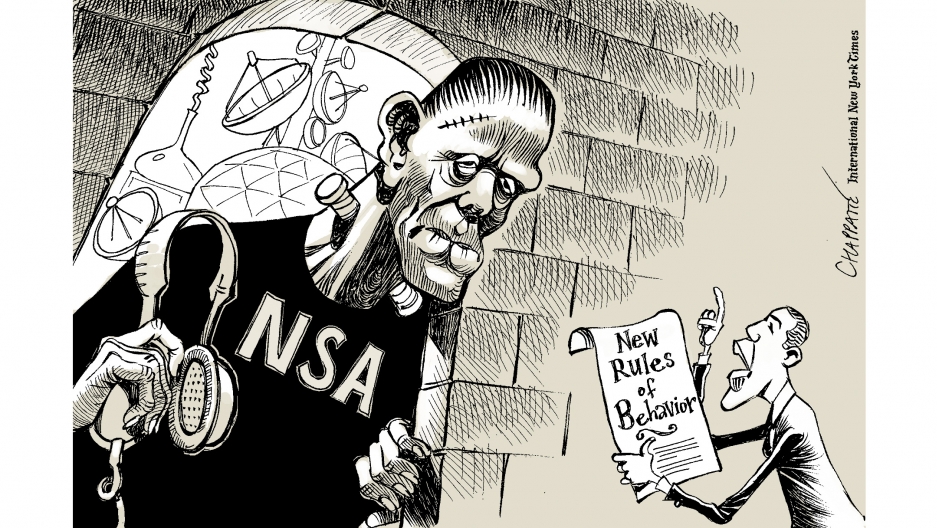 Halloween may not be the day to try to retrain the NSA, Switzerland's Patrick Chappatte suggests.

We all know that it’s easy for office politics to get out of hand. But in Russia's Dagestan region, a mayor took his workplace dispute to a whole new level.

So far, in fact, that he purchased a surface to air missile, as the BBC reports.

In Damascus, rebel-held neighborhoods have a choice: Surrender, or starve

Syria's regime has resorted to one of the oldest forms of warfare in its fight against rebel-held communities: the siege. PRI’s the World reports that the military is surrounding neighborhoods and preventing people and supplies from getting in or out.

India's Statue of Unity is doing the opposite

The man some expect to be India's new prime minister has a big project underway. It will be the biggest statue in the world, honoring a hero of India's struggle for independence. At nearly 600 feet tall, it will be twice as tall as the Statue of Liberty and cost more than $300 million ... in a country with widespread hunger, illiteracy and other problems. Critics call it a wasteful political maneuver, according to The Telegraph.

Bring on the circus, without the elephants

Animal-rights activists in Spain had a victory this week. Bullfights have already been banned. Now, the Catalonia region is ready to bar circus acts with animals. El Pais has the story.

Tragedy for African migrants not at sea, but in the desert

The recent drowning of more than 300 African migrants off the coast of Lampedusa, Italy raised awareness around the globe of the desperate hope of poor Africans who seek a new life in Europe. But for many of these migrants, the journey starts long before they reach the sea. Now, Al-Jazeera tells the tragic story of what happened when two vehicles carrying migrants broke down in a remote stretch of the Sahara. At least 92 people died, including men, women and children. 21 reportedly survived.

In case you missed The World's story earlier this week on the first intercontinental rail tunnel, here's what happened when it opened.

"The Turkish State Railways claimed the halts were caused by people who pushed the emergency button out of curiosity."http://t.co/FrNJwapfWy

Typhoon Krosa is moving across the main island of Luzon in the norther Philippines. Some 60 families were evacuated as 100 mph winds battered the province of Cagayan, 275 miles north of Manilla, according to the Straits Times.