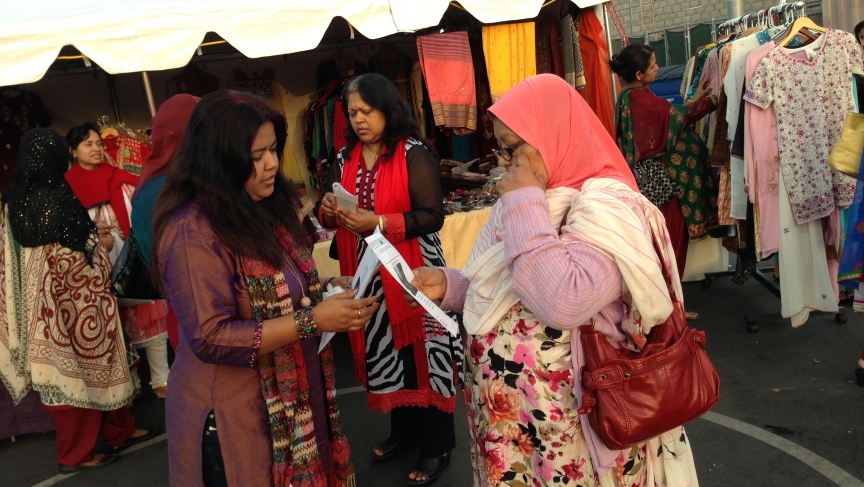 Nina Sharmin has set up shop in a restaurant in Los Angeles' Little Bangladesh neighborhood on most recent Wednesdays.

Deshi Food and Groceries is a favorite stop among South Asian immigrants who live in this part of the city. They come to feast on Bengali food, while news from their native country streams across a grainy TV screen.

But Sharmin isn’t here to eat. The health advocate is here to become a familiar face, so she can talk to people about healthcare.

She knows the Bangladeshi community is one of California’s fastest-growing immigrant groups. More than 6,000 people from Bangladesh live in Los Angeles, a sharp rise in recent years, according to a report by Asian Americans Advancing Justice.

Many of the immigrants in this community fall into low-income brackets. Nearly a quarter here are uninsured. Yet the community is often unaware or ill-informed when it comes to the new federal health insurance program. Many, says Sharmin, have never even heard the term "Obamacare."

"So, what will it be?" Sharmin asks. "They'll go without health insurance?"

Sharmin and outreach workers with the South Asian Network, a non-profit group, are trying to change that. They canvass people in restaurants, shops, and homes, going door-to-door to explain the Affordable Care Act. They're part of a wider force of nearly two dozen groups reaching out to California's vast Asian immigrant community to talk healthcare.

Often, Sharmin drops in unannounced at apartments in Little Bangladesh, handing out healthcare pamphlets in Hindi, Urdu, Punjabi, Gujarati and Bangla. Cold calls like this are possible, Sharmin says, because the South Asian Network has built up trust in the community over its 20-plus year history here.

Manju Kulkarni, the executive director of the South Asian Network, says South Asian immigrants are often skeptical of government programs because of the high level of corruption back home. "We tell them that things are different here," Kulkarni says. "They can trust the government and they don’t have to pay anybody off to get things done. This is not a scam. We’re able to provide evidence of what kind of benefits they’ll get."

As Sharmin moves through the neighborhood, an older man pulls her aside. He says he and his wife are insured through Medi-Cal, but his daughters aren’t covered. He asks about Obama’s new plan. Sharmin pulls out a pamphlet and explains who is eligible under the Affordable Care Act. She offers to meet him again, to help fill out the application. It's 32 pages long.

Outreach workers like Sharmin are required to go through three days of training to understand every page of the rigorous application process. They must also take an exam and score at least 80 percent in order to enroll people.

Kulkarni says many of her clients want healthcare, but don't have the language proficiency to understand the complexities of it. "Getting access to a doctor for the first time, being able to take their kids to the dentist, these are really important things for them, and part of what they see as the American dream," she says.

It’s a stark contrast to conditions back home. Kulkarni says most South Asian countries don't offer comprehensive healthcare coverage, and systems are known for being corrupt. Still, getting healthcare in the US is hardly straightforward. Kulkarni says many immigrants aren’t aware of the high premiums or exclusions.

As she tours Little Bangladesh, Sharmin comes across a group of women who insist they're not eligible for healthcare. After a series of questions, she learns the women qualify for Medi-Cal.

Sharmin remembers the hurdles she faced, when she first arrived here from Bangladesh 15 years ago. Her son was 3 and had kidney problems. Insurance for the entire family cost $500 a month. She ran out of cash in six months.

"Think about people who are just coming to this country, people who cannot even speak English," Sharmin says. "What will they do?"

As Sharmin approaches a bus stop near a busy intersection, she sees a woman wearing a headscarf and rattles off the usual questions: "Do you know about the new healthcare plan? Are you insured?"

The woman, Parul Katun, tells Sharmin she is from Bangladesh and that she moved here with her family two years ago. They have no idea about healthcare, but are interested. Recently, Katun says, her daughter fractured her knee, forcing Katun and her husband to pay $40 out of pocket each month. It may not seem like much, but the woman tells Sharmin she and her husband don't speak English and can't find work. Katun's 21-year-old son works at a gas station to support the family.

She also shares her own story.

"When I came to this country, I was in the same situation. But today, I’m OK," Sharmin says. "I can speak, I can work, my children are going to school.”

Katun smiles after learning Sharmin's son is now studying to become an accountant and her daughter is a software engineer.

Sharmin reassures her and says, “One step at a time."