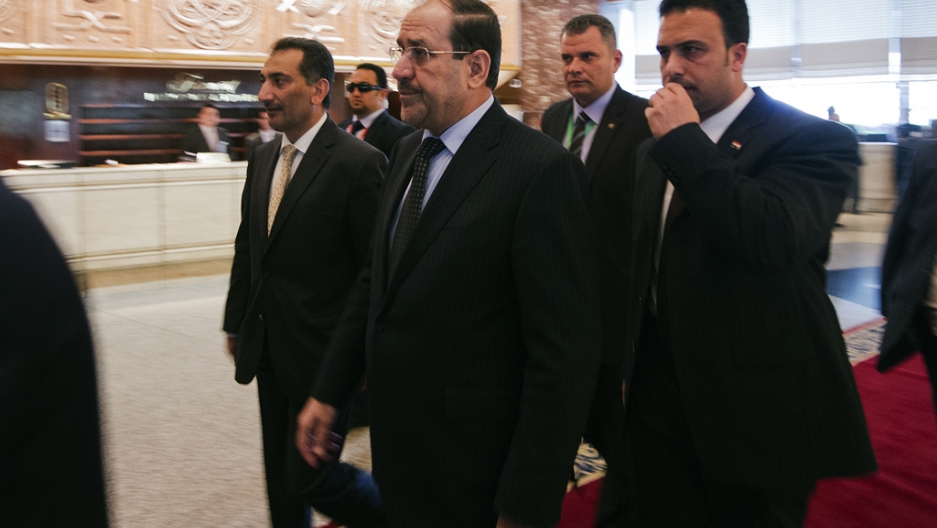 Iraqi Prime Minister Nouri al-Maliki spoke at the United States Institute of Peace Thursday, asking for the international community's help in fighting "terrorism" in his country.

He attributed the growing sectarian violence in Iraq to Al Qaeda's rise in neighboring Syria, insisting there were no problems between Iraqi Sunnis and Shias.

Maliki is scheduled to meet President Barack Obama at the White House on Friday to ask for more military aid from the United States. The Financial Times reported Maliki wants heavy weaponry, including combat helicopters and F-16s to combat a growing insurgency.

Two years ago, Iraq ushered out US troops by refusing to renew a security agreement that would have allowed more than a few hundred American soldiers to stay.

In the years since, violence in Iraq has ticked up. More than 5,000 Iraqis have been killed in attacks since April.

Maliki penned an op-ed in The New York Times Tuesday, outlining his message:

"And despite the terrorist threats we face, we are not asking for American boots on the ground. Rather, we urgently want to equip our own forces with the weapons they need to fight terrorism, including helicopters and other military aircraft so that we can secure our borders and protect our people."

“We know we have major challenges of our own capabilities being up to the standard. They currently are not,” Lukman Faily, the Iraqi ambassador to the US, told the Associated Press. “We need to gear up, to deal with that threat more seriously. We need support and we need help.”

Maliki may be open to counterterrorism training from US special forces and CIA advisers, according to Reuters.

The Iraqi president met Vice President Joe Biden and members of Congress on Wednesday and is due to talk to Defense Secretary Chuck Hagel on Thursday.

Several congressmen indicated to Reuters that they were not pleased with Iraq’s recent behavior. "It almost seems like after all the blood we lost and all the money we spent, that Iran seems to have more influence in Iraq than the United States does and that of course is a galling situation," Representative Eliot Engel, the top Democrat on the House Foreign Affairs Committee, observed.

If the US is not willing to provide Iraq with more weapons and other aid quickly, “we will go elsewhere,” Faily told the AP.