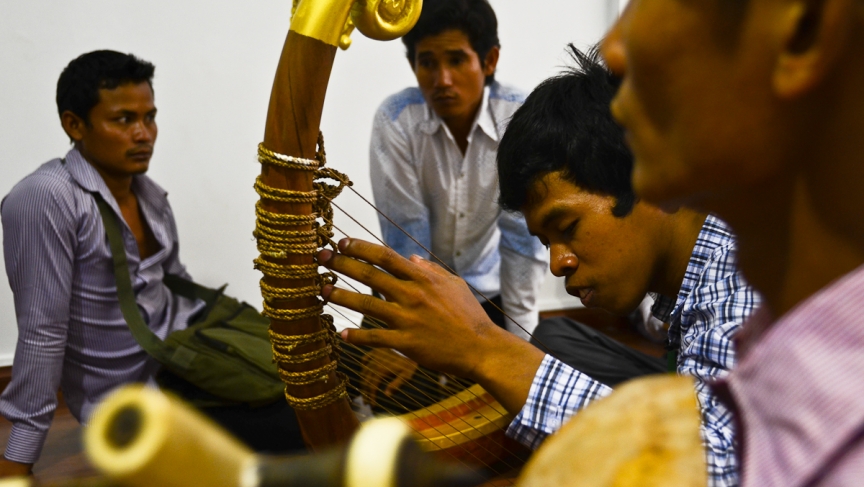 A musician strums the pin, the Cambodian harp, during a rehearsal in Phnom Penh.

In a rehearsal studio in Phnom Penh, a group of young Cambodian musicians is grappling with the sounds of a distant era. Sitting on the floor, one of them wraps himself around an ornate harp, tentatively drawing his fingers across the strings.

It looks like a smaller version of a classic western harp. But this one is curved like a boat; its neck stretches up from the ground in a flowing arc.

"This instrument disappeared maybe after the 13th century or 14th century. Nobody knows,” says Patrick Kersalé, a French ethnomusicologist who has worked in Asia for more than 20 years.

This year, he helped re-introduce this piece of Cambodia’s lost musical heritage.

Even though the harp vanished, its image remained, recorded on bas-relief sculptures carved into the walls of some of Cambodia's ancient temples and monuments. Kersalé started by tracing out the shape of the harp. He studied inscriptions that might shed light on how the harps were made and used, and he examined similar instruments that survived elsewhere in the region.

The challenge now is how to make an old instrument relevant today, when it hasn't been heard in centuries.

Cambodia's musical tradition is a story of survival through catastrophic decline, both distant and modern: The Khmer Empire was once the region's most powerful, but its collapse ushered in centuries of decay. And the brutal rule of Pol Pot's Khmer Rouge in the late 1970s saw many musical forms pushed to the brink.

"Now, when you ask Khmer people, how old is this music? They say 'Oh it's very old, before Pol Pot'. So the people don't know how old the music is,” Kersalé says. “I would like to help them to know their culture. Because the music is very alive."

One Cambodian trying to keep that music alive is a craftsman named Keo Sonan Kavei. Kersalé enlisted him to rebuild the harp. Kavei makes traditional Cambodian instruments, a skill he learned from his father.

When Kavei finished building the harp, the first one to play it was his 14-year-old daughter, Sereyroth. She’s since started harp lessons.

"These are Cambodian instruments,” Kavei says. “I want all Cambodians to be able to see them and hear them again."

Still, the harp's place in today's Cambodia is far from certain. Him Sophy, a Cambodian composer, says he’s thrilled that the harp has returned. But he doesn't want it to become some historical curiosity, admired like a museum piece. That's why he's writing new music for this old instrument.

"We have to think about how this instrument can continue to live,” he says. “If no people play your harp, maybe you only put [it] in the museum. And it could be lost again."

Back in the rehearsal studio, the musicians are practicing with some of the other instruments that Kersalé has rebuilt, including metal trumpets based on depictions of a military orchestra found at the famed Angkor Wat temple.

These long-lost sounds have been brought back to life. What remains to be seen is whether they will thrive in today's Cambodia or be living relics of another era, carved into an ancient wall.