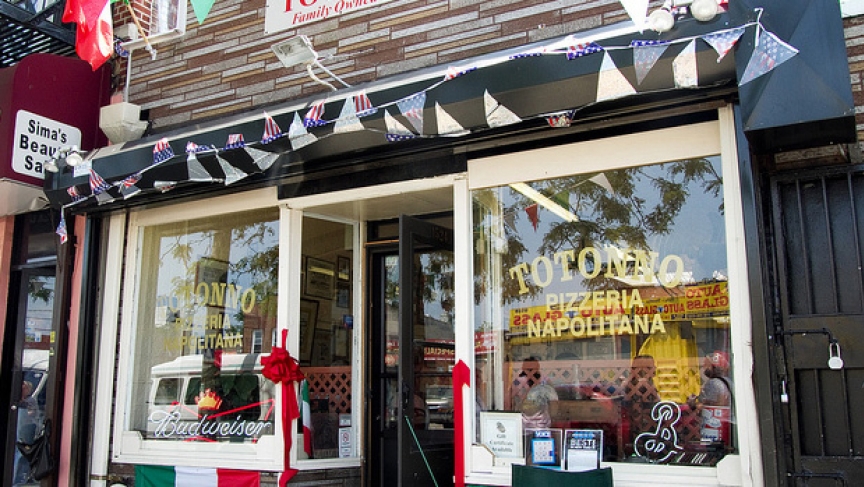 Totonno's Pizzeria in Coney Island, Brooklyn, was determined to rebuild after Superstorm Sandy.

A month after Superstorm Sandy hit in October 2012, Antoinette Balzano and her brother and sister, Frank Balzano and Cookie Cimintieri, were unsure about the future of their pizzeria in Coney Island.

Totonno's is legendary. The pizzeria was founded back in 1924 by their grandfather, Anthony Pero, who brought his pizza recipe with him from Naples. Legend has it, it was the first time Neopolitan-style pizza was served in the US

The grandkids were determined to re-open it — even after all the damage it sustained when Sandy roared ashore.

"I think we have to preserve what grandpa came here to do," Antoinette Balzano said a year ago. "We have to let that live on in the same fashion that he intended that to."

Well, grandpa would be proud. The siblings did reopen — this past March.

Standing outside her pizzeria recently, Antoinette Balzano was still shaken by memories from last year. But her resolve to maintain her grandfather's tradition of the Neopolitan pie remains strong.

"There are wonderful pizzerias in NYC, but nobody has what grandpa has," she said.

Pero first began making pizzas at Lombardi's in New York City before opening up his own place, Totonno's, out in Coney Island. Antoinette Balzano says Totonno's is the oldest family-run pizza joint in the US.

"Unless there's an older family that I don't know about, I think we're the oldest in the world [run] by the same family — and we're proud of that," she said.

If you want to try a slice of the legendary pie, Totonno's is open and the hours are the same as they were before the storm: Wednesday through Sunday from noon to 8 p.m.