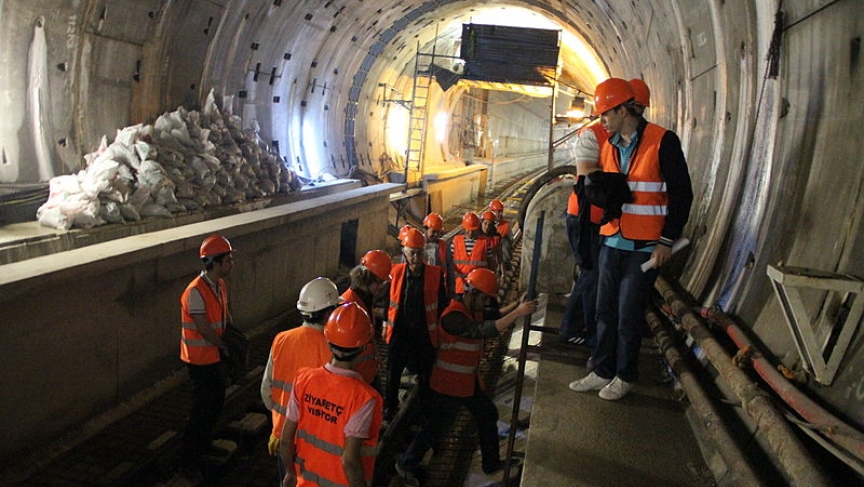 The world's first underwater rail link between two continents is open for business.

On Tuesday, Turkey unveiled its new eight-mile sea tunnel linking Europe and Asia via the Bosphorus Strait. But the "Iron Silk Road," one of Turkey Prime Minister Tayyip Erdogan's "mega projects" designed to change the face of Turkey, has its critics, especially over the project's $2.8 billion price tag.

The idea for this Bosphorus connection goes back 150 years — to the days of the Ottoman Empire. But it could only be achieved with modern technology.

So how is this new transportation infrastructure going to transform the geography of the region?

Sibel Bozdogan, a Turkish-American architect and architectural historian, says the new transportation link could eventually ease congestion in Istanbul, where an estimated two million of the city's 15 million residents crisscross the Bosphorus every day via two extremely congested bridges.

"We don't know many technical details about how that will be done," Bozdogan said. "If it is meant to enhance trade between Europe and Asia, what will be the logistics of that transit traffic of goods? In other words, will actual freight trains be running through the tunnels? How will Istanbul's commuter traffic overlap the transit traffic of this dreamed of new Silk Road, I really don't know at the moment."

Will the new tunnel help bring European and Asian cultures closer together?  Bozdogan said it's important to make a distinction between the idea of an economic, geopolitical bridge and the idea of a cultural bridge.

"Trains and tunnels may suffice with connecting with China and doing business, but if you're talking about truly connecting with Europe, it needs more than rail infrastructure," Bozdogan said. "It needs a democratic culture and openness to differences. And in this area, the distance between Europe and Turkey has been increasing, rather than decreasing, lately."

"The broader criticism is this government's, and, in fact, personally, the prime minister's rhetorical and political use of mega-projects as a PR campaign that turns engineering into political capital and silences opposition," Bozdogan said. "In other words, you know, for them, roads, tunnels and bridges are unquestionable instruments of progress. Any criticism or concern regarding, for example, historical heritage, environmental, or social justice, or, in this case, even safety — all of this is dismissed as subversive."

She said, "Erdogan loves this image of the prime minister in the hard hat."

Bozdogan gives as an example what happened when the excavation of the tunnel on the European side revealed a Byzantine port with more than 13 shipwrecks and thousands of historic relics that date back 8,500 years.

"[Erdogan] was the one during the excavation, when archaeological artifacts were found — these were amazing treasures from the fourth century — it was the prime minister who said that people are delaying progress for the sake of a 'few pots and shards,'' Bozdogan said.

"Continents are crossed, bigger, deeper, taller structures are built and we're all expected to be grateful, never mind the lack of transparency, lack of oversight, lack of public participation. So this government is unable to understand why we are not bending over in gratitude."