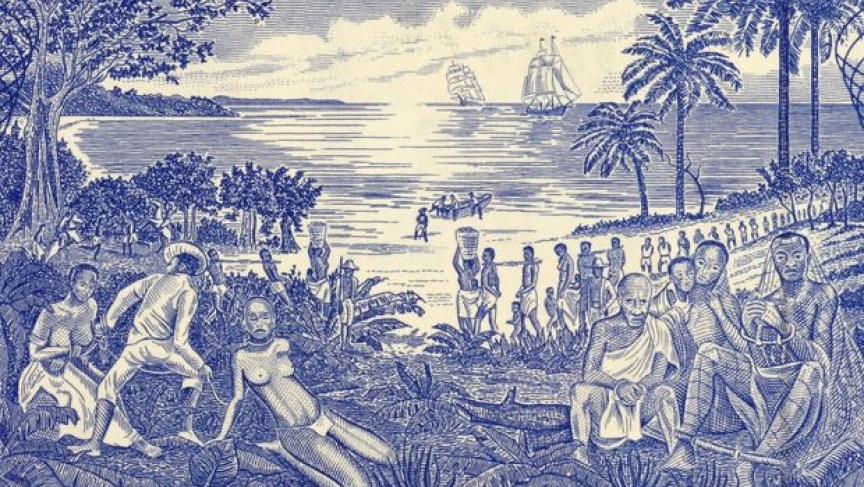 This image of slavery is depicted on the 500 peso bank note issued in the country of Guinea Bissau in West Africa.

Countries once involved in the Caribbean slave trade want to put a price on the suffering slavery has caused the region.

Fourteen Caribbean nations are asking former colonial powers Britain, France and the Netherlands to pay for damage they say was caused by centuries of slavery and racism.

Staceyann Chin, a Jamaican-American writer and activist who lived in Jamaica until she was 24, says the vestiges of the slave trade remain entrenched in Caribbean society.

"The power hierarchy very much resembles the color hierarchy that was in place when slavery was in place," she said. "The lighter skinned you are, the more opportunity you have, [whereas] the darker skinned people are still at the bottom of the economic ladder."

This extends to everything from homeownership to educational access. But making reparations is not just about money, Chin argues.

Martyn Day is a senior partner at Leigh Day, the British law firm litigating on behalf of Caribbean countries. He says in the last 15 years, there have been a series of cases of groups seeking compensation for severe mistreatment, including a case his firm wrapped up earlier this year.

"We represented the Mau Mau group of Kenyans who were tortured by the British in the colonial era back in the 1940s and 50s," Day said. "We were able to successfully claim compensation for a group of about 5,000 of them."

Other legal victories of the sort include compensation paid to Japanese Americans who were held in US internment camps during World Word II.

Day says it's crucial to remember that Britain built its industrial revolution on the back of the slave trade in the Caribbean countries that are now seeking compensation.

"Although it was legal in a formal sense here in Britain, we as a country were growing rich at the behest of all these millions of slaves taken from West Africa to the Caribbean," Day says.

He says there's an obligation for the British government to try to resolve the suffering that came as a result of slavery.

Or as Chin puts it: "It's a no-brainer that people should be given the opportunity at least to reap some of the benefits that the labor of their ancestors provided for those who enjoy them now."