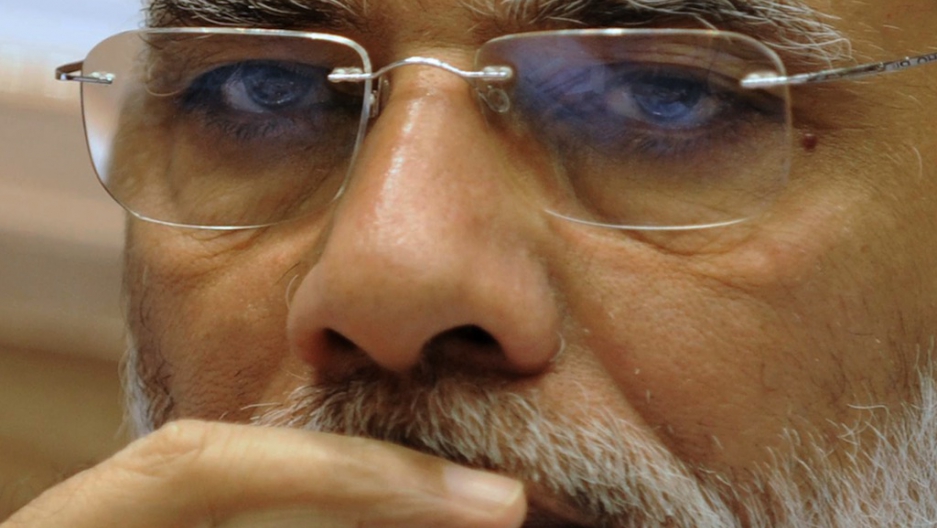 Controversial Hindu nationalist candidate Narendra Modi stands a good chance of becoming India's next prime minister, after the May 2014 elections. He hasn't spoken to his wife in 45 years.
Credit: Raveendran
Share

UPDATE: On April 10, 2014, Indian prime minister hopeful Modi admitted for the first time that he is indeed married.

AHMEDABAD, India — For any world-class politician, an articulate, telegenic or otherwise appealing spouse is an obvious asset. Think Carla Bruni, Peng Liyuan or even Hillary Clinton.

But the man who many believe will become India’s prime minister after the May 2014 elections has an unusual relationship with his wife.

They are still married, but decades of silence separate them. They have not spoken in 45 years, her family told GlobalPost.

That’s not to say Jashodaben Modi would describe herself as estranged from her husband, Narendra Modi.

On the contrary, she is highly devoted to the energetic, charismatic politician from the Hindu nationalist Bharatiya Janata Party (BJP).

Mrs. Modi rises at 5 a.m. daily and heads to her village temple to pray that her husband and his party win next year’s parliamentary vote.

The 63-year-old retired schoolteacher even attends her husband’s rallies — incognito, in case his political allies or opponents recognize her.

“She goes to his speeches to see him, but she never tells anyone. She doesn’t tell anyone who she is,” her niece, Nirali Modi, a 25-year-old teacher, told GlobalPost. “He doesn’t know. They have not spoken since he left.”

Mrs. Modi’s relatives say her husband left the family at 18 years of age, to further his political career in a Hindu nationalist organization that forbids its key workers to marry.

Modi would have lost his position had he revealed the marriage. He may never have risen to chief minister of Gujarat — a business hub with a population similar in size to France’s. And he may never have become the man the BJP hopes will beat Congress candidate Rahul Gandhi to end a decade of opposition.

Even without his rarely talked about secret wife, Mr. Modi is a deeply controversial politician.

Although his followers virtually worship him — one said he adored Modi "like God" — many opponents despise him for his role in anti-Muslim riots in 2002 when more than 1,000 people died.

Modi is the embodiment of upward mobility in a country that remains wedded to its rigid caste system. As a boy, he sold tea on the platform of the railway station in his home town. Since 2001 as Gujarat’s most powerful leader, supporters credit him with boosting the western state’s impressive economic fortunes.

Foreign investors and India’s major conglomerates flock to Gujarat to do business. Tata manufactures cars near the main city of Ahmedabad. A new Ford factory is due to go into production next year.

But unlike many other emerging market politicians who achieve popularity with executives, Modi boasts that his accomplishments have also benefitted average residents. Gujarat has an enviable network of pothole-free roads, and power cuts are a rarity — a huge contrast to the rest of India where some villages go without electricity for days.

Critics say Modi is merely reaping the benefits of previous administrations that planned infrastructure projects long before his rise to power.

Yet although he has firmly established the Modi success story in the minds of Indians, he cannot shake off the horrific events of February and March 2002, which led to the nickname the Butcher of Gujarat.

A train at Godhra station carrying Hindu pilgrims and activists was set on fire, killing 58 people including 15 children.

Muslims were blamed for the attack, and Gujarat erupted in violence. More than 1,000 people died, most of them Muslims killed in revenge by Hindu extremists, who roamed the streets with swords and kerosene cans, chanting Modi’s name, according to Human Rights Watch.

Opponents say Modi failed to act to prevent the massacres. Some former police chiefs have claimed that he told officers to stand by and let the violence run its course — allegations denied by Modi supporters. The United States government canceled his visa in 2005 and has not granted one since.

Modi refuses to answer questions about the riots, even walking out of a TV interview in October 2007 after being asked why he would not say that he regretted the killings.

In July 2013 he caused outrage by comparing the victims’ fate to his sadness at a puppy being run over by a car.

While he is reluctant to speak about the Godhra massacre, Modi refuses to even acknowledge that he was ever married.

His marriage to Jashodaben was arranged by their parents (as is customary in India) from the same Modi caste, when they were about 3 years old.

The religious ceremony took place when they turned 13, but when the time came to consummate the marriage at the age of 18, Modi refused and left his home town of Vadnagar after a family row.

Jashodaben became a teacher, working in a mostly Muslim village until she retired three years ago.

Her niece Nirali told GlobalPost: “She is a very religious woman. She likes simplicity and modesty.”

And despite her husband’s success, she is eager to remain a private person. “We have had lots of people come here, even Rahul Gandhi’s personal adviser, but she doesn’t want to talk to any of them,” said the niece.

Narendra Modi’s family is just as reluctant to talk. His elder brother Somabhai agreed to meet GlobalPost after we spoke by phone, but was nowhere to be seen when the time came.

By the age of 18, Modi had joined a right-wing Hindu organization called Rashtriya Swayamsevak Sangh, a movement founded in 1925 during Indian resistance to British rule.

The RSS was banned temporarily after former member Nathuram Godse assassinated Mahatma Gandhi in 1948. By the 1980s it had become mainstream and was the driving force behind the newly formed BJP.

Nilanjan Mukhopadhyay, the author of Narendra Modi: The man, the times, said: “The rules of the RSS did not allow Modi to marry.

“He was a pracharak, a propagandist who lived and worked for the RSS full time. If he had admitted the marriage, he would have lost his position.”

But Modi is highly sensitive about the marriage. He was upset enough to personally intervene when Indian journalist Darshan Desai investigated Jashodaben’s story after the 2002 riots.

Desai managed to meet the ever-loyal Jashodaben in her village, only to receive a phone call from Modi who accused him of having an agenda and going “much beyond” even the worst accusations against him about Godhra. Desai has admitted he felt “nervous” about the phone call. He confirmed the incident to the GlobalPost but declined to add details.

In fact, Modi appears to be proud of his status as a single man, and uses it as a political tool.

Kingshuk Nag quotes Modi in his biography “The NaMo Story” as saying in a political speech “I am an honest man, vote for me. I cannot be dishonest. I don’t have family to look after.”

“People in India believe politicians become corrupt because they are under pressure from their wife or their mother or their brother or sister,” Nag said. “He often makes this comment in his speeches.”

There is a Hindu tradition of Indian men turning their backs on family to devote themselves to a cause, Nag added, which means voters do not view his single status with the suspicion that a politician in the West might encounter.

Modi’s success as Gujarat’s chief minister since 2001 is often described in business terms — unsurprising for a man who is feted by billionaires such as Mukesh Ambani and Ratan Tata.

He starts work at about 6 a.m., far earlier than his predecessors, and is renowned for his ability to grasp the finer details of government affairs.

“He is an extremely efficient service provider, the finest CEO this country can have,” his biographer Nilanjan Mukhopadhyay said. “He is a most competent manager and an extremely organized delegator of authority.

“He believes he has a god’s gift. He told me he gets sudden flashes of brilliance and tells his staff to implement his ideas.”

But Modi’s electoral success is not only about his organizational skills. He does not simply have supporters — he has devotees.

About 100 fans came to watch Modi open a new park in Ahmedabad earlier this month. One covered his clothes in badges featuring the politician’s face.

They call him "NaMo" — not just a J-Lo-style nickname but a Gujarati word that means both "hello" and "surrender" — and chant his name like a rock star.

He has cultivated a strongman image, with crowd-pleasing anti-Pakistan rhetoric, and a PR team that is always ready to promote him as a man of action.

Tattoos of Modi’s name, and the lotus flower, symbol of the BJP, have apparently become popular in Gujarat and Mumbai.

Shops in Ahmedabad sell the "Modi kurta" — a particular style of the knee-length collarless shirt worn by many Indian men.

He was the first major Indian politician to embrace the power of social media, with a Twitter account and a fully featured website rather than the Facebook fan page of the Congress candidate Rahul Gandhi.

Fans can even play games on their phones to help Modi defeat Congress. In Modi Run, players control the candidate as he tries to jump from platform to platform, gathering the votes that are scattered around each of the 18 levels which represent India’s states.

Modi’s biographer Kingshuk Nag compares him to an avatar of Hinduism’s supreme god Vishnu, Kalki, who will ride on a white horse with a blazing sword to rid the world of corruption.

“He is trying to create this image as a sort of superman,” Nag said. “He wants people to think of him as the Kalki avatar, and he will deliver the country from the Italian lady [Sonia Gandhi].”

A vital part of Modi’s appeal seems to be that women find him attractive, with frequent analyses in the Indian media of what draws women to him.

Bollywood actress Mallika Sherawat described him as “the perfect bachelor” and sent him a YouTube video in which she sings Happy Birthday, although not quite as well as Marilyn Monroe did for John F. Kennedy.

Jashodaben may have something to say about that.

That is, if she were talking.