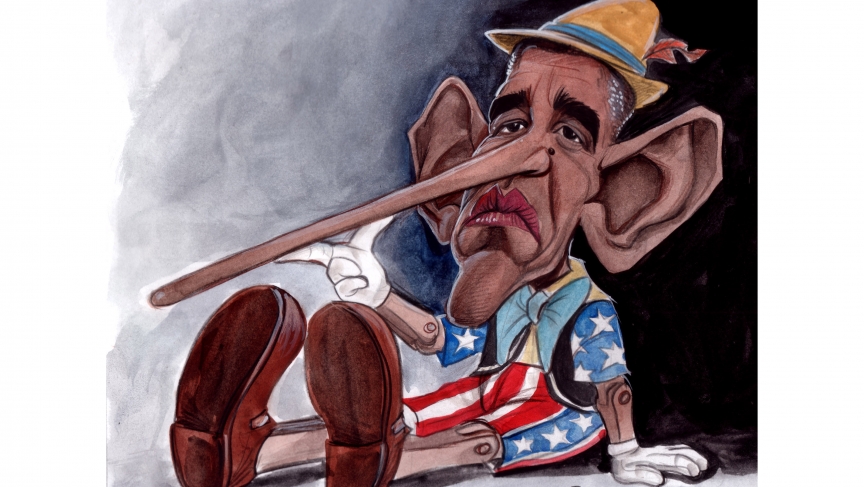 Croatian-born cartoonist Petar Pismestrovic is clearly angry with Barack Obama — and not believing the words he says.

New species of insects or plants are discovered practically all the time — but it's not often that scientists discover large mammals, like dolphins.

Scientists recently discovered a new species of humpback dolphins, living off the coast of Australia. The discovery is so new, according to The Washington Post, that the species hasn't even been named yet.

Self-help advice for the creative class

Artists, musicians, and creative people throughout history have sworn by their routines — anything to seduce the muse. Balzac had 50 cups of coffee a day. Hemingway started his day early to benefit from the calm and cold. Ben Franklin lounged around naked each day. PRI's The World has a list of the six common habits of highly creative folks, based on a book and a reporter's experiment.

The Taipei Times reports that Taiwan’s President Ma Ying-jeou will receive increased security after a series of incidents involving shoes. Yes, shoes. Twice in the past week, protesters unhappy with Taiwan's economy and policies have hurled shoes at the president. He's not been hurt in any incident.

'Presidential hopeful Gul Agha Sherzai... opted for a bulldozer to match his nickname.'

The Atlantic reports on Afghanistan's preparations for its presidential election next year. The country has an illiteracy rate of over 60 percent. So election officials are giving each candidate a logo to help illiterate voters identify their preferred next leader on the ballot. Would you represent yourself as a pencil?

Bob Marley himself couldn't say it better: No woman, no drive

Over the weekend, women in Saudi Arabia staged a protest against the country's informal ban on women driving. Some drove and posted videos of their trips on social networks. But PRI's The World reports that the social video that got the most play was from a Saudi comic who rewrote a Marley tune for the occasion. It's amazing.

The St. Jude storm that battered the UK and much of northern Europe killed 13 people on Monday and left 300,000 homes in the UK alone without power, according to the Weather Channel. Most of the deaths came from falling trees, triggered by the storm's greather than 100 mph winds — hurricane-force, though the storm wasn't a hurricane because it was out of the tropics. Of course, at least one person made the best of the storm. Brazilian surfer Carlos Burle rode what's believed to be a record-breaking wave — perhaps 100 feet tall — off the coast of Portugal on Sunday, according to the UK's Mirror.