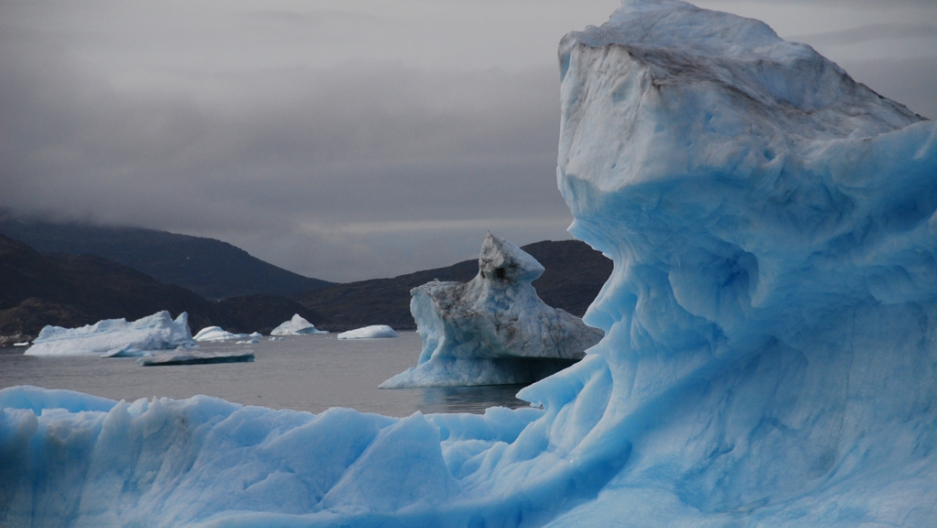 BROOKLYN, New York — According to the Intergovernmental Panel on Climate Change (IPCC), Earth's climate system is a "complex, interactive system consisting of the atmosphere, land surface, snow and ice, oceans and other bodies of water and living things."

And, yes, the scientific community pores over all kinds of data related to this system every day.

But how should ordinary people think about the science of what's happening right now to the planet? And where do we go from here?

Paul Mayewski is the director of the Climate Change Institute at the University of Maine at Orono. Photo courtesy of Paul Mayewski.

To find out, we turned to climate expert Paul Mayewski, the director of the Climate Change Institute at the University of Maine and the science adviser for GlobalPost's yearlong investigation Calamity Calling.

For the past four decades, Mayewski has studied how the climate works and documented how it’s changing.

In a wide-ranging interview with GlobalPost, he explains how scientific research into the past can help us understand the dramatic changes we’re seeing now, and how it just might help us find new ways to cope with inevitable warming.

GP: Were you ever a climate change skeptic?

Mayewski: As recently as 20 plus years ago, scientists thought that the climate system operated very, very slowly. We thought it was such a big, powerful system that it could literally absorb anything that we small humans had ever done. So we’ve obviously changed our opinion greatly.

So when was the moment when you suddenly thought, "Wow, there’s no denying this anymore?"

There were a bunch of moments. When we realized the Antarctic glaciers along the coasts were changing their size faster than ever. When we realized it was getting harder and harder to collect un-melted records of ice cores. When we started traveling to remote places and realizing that the air quality and the noise quality and the visual quality were completely different than the places we lived and we could prove how much humans had impacted climate using our ice core records.

What do you say to skeptics now?

I used to say to the skeptics, "Thank you for questioning what we do and for making us think more about the science because it’s a healthy process."

As of three or four years ago I gave up saying that, because now the skeptics are trying to blur the facts. They are trying to provide misinformation, take information out of context, make it a political issue, which it is not. They’re not basing their arguments at all on the science.

Where are the places we’re already seeing evidence of climate change?

In parts of the Arctic in the last five years we have experienced temperature changes as great as 9 degrees Fahrenheit. That’s unbelievably big in five years. We've also seen drought impacts, in places like Australia, large portions of West Africa including Mali, the Midwest and Western United States. And all of these changes are related to changes in how often moisture-bearing winds come in and the direction that they come in from. And that’s directly related to warming.

What coming changes scare you the most?

The health implications. The idea that you can be in a place that either has a tremendous amount of pollution or that has an emerging level of pollution. The fact that disease can be migrating into your area because of an emerging level of warming. The fact that you can be living on the edge of a desert that could very well expand. These are all in my opinion health and welfare risks.

We all live on the edge of climate health risks. And that’s why this is a global security issue.

The latest report from the IPCC says the amount of greenhouse gases we have in the atmosphere already will cause a certain amount worldwide warming. So there’s no stopping this shift?

It is absolutely inevitable. So while mitigation is still a powerful and important tool, people are talking much more about adaptation. And this has all changed in basically five years, the belief that we could stop all of this to suddenly realizing, yeah, we need to adapt to it.

You really think we can adapt?

We have no choice.

You helped discover rapid climate change. Can you describe precisely what that is and how it’s relevant today?

In the late 1980s and early 1990s, I ran a program in Greenland that allowed us to get a very long, 110,000-year-long, year-to-year record of how the climate operates. And what we discovered is that there can be very, very quick changes in atmospheric circulation patterns.

What we were able to demonstrate is that the jet stream can basically be pushed into more winter-like or more summer-like conditions in just a couple of years and stay in that state. What does that mean? Within a couple of years, you’re living in a place that has not three months of winter but 11 months of winter — not two months of summer but five months of summer. And once it does that, it can stay in that direction for a long time.

Sometimes people say climate change will produce winners and losers regionally, and humanity will simply have to move where it grows food. But isn’t there a risk the whole world could become less conducive to agriculture?

Will the world end up with too few production areas? There’s obviously immense debate about whether even under current conditions — if the population increases as fast as it is — we will have enough resources for people. And there are already parts of the world, Africa in particular, where we don’t have enough of the most important resource, which is water.

Is water one of the resources most threatened by climate change?

Water is the new oil, except it’s way more serious than that. We have to have water to survive. The IPCC has come up with some very impressive models, ensembles of models, that show where drought will be most significant.

Many of these coincide exactly with what we’ve been able to demonstrate in the ice cores. There have been areas seriously impacted by drought in the past, where civilizations actually had to move.

With the mixed message mainstream science sent on climate change for two decades or more, to what extent do you think science failed the public?

I think that science is a big thing and to collect all of the data necessary for the entire scientific community to really get behind this takes time. I wouldn’t say that science failed society. I would say that it’s a combination of science not getting the answer fast enough and then the information not being distributed well enough. And as a great a fan as I am of the media, I think that the media — by implying that there is even a scientific argument — has done a disservice.

Speaking of the media, journalists often drive scientists nuts by bringing up specific events like Hurricane Sandy or recent storms in Mexico, and asking, "Is this climate change?" Sorry to do this, but — is it?

Is the only reason that Hurricane Sandy existed because of human activity? No. Is the likelihood that it was as large, and is the likelihood that we will have more such events, because of human events? Yes, absolutely. You warm the oceans, you create instabilities in air masses, you warm the Arctic and these are the kind of things that you get. This is the way the physics of the climate system operates.

It is another of the inevitable things. So, we have to assume that these sorts of situations will simply get worse in the future because of what we’ve done.

Who are the victims?

I’m co-teaching a class in abrupt climate change business and policy and we keep talking about visuals, victims and villains. The way that the media and many of us portray things. The visuals are clear. The victims are clear — they’re us, all over the place in varying degrees. One of the big problems is that we’re all the villains. We’ve all wanted this sort of lifestyle.

But this is one of those situations in which we actually have to forget about who the villains are. We have to treat this almost like an extraterrestrial threat. The movie "Independence Day" is a great movie because of the message that the only way the world gets together is when everybody realizes they’re being threatened in the same way.

In the case of the modern interpretation of climate change, we’re not actually all threatened in the same way, but we all have the same kind of security issues. For some of us it’s storms, for some of us it’s drought, for others it’s heatstroke and disease.

The faster we get that message out, the faster we realize that we are in fact being attacked by this thing that we have created ourselves.

Paul Mayewski is the director of the Climate Change Institute at the University of Maine, and the science adviser for GlobalPost's yearlong investigation Calamity Calling. He's led more than 50 research expeditions to the world's most remote locations and authored more than 350 research papers and several books, including, most recently, Journey Into Climate. He's also spearheaded the creation of 10green.org, a site that allows you to track pollution in your neighborhood.

This interview was condensed and edited by Solana Pyne and Thomas Mucha.