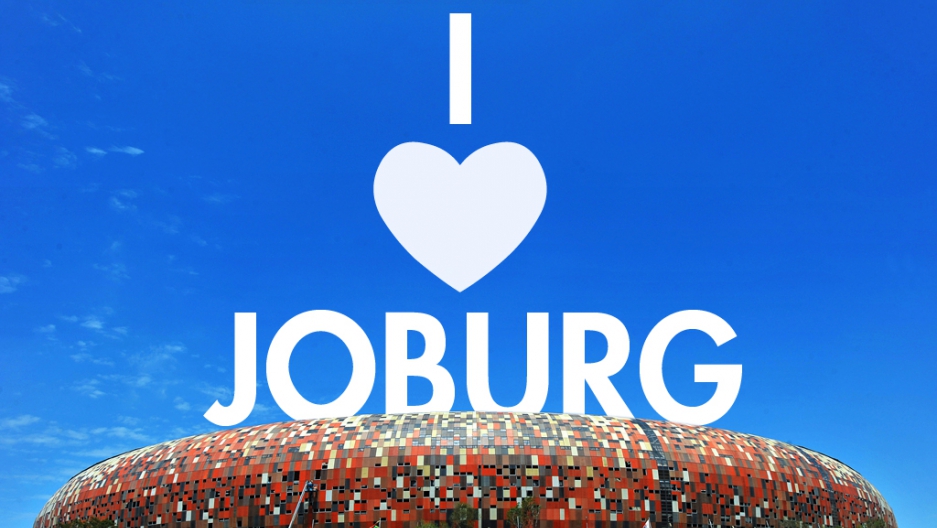 Photo shows Soccer City stadium, which resembles an African cooking pot, in Soweto just outside of Johannesburg on December 13, 2009. Soccer City Stadium is the main venue for The FIFA 2010 World Cup, held for the first time in Africa, and the stadium will host the opening match between South Africa and Mexico as well as the World Cup Final match. AFP PHOTO / ALEXANDER JOE (Photo credit should read ALEXANDER JOE/AFP/Getty Images)
Credit: ALEXANDER JOE
Share

Saying "turn left at the robot" is an impressively futuristic-sounding direction.

2. The name "Johannesburg" is too long, and so the city has a plethora of nicknames: Joburg, Jozi, eGoli ("City of Gold").

3. The city was built on gold mines. Literally.

The southern part of Johannesburg is dotted with "slag heaps" — odd yellow hills revealing the history of mines past. Some of them are good for sandboarding.

5. In Yeoville, you can try food from all over Africa.

6. Within an hour and a half of Johannesburg, you can be on safari, watching lions and elephants and rhinos, oh my...

7. Woolworths still exists here, and it is the best thing ever.

South Africans call it "Woolies," and it is a far cry from the five-and-dime stores of America's past. In South Africa, Woolworths is an upscale grocery store chain with convenient, posh food.

8. South African hipsters. But not in a bad way.

Stunning thunder and lightning storms rage over Johannesburg during the summer rainy season, sometimes for an hour a day. The best view is from the Ponte tower downtown.

11. Going out for a nice dinner and several bottles of South African wine with friends won't cost you an arm or a leg.

12. The Gautrain takes you to the airport in 15 minutes.

13. Johannesburg is sporty, in a post-colonial way.

There's soccer at Soccer City, cricket at Wanderers and rugby at Loftus in Pretoria just down the road.

14. Weekend markets in Braamfontein and the Maboneng district revitalized areas of downtown.

With morning and evening editions! Newspaper hawkers in the street! Posters with the day's most salacious headlines plastered in street lights!

16. Johannesburg is an African melting pot — a mix of people from South Africa, the African continent, and around the world.

19. Johannesburg is a fashion capital, a hub for African designers, with inspiring street styles.

20. The sunset over the city skyline.

21. And every November, Johannesburg turns purple.

Erin Conway-Smith is GlobalPost's Senior Correspondent for South Africa, based in Johannesburg. Follow her on Twitter: @ejcs.