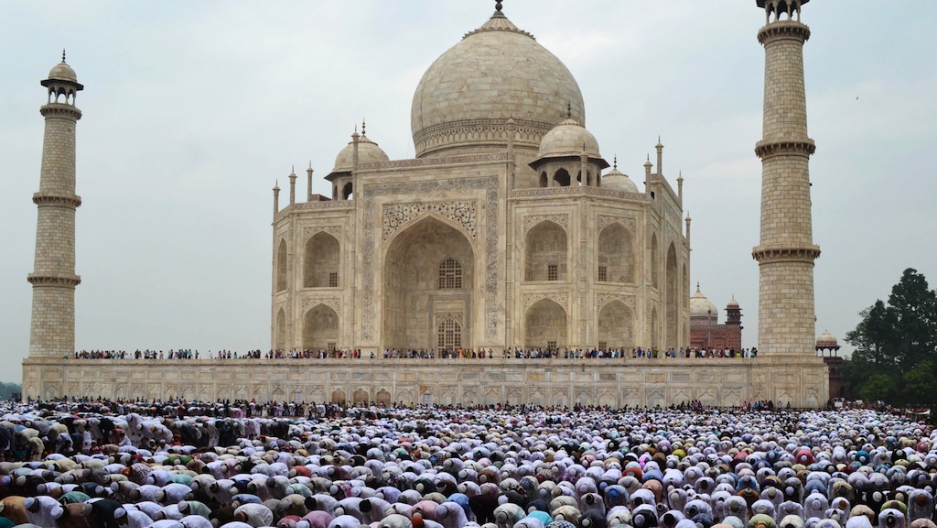 KARACHI, Pakistan — The main attraction at the Karachi Zoo isn't really an animal.

Sure, the zoo has most of the usual suspects — a lethargic black bear, a smattering of monkeys and glossy, giant Bengal tigers.

But the real show stealer is a hybrid creature called Mumtaz Mahal.

Locals say she's half-fox, half-woman, and for just $1 you can ask her any question your heart desires.

Her name may sound familiar: Mumtaz Mahal was the lovingly bestowed nickname for the wife of Mughal emperor Shah Jahan. After her death in 1631, Shah Jahan immortalized his love for his wife by placing her inside what is arguably the most romantic mausoleum in the world: the Taj Mahal.

Her only similarity with Karachi's Mumtaz Mahal, however, is the loosely Mughal-inspired structure, smack in the center of the zoo, in which she resides. The tiny attraction has become an institution; the zoo's manager, who goes by the single name of Quraishy, says it's been part of the zoo since "before Pakistan was even a country."

Wednesdays are designated "Ladies' Days" at the zoo, observed to protect women from sexual harassment, which is rampant in Pakistan. The segregation also allows women who'd like to take their children on an elephant ride to visit without their husbands (the zoo can get obscenely crowded during the weekends, when large families often visit together).

I picked a muggy Wednesday afternoon to investigate whether women actually use the opportunity to visit. There were in fact a lot of people; a zoo ranger told me that an average Wednesday gets approximately half the amount of visitors as a Saturday or Sunday. It's substantially more people than visit on other weekdays, when hardly anyone shows up, he said.

Ladies' Day or not, I hadn't expected to see a bridal party at the zoo. My interest was piqued by a woman dressed in full bridal wear surrounded by female family members, all of them decked out in wedding apparel and heavy make-up. They were standing in a long line of people snaking around the gaudy hexagonal room where Mumtaz Mahal sits.

Unfortunately, the bride and I didn't have a common language. But later, older Karachi residents I spoke to explained that Mumtaz Mahal can tell the future, and that her blessings bestow good fortune on young brides. It's probably because of this that the woman in line ahead of me wanted to walk in with just her sisters, asking politely that I wait until she was done before entering the room.

I didn't make a similar request, instead squeezing into Mumtaz Mahal’s small chambers with six other women. As soon as the drawstring curtain dividing us from the creature was pulled back, the women giggled and asked the fortune teller probing personal questions.

"How do you put on your make-up?" asked one woman, gesturing toward her limp paws. "I've just gotten very used to holding the brush with two feet," she explained. "Are you ever going to get married?" asked another. "I'm not sure, I have no parents," Mumtaz Mahal answered.

I'm not sure if their questions were genuine: the illusion wasn't impressive. Mumtaz Mahal was very obviously a man dressed up as a woman, crouching behind a mirrored table. The headscarf draped over his shoulders covered up the head of what smelled and looked like a very dead fox.

Before I could ask questions, the curtain closed. After the giggling women filed away, I asked the men guarding the structure who the man with the fox was. After dismissing my question several times — "What makes you think it isn't real?" — they finally conceded that the man behind the makeup is an aspiring thespian (as for the fox, it's anyone's guess as to where he came from).

But why not just hire a woman to play the role more convincingly? I asked. The men just looked at me, incredulous.

This is, after all, a country where a harassment-free day is designated for women to enjoy the zoo with their children. A lady as the main attraction at Ladies' Day? Now that would be truly incredible.