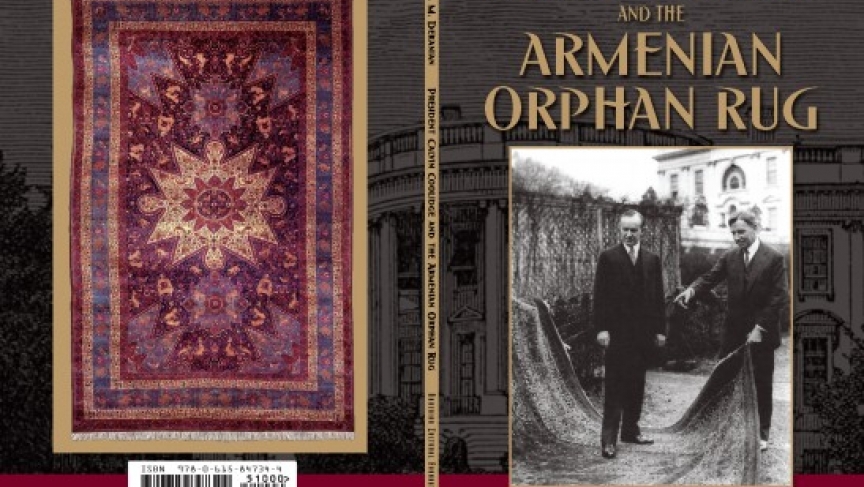 The cover of the book "President Calvin Coolidge and the Armenian Orphan Rug" by Hagop Martin Deranian.

Courtesy of the Armenian Cultural Foundation

Until a few weeks ago, Armenian advocates hoped a rug that has been in White House storage for almost 20 years would be put on display at an event at the Smithsonian in Washington, DC.

But hopes were dashed recently after the White House announced it would not lend the carpet at this time. The rug in question is not just any rug.

After the Armenian genocide, where between 1 million and 1.5 million Armenians were either killed or starved to death, many children were left orphans. The US government set up a campaign to help relocate these children and provide humanitarian relief.

In 1925, a group of these orphans who had been relocated to Ghazir, now in Lebanon, wove a rug, now known as the "orphan rug," and gave it as a gift to US President Calvin Coolidge.

Philip Kennicott, arts and architecture critic at the Washington Post, says the rug is so professionally woven it's hard to tell it was the work of children.

"It's a big rug. It's a beautiful piece. It has on it many images of animals and plants and there is the sense by people who know what these images suggest, that it represents probably the garden of Eden," he says.

Kennicott says the rug traveled with the Coolidge family after they left the White House. It stayed with them until the 1970s. In the 1980s, it arrived back at the White House, where it has been kept in storage.

Only a few people have seen the rug since it was put into storage. Among them, Kennicott says, is a woman who saw a picture of the rug in the White House and recognized it as the rug her mother had helped to weave.

In 1995, she asked for, and received, permission from the Clinton administration to see it. Current efforts to display the rug centered around a Dec. 16 event launching a book about the rug, "President Calvin Coolidge and the Armenian Orphan Rug" by Hagop Martin Deranian.

Because the "orphan rug" has its roots in the Armenian genocide, it is a politically-sensitive object to display, says Kennicott.

"The US government does not want to touch the word genocide. That's the perennial political debate that comes back again and again," he says. "It's a very delicate situation."

The White House issued a statement about the planned Smithsonian event, which said, "The Ghazir rug is a reminder of the close relationship between the peoples of Armenia and the United States. We regret that it is not possible to loan it out at this time."