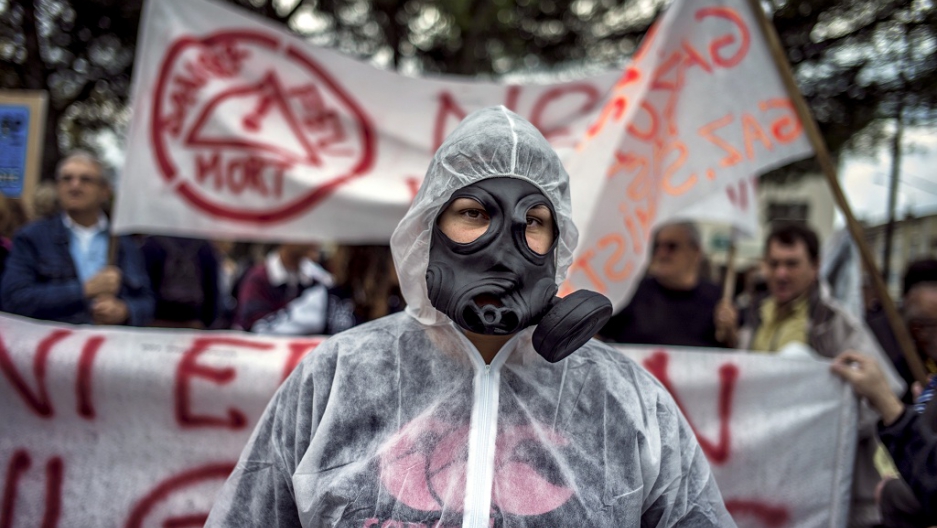 People demonstrate in streets of Montelimar, southern France, on October 19, 2013, to protest against the exploitation of shale gas and oil. Extracting shale oil and gas reserves through controversial 'fracking' will in future require an environmental impact study, European lawmakers agreed on October 9, 2013, despite opposition this will add to costs and hurt jobs.
Credit: Jeff Pachoud
Share

Individuals within the Anonymous hacker collective are joining Canadian protesters in a struggle against fracking in New Brunswick that has seen growing violence in recent days.

A large portion of the protesters are members of Canada’s indigenous First Nations. They say their drinking water and land are being contaminated by the development of natural gas reserves through hydraulic fracturing, also known as fracking.

According to activists and journalists, last week a heavily armed police officer shouted, "Crown land belongs to the government, not to f*cking natives” at protesters who were barricading access to an exploration site.

On Friday, Anonymous members with OpFrackOff announced their campaign to identify the officer who allegedly made the comment, among others.

Demonstrations, which had been going on for over weeks in the area, only intensified after a judge lifted an injunction ordering protesters to dismantle their blockade outside of a compound owned by SWN Resources Canada, a subsidiary of the energy firm conducting the shale gas exploration project in New Brunswick.

OpFrackOff in Elsipogtog from YAN Investigates on Vimeo.

“The people demand a direct say over whether or not their water is poisoned,” said one Anon involved with OpFrackOff, demanding the Canadian government “call off the paramilitary thugs.”

According to an RCMP representative contacted by GlobalPost, the police, not military, officers present at the protest were members of emergency response teams facing "extremely high risk." The representative confirmed the presence of private security firm employees in the area, but stated that those individuals left the area shortly after receiving death threats.

"We were informed of firearms at the protest camp, hundreds of rounds of ammunition and even improvised explosive devices. The situation was extremely dangerous," said Cst. Jullie Rogers-Marsh, an officer from the New Brunswick division of the RCMP.

Rogers-Marsh noted that as a safety precaution the uniforms of emergency response teams bear no police insignias or identification. She added that there were two occasions on which police officers fired SOC rounds — non-lethal rounds that resemble bean bags — on protesters, none of whom were seriously injured.

New Brunswick premier David Alward has also come under fire following an election campaign in which he championed the public’s right to decide what happens to the land. According to the Canadian Press, Alward changed his tune after election, dismissing calls for a referendum on fracking. A vote isn't needed because his party's election platform clearly stated its support of the responsible and safe development of the natural gas sector, Alward argued.

“ALL of New Brunswick wants a referendum, that's why they elected this premier,” said Heather Marsh, a human rights and internet activist involved with the protests.

Marsh and the Anons involved in OpFrackOff suspect powerful business interests are behind the government crackdown on fracking opponents.

Anonymous is hoping to expose the individuals behind the project.

“Our goal is to map the relationships among all these people and their business interests — to follow the money,” read a press release issued by the Anons involved in the operation. “Anonymous calls for a referendum on fracking exploration to determine the will of the people. Until that time, Mr. Alward, put your paramilitary thugs back on desk duty.”

“The overall goal [of OpFrackOff] is to remove the corporate boxes and see who is behind everything and what else they are involved in,” Marsh said.

According to reports by the Halifax Media Co-Op, SWN Resources, the Texas energy company undertaking the shale gas exploration project in New Brunswick, is working with the Irving family — a powerful New Brunswick family that has earned much of their fortune in oil and gas ventures.

"These operations are being conducted in accordance with our license to explore granted by the [province] and with all local laws and regulations," SWN Resources said in a statement sent to GlobalPost.

"We respect the right of all citizens to voice their beliefs and opinions, when conducted in a safe and lawful manner," the statement added.