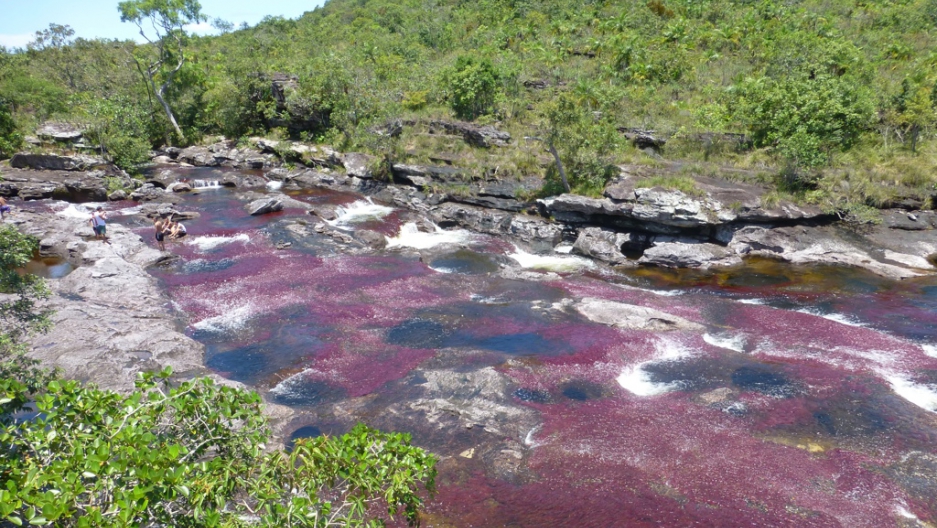 LA MACARENA, Colombia — On his way to work one recent morning, Cesar Zarate, the director of La Macarena National Park in southern Colombia, opted for the so-called guerrilla highway.

Bumping along in a pickup, Zarate admitted that he’s of two minds about the rutted, 82-mile gravel track. Built a decade ago by Marxist rebels with the help of stolen bulldozers and backhoes, the road cuts through the middle of the park that Zarate oversees.

On the one hand, the road is an undeniable convenience in an impoverished, isolated, and mostly road-less region.

Yet Zarate points out the route makes it easier for illegal settlers, loggers and ranchers to exploit the delicate ecosystem, and stands as a blatant symbol of the rebels’ longtime dominance here.

La Macarena isn’t the only nature preserve in this embattled South American country where guerrillas come and go at will. Among Colombia's 57 national parks, 23 are home to rebels or criminal gangs, 25 contain buried land mines, and 15 are so dangerous that park rangers have trouble accessing them, according to park and law enforcement officials.

Over the years, about 40 park officials have been killed in the line of duty. They include Marta Hernandez, the director of Tayrona National Park on the Caribbean coast who was murdered by paramilitaries in 2004 when she objected to their use of the territory to smuggle drugs.

“These parks are so remote and access is so difficult that these illegal groups take advantage of them,” said Gen. Carlos Rojas, commander of a sprawling Colombian army base near the town of La Macarena.

Part of the problem is that Colombia’s half-century-old conflict began long before many areas of the country were designated as national parks. By the time Colombia’s environmental movement gained force in the 1980s, many of these regions were already occupied by leftist rebels or right-wing paramilitaries.

La Macarena National Park is located in the Macarena massif, a 100-mile-long ridge that mysteriously juts 7,500 feet above the jungle and predates the Andes Mountains by millions of years.

Though largely unpopulated, the region has been teeming with rebels since the early 1950s, a decade before Colombia’s full-scale war broke out.

Insurgents have also used the parks to grow coca and opium, the raw materials for cocaine and heroin, respectively.

Police crop dusters that target drug plants in the rest of the nation cannot fumigate in the parks because of their status as protected areas. Instead, the government sends in machete-wielding field hands to uproot coca by hand, a process that’s far slower and more dangerous.

Not surprising, fearful tourists shy away from most of Colombia’s national parks, opting instead for safer destinations like the resort city of Cartagena or the Caribbean beaches of Santa Marta.

Yet at the same time, Colombia is winning international acclaim for its commitment to protecting the nation’s flora and fauna through its extensive national park system.

In August, President Juan Manuel Santos doubled the size of the Chiribiquete National Park, which now makes it one of the Amazon basin's largest protected areas — bigger than Vermont and nearly the size of Belgium. The expansion will prevent multinational oil and mining companies from exploiting these lands.

(The YouTube video of Chiribiquete park below was produced by Colombia's national parks department.)

“The Amazon gives us both oxygen and water and nothing can be more important than that,” said Santos, whose government is receiving $50 million from Norway for this conservation effort.

Still, Chiribiquete is another example of a park the government has been unable to control.

Three decades ago, drug kingpin Pablo Escobar’s Medellin Cartel chose this remote region to build Tranquilandia, an infamous cocaine factory that consisted of 19 laboratories and eight airstrips used to ferry in precursor chemicals and fly out the finished narcotic. When Colombian police and DEA agents raided Tranquilandia in 1984, they found 13 metric tons of cocaine.

Located in southern Guaviare and Caqueta departments, Chiribiquete is so remote that it took Oliver Schmieg, a German photographer, three days motoring up jungle rivers to reach the park. Along the way, he encountered members of the Revolutionary Armed Forces of Colombia, the country’s largest rebel group known as the FARC, but no park rangers or government troops.

But Schmieg also saw pink river dolphins, flocks of macaws, herds of wild pigs and families of monkeys. He described the trip as one of the most fascinating of his life. “It is a totally virgin area,” he said.

Ironically, Colombia’s conflict has in some cases helped to protect the parks by discouraging predators. Settlers who had been chopping down the rain forest in Los Katios National Park, located in the Darien jungle on the Panamanian border, fled in the late 1990s when the area became a battle zone for guerrillas and paramilitaries.

“Although it sounds cynical, the war has allowed many ecosystems to remain intact,” Frederic Masse, a professor at Bogota’s Externado University, told the newsweekly Semana.

Zarate said the FARC’s presence in the parks has been a mixed blessing. In some areas, the rebels for strategic reasons discourage outsiders from moving into the parks. But in other cases, the guerrillas have promoted logging, gold mining, cattle ranching and drug cultivation, and take a cut of the profits to help fund their war.

The FARC is now engaged in peace talks with Colombian government negotiators in Cuba. But if the two sides reach a final accord, Zarate said that park officials will face new challenges as these regions open up for tourism.

That’s been the case at Caño Cristales, a series of gorgeous mountain streams on the edge of La Macarena park that cascade over purple, red and yellow aquatic plants, turning the rivers into liquid rainbows. Due to a heavy army presence, Caño Cristales is one of the few areas of the park that’s safe for tourism and visitors have been flocking here over the past two years.

In fact, they arrive via the guerrilla highway that runs right past Caño Cristales. Now, Zarate fears that thousands of swimmers, swathed in No. 50 sunblock, will contaminate the water and destroy the delicate aquatic plants.

But tourists who have discovered the area are delighted they can finally visit former red zones that had long been off-limits.

“It’s like a family jewel that has been lost for decades, and finally one day you find it,” Bogota business consultant Juan Gonzalo Vallejo said, following a blissful afternoon swimming at Caño Cristales with his family. “Now it’s time to enjoy that jewel.”

More from GlobalPost: Colombia's FARC may soon be on the ballot