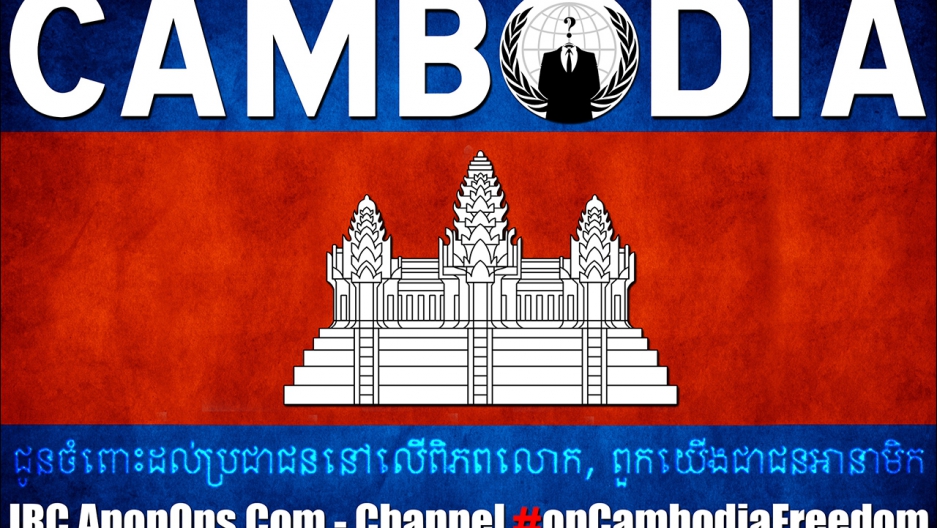 As thousands of protesters filled the streets of Phnom Penh for a third day Friday to demand a United Nations investigation into strongman Prime Minister Hun Sen's re-election, individuals within the Anonymous hacker collective remained at their computers to unearth the Southeast Asian government's secrets.

Supporters of the opposition Cambodia National Rescue Party suspect fraud behind the July re-election of Hun Sen, who has been at the helm of Cambodian government since 1985. They also assert that election officials inflated the number of parliamentary seats due to members of the ruling Cambodian People’s Party after the votes were tallied.

OpCambodiaFreedom is on their side.

“All politicians are rats. They’re animals. Our goal is to leak more government data and send a message to our dictators that we are not simply sitting and watching,” one of the hackers involved with OpCambodiaFreedom told GlobalPost.

OpCambodiaFreedom, launched in June, has so far sought to reveal corrupt election practices. In their seminal hack in July, participants in the operation hacked into servers used by the Cambodian National Election Committee (NEC), just 10 days ahead of a nationwide vote. Claiming that the NEC planned to facilitate voter fraud, the hackers, known as Anons, temporarily disabled the website, defaced it and made off with large amounts of data.

The NEC, which has faced frequent accusations of fraud in past years, has promised to look into local complaints, and has admitted some irregularities in the polling process.

But participants in OpCambodiaFreedom are more concerned with systemic problems that plague Cambodian society, including severe poverty, censorship, corruption and government land grabs.

For years, military police and other authorities have been using violence and intimidation to carry out land grabbing operations, according to numerous reports.

Land expropriation and further human rights abuses have attracted international attention in recent years. In a report released earlier this month, aid organization Oxfam International alleged that a Cambodian plantation whose sugar ends up in Coca-Cola and Pepsi products has robbed 457 families of their farmland — their primary source of income.

OpCambodiaFreedom, which is currently targeting more government computer systems, is unusual in its long-term commitment to the cause. Anons involved have abandoned the cavalier bravado typical of Anonymous operations, instead expressing their determination to take on the government on behalf of the Cambodian people.

In a country with limited internet penetration, like Cambodia, there are few domestic spectators to an online hack. But a combination of poor information security and government secrecy creates an environment that empowers skilled hackers and grants them access to large amounts of privileged information.

“We would not say it is easy or difficult [to break into government systems]. But with determination, courage and the ideals that we believe in, we will prevail. We also call for support from citizens of the world to join us in this operation. We need all the help we can get to bring real justice to the citizens of Cambodia,” said one Anon involved with the operation.

As an Anonymous operation with a small but dedicated following, OpCambodiaFreedom is hoping to attract the gaze of outsiders and Anons alike as protesters continue demonstrations in the capital.

"Global Anons supported this op at its inception but you may know they also have to take care of the bigger ops as well. So as for this op, we are trying to make the words heard and reach out to all anon and everyone on Earth who care about freedom, censorship and justice," one Anon said.

“We work for freedom of people and freedom of knowledge and information. Our leaks are everywhere.”