This is the novel that gave slavery a bad name. 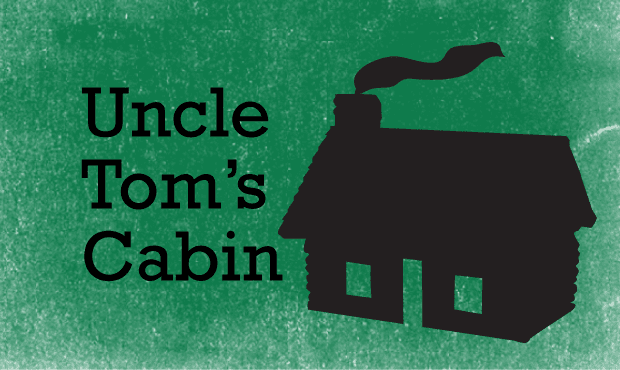 Harriet Beecher Stowe wroteUncle Tom's Cabinto promote the abolitionist cause, basing some of her novel on the testimony of an escaped slave. Her central character was a man of dignity, a good Christian, who suffered the abuses of slavery nobly and died protecting others. So how did Uncle Tom become the byword for a race traitor --- a "shuffling, kowtowing, sniveling coward"? A scholar traces Tom's unfortunate journey through pop culture, and a controversial writer who's been called an Uncle Tom decides to own it: "He was a transformative figure for the people around him. He was very powerful, even though he seemingly had no power."

Excerpts from Harriet Beecher Stowe's Uncle Tom's Cabin used in this story are from the Blackstone Audio and Trout Lake Media audiobooks.

Special thanks to Carver Clark Gayton and Adena Spingarn who each took time from their own research on Uncle Tom's Cabin to contribute to this piece. 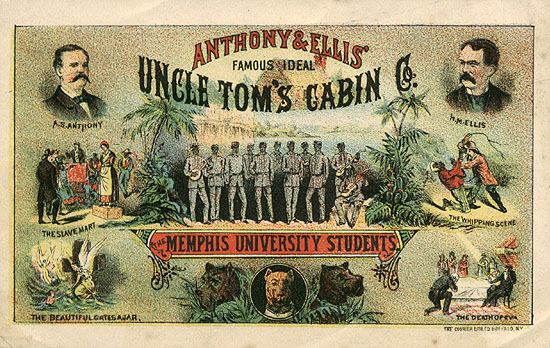 A promotional card from the 1880s advertises the most dramatic moments in a theatrical version ofUncle Tom's Cabin. The character of Tom is portrayed as feeble and elderly and the content of the novel is sensationalized to draw in an audience.
(Courtesy Uncle Tom's Cabin & American Culture: A Multi-Media Archive and Michael Tedesco) 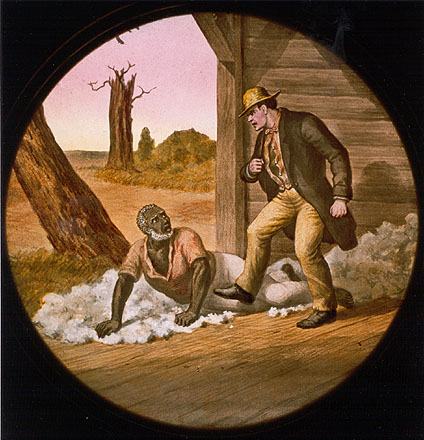 Legree threatens Tom as he is about to order Tom's fatal beating, depicted in this scene on a colored glass lantern plate. Magic lantern shows --- where images were projected from glass slides in a theater --- became increasingly popular to share Uncle Tom's story outside of a traditional stage play. This lantern slide dates from 1881 and is no. 11 in a set of 12. These slides were widely reproduced, some for at home use, and frequently mirrored the original illustrations in the novel drawn by Hammatt Billings.
(Courtesy of The American Magic Lantern Theater) 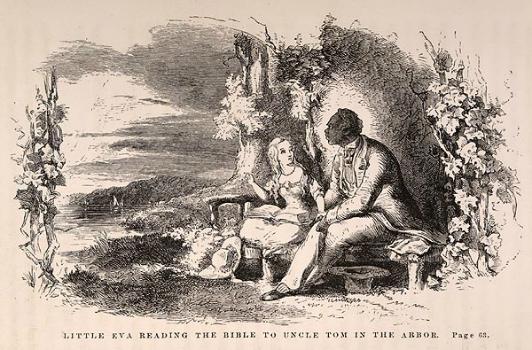 Uncle Tom sits next to Eva, the child he cares for and tends as she falls ill in Harriet Beecher Stowe's novel. This illustration by Hammatt Billings appears in the first edition ofUncle Tom's Cabin. Here Tom is portrayed as a younger man of healthy stature.
(Courtesy Uncle Tom's Cabin & American Culture: A Multi-Media Archive (public domain)) 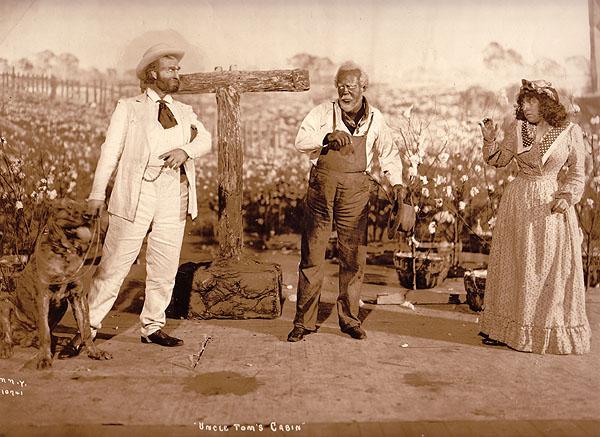 A photograph of an early 1900s theatrical production ofUncle Tom's Cabin. The sets were very lavish for the era, and the stills were shot to give a heightened sense of drama to the performance. From left to right we see the characters of Simon Legree, Tom and Emmeline. By this time we can see Tom has transformed into an old, feeble character that is at odds with the courage he displayed in Beecher Stowe's novel. Legree publicly degraded Tom and Emmeline at an auction before deciding to purchase them both. Emmeline is one of two women whom Tom later helps escape --- which he pays for with his life.
(Courtesy of The Ohio State University Libraries and the Jerome Lawrence and
Robert E. Lee Theatre Research Institute) 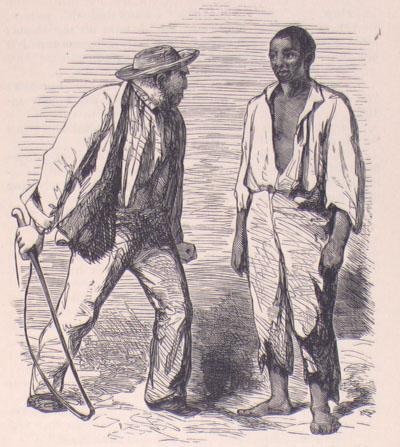 This illustration comes from an 1853 British edition ofUncle Tom's Cabin. This edition was reprinted in the United States in 1888 and shows Tom as a young man standing up to his final master, the slave trader Simon Legree. Tom refused Legree's order to flog another slave, and later defies Legree again, refusing to tell him how to find two runaway slaves. This strong, resilient image of Tom is at odds with how the character came to be perceived.
(Courtesy Uncle Tom's Cabin & American Culture: A Multi-Media Archive & Clifton Walter Barrett Collection, University of Virginia (public domain)) 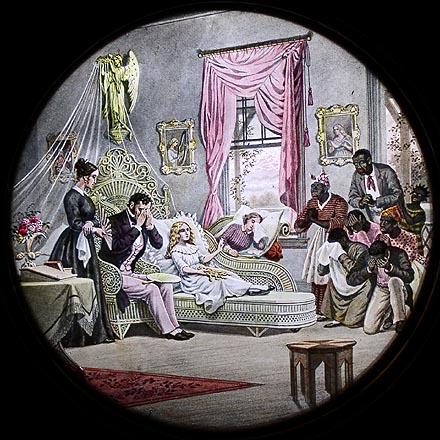 This scene depicts Eva, the child Tom cares for, dying from tuberculosis. This scene also appears on a glass plate from a magic lantern show, and dates from the 1880s.This slide in particular is a departure from the novel's original illustrations and shows the slaves in a more stereotypical fashion --- perhaps in response to the Uncle Tom theater shows that increased in popularity through the 1870s.
(Courtesy of The American Magic Lantern Theater) 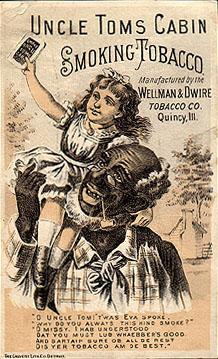 By 1900, Uncle Tom had become a recognizable figure in popular culture. His image appeared in advertising campaigns and became increasingly stereotyped. Here he appears in an ad for tobacco. His character lacks the gravity he displays in the novel, and instead appears as a simple buffoon.
(Courtesy Uncle Tom's Cabin & American Culture: A Multi-Media Archive) 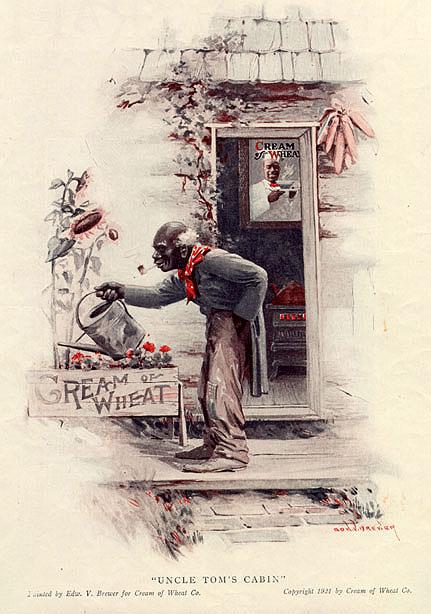