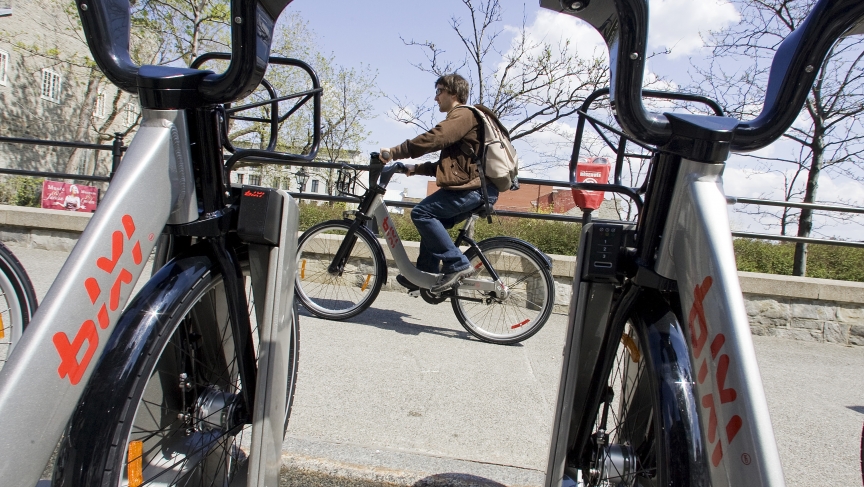 Francis Tremblay of Montreal rides a BIXI (combination of bike and taxi) bicycle in Old Montreal. Incarnations of BIXI, a new public bike-rental system, have been exported to places like Boston (Hubway) and New York (CitiBike).

Here's a question: Do the two languages of Montreal — French and English — help or hurt innovation in the city?

We put the question to McGill University's Professor of Urban and Regional Development Richard Shearmur. His answer might surprise you.

He says that, in the short term, many people would say the dual languages are an impediment. There are a lot of arguments between the Francophones and the Anglophones about which language should dominate. It also makes it hard at times to attract a global workforce.

It creates a tension. You have the presence of two major European cultures at loggerheads.

But that tension might be the key to Montreal's economic creativity.

Shearmur says it's certainly constructive. People in the city cannot be complacent. They are always confronted with a different point of view. Just go to a bar like Dieu du Ciel and you can hear the debates about both the languages and the different social values associated with a more French or a more English approach.

And this tension, a tension you really can't escape, works its way into the city's cultural and social innovation.

Just take the music scene. Arcade Fire led the way with an innovative sound. And now, Grimes took that torch and pushed it one level ahead. And when you listen to interviews with the musicians, you hear them talk about the dual culture contributing to their creativity.

But it’s more than pop.

Montreal serves as a meeting place for the English and the French views of the world. That's quite particular to Montreal.

So while it might be a challenge to a visitor ordering a bagel at St. Viateur, the dual languages of the city help keep it fresh and innovative, while other cities implode.