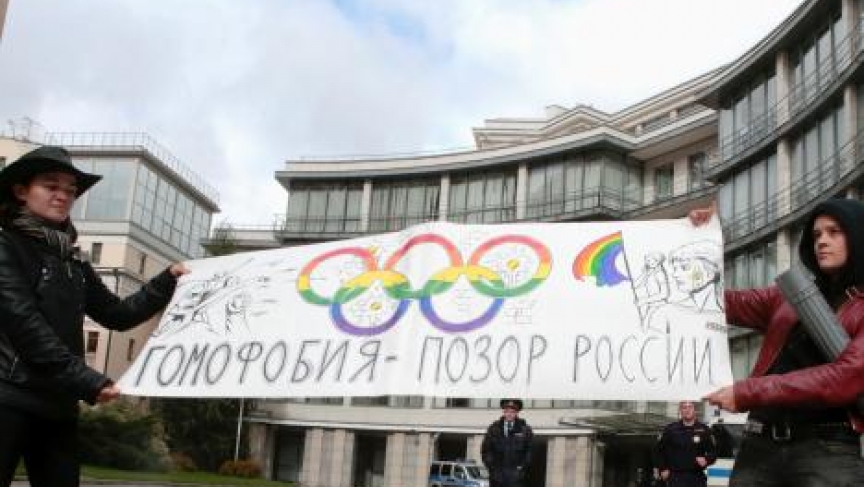 Gay rights activists in Moscow hold a banner protesting a ban on gay pride parades during the Sochi 2014 Winter Olympics.

In the eyes of gay rights activists, Coke needs to think seriously about the Winter Olympics in Sochi, Russia, now just three months away.

In response to the law, a gay rights organization, All Out, has organized an online petition to put pressure on Olympic sponsors, especially Coca Cola.

All Out's directer, Andre Banks, says the petition asks Olympic sponsors to "speak out against the Russian anti-gay propaganda law and call for its repeal before the Olympics, donate funds to Russian human rights defenders, and ask the Olympic Committee to change the rules, so future Olympics can only happen in countries that fully respect equality."

More than 25,000 people have signed the petition in the last several days.

Coke earlier posted this statement about its participation in Sochi: "We have long been a strong supporter of the LGBT community and have advocated for inclusion and diversity through both our policies and practice. We do not condone human rights abuses, intolerance, or discrimination of any kind anywhere in the world.

"As a sponsor since 1928, we believe the Olympic Games are a force for good that unite people through a common interest in sports, and we have seen firsthand the positive impact and long-lasting legacy they leave on every community that has been a host."

Russia's treatment of gays has sparked other reactions from LGBT activists, with some calling for a boycott of the 2014 Sochi Winter Olympics, while others have organized a boycott of Russian vodka.