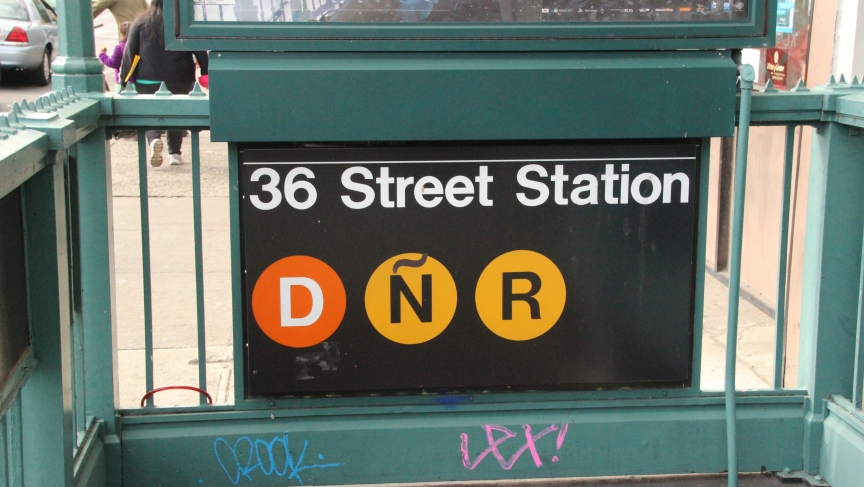 A tilde added to the sign for the N subway line in Sunset Park, a heavily Hispanic neighborhood in Brooklyn, New York.

New York City’s subway lines sometimes take on cultural meaning, maybe even pop­-cultural meaning. Duke Ellington made taking the A train famous. Rap icon Jay-Z’s name gives the parallel J and Z lines more cred (although his moniker is probably not a reference to them). The L line has become synonymous with the hipsters it ferries into Brooklyn. Listen to the audio:

Now the city’s N line is giving winking acknowledgement to Spanish-speaking culture. A few days ago, a number of its signs sprouted tildes — the curving accent mark that turns the N into the Spanish letter “Enye”.

The N line begins — or ends, depending on your perspective — by the water at Coney Island, way south in Brooklyn. 30 stops and an hour later, it ends (or begins) in the Queens neighborhood of Astoria.

The enye fairies, who sprinkled tildes on the yellow-and-black N-line signs at various stops, apparently didn’t make it out this far. The amended signs are concentrated toward the middle of the line, as it runs through midtown and downtown Manhattan and central Brooklyn. These are busy stops, though, and not many people there seemed to have time to take notice.

The enyes are the work of Z Street Art, a project that’s throwing up new pieces of art in public places each day for six months. The enyes, which went up Saturday, are their first strike. The group explained on its Tumblr page, “The N-line is now the Ñ-line for the 24.28% Spanish speakers in New York City.”

Down at the N stop in Sunset Park, Brooklyn, a neighborhood that’s nearly half Hispanic, some commuters were intrigued.

“That’s crazy man, I don’t even know what that means,” said Deshaun Sumpter.

I told him the rationale for the tilde — how it was a recognition of the city’s Spanish speakers.

“Oh, okay,” he said, laughing. “I got Spanish friends, you know what I’m saying? I give props to them, you know? We’re all American people, we all gotta give props to each other.”

A couple of riders had ideas about other lines with possible Spanish implications. One guy suggested the L line could be re-spelled “El” to make the Spanish article “the.” Another worried about the possible confusion of a rolled R in the R Line.

A few Spanish-speaking school kids who walked by said they thought it was cool that their language was getting some recognition.

Claudia Lechuga (“‘Lechuga,’ which actually means ‘lettuce’ in Spanish,” she explained) lives right by the Sunset Park N stop, and she’s into the enye.

“I love it!” she enthused. “I think it’s really great. It’s so cute. It’s kind of a nice homage to what the neighborhood has been, historically.”

The enyes found a fan in Blanca Gonzalez, too. She’s originally from Mexico, and runs an employment agency nearby, where the clientele is largely Hispanic. She likes the message, although she’s a bit worried about the delivery.

“It’s like two sides of the story,” she said. “First of all, I think it’s not good to be doing graffitis. But on the other side, they want to be heard, you know what I’m saying? There has to be a message that they want to send saying, ‘Yes we exist in here and we need to be represented and you can’t just deny we’re here, so listen to us.’”

John Lee works around the corner in this neighborhood, which is also home to a big Asian community. Like a good New Yorker, he’s skeptical. “People don’t pay attention, they’re too busy in their own world, right?”