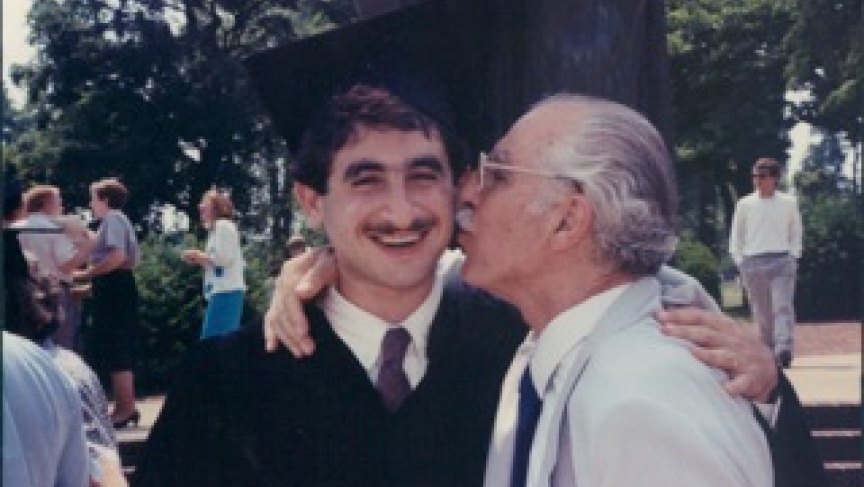 Karim Shamsi-Basha, who moved from Syria to attend the University of Tennessee in the 1980s, stands with his father, Kheridean Shamsi-Basha.

First Days is a project inspired by Philadelphia’s South Asian American Digital Archive, which collects stories from immigrants about their first days in America.

My name is Karim Shamsi-Basha. I am a photojournalist and a writer. I grew up in Damascus, Syria.

In school, I would watch the government officials’ kids get A's for not even showing up. I would stand in the bread line for an hour, and the official's driver would just walk straight in, get the bread, and walk straight out. Just unfairness, injustice, you know. It may not be a huge deal to some people, but it was to me.

My dad was a poet and a writer, and he encouraged me to leave when I was 18. The University of Tennessee accepted me, so I came to Knoxville. It was a very easy decision to make because I knew that they had one thing here that we didn’t, which was freedom. And I wanted that really, really bad.

Knoxville was very aired out, very spacious, front yards, backyards. We don't have that in Damascus. In Damascus, you smell the meat being cooked, you smell jasmine on the sidewalk, you smell herbs and spices. Here, it was less smelly. Here, people are more private, so they don't advertise what they have via smell, or via anything else, really.

So when I first came, the guy I lived with said, “Where you from?”

I didn’t know what to say, so I just brushed it off.

Later on, I went down to the lobby, the guy at the check-out, he says, “Where you from?”

I thought, “What is with these people?” And he said, “No, no, like from the Bible, the Road to Damascus!”

So, I go to look up the Road to Damascus in the Bible. And after I understood what they were asking about, and I understood it was in the Bible, I thought, they’re associating me with something that is very dear to your heart. I like that.

Karim Shamsi-Basha moved to the United States from Syria in 1986. He now lives in Birmingham, Alabama. He's the author of "Paul and Me: A Journey to and From the Damascus Road, From Islam to Christ." Read more First Days stories.