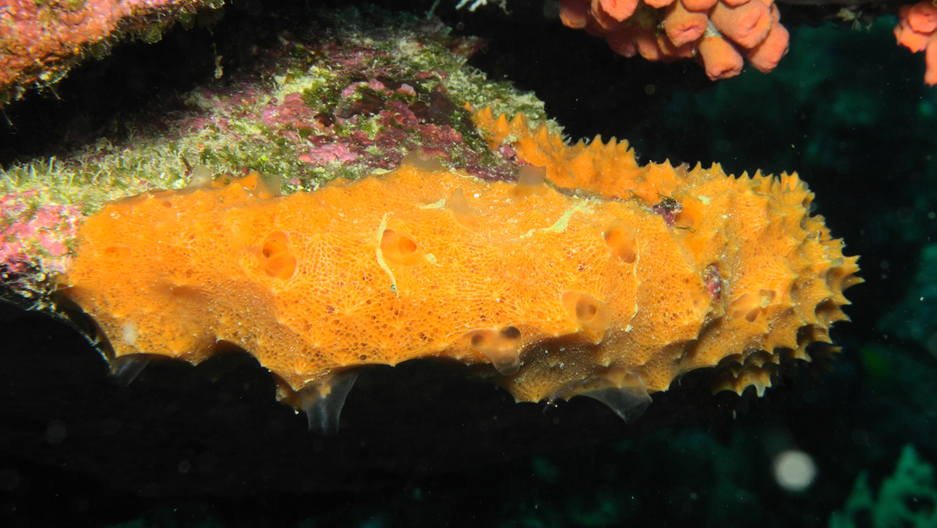 The Scopalina ruetzleri is one of thousands of different species of sponges.

Scientists have long marveled at the diversity of life found on coral reefs.

The clarity of the blue tropical waters means they are lacking in nutrients, yet the reefs are the rainforests of the ocean, teeming with fish and coral. Now, research from the University of Amsterdam in the Netherlands has found that a mostly ignored reef-dweller is playing a crucial role in feeding the other species that live there.

Jasper de Goeij says the humble sponge is the simple answer to a fundamental question that has puzzled scientists for centuries — as far back as Charles Darwin in the 1800s.

"A coral reef is sort of an oasis in the desert," de Goeij says. "Now we already knew that old energy and food that is on the reef is recycled constantly, but we didn’t know who did that and how that was done, and, basically, what we discovered is that sponges are sort of the key."

How are sponges able to make nutrients available to all the other creatures in the coral reef? It's actually not all that different from how it works on land. The plants on the reef use energy from the sun, just like plants on land, de Goeij says. Some of that energy is passed into the water as dissolved organic substances. That's where sponges come in.

The reefs are so small, the sponges are stuck at a certain size — meaning all that energy they're absorbing doesn't help them get bigger. Instead sponges use the dissolved organic substances to stay young.

"They make new cells, and old cells are shed into the water, and basically these old cells, or the detritus, is raining down on the reef and that is actually a nice food for other organisms," de Goeij says.

He calls the process the 'sponge loop.' Every bit of energy that is available is recycled through sponges.

Sponges are an ancient organism, and while they're an integral part of the coral reefs, they're not threatened by global warming in the same way that coral are. They might even thrive.

"There [are] actually some people that believe that, slowly, most of the coral reefs, if we don’t do anything, will change into sponge reefs," de Goeij says. "I actually, recently, found a lot of sponges, in the Amsterdam canals. ... Those are not the cleanest places."