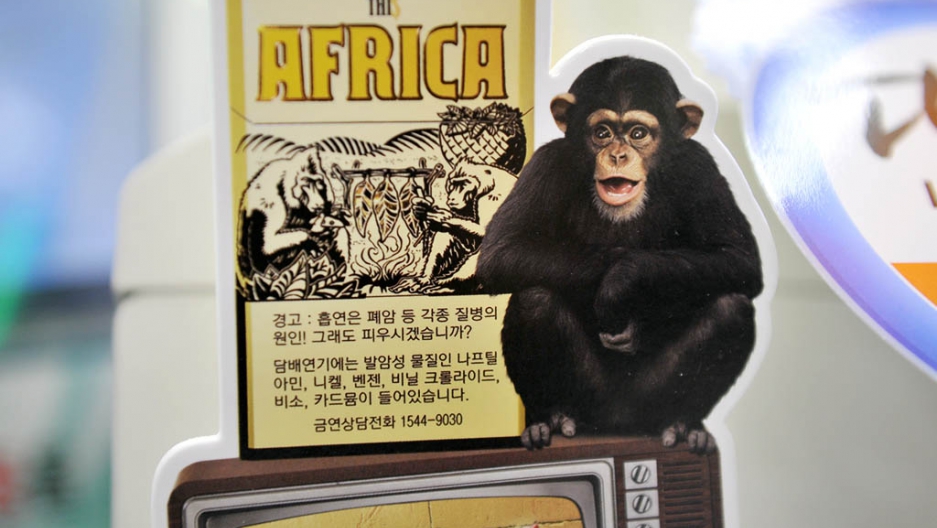 A panel advertises "This Africa" cigarettes at a convenience store in Seoul on October 23, 2013. South Korea's top tobacco firm KT&G said on October 23 it would pull ads for This Africa after complaints that images of apes was racist.
Credit: JUNG YEON-JE
Share

South Korea’s largest tobacco firm, KT&G, agreed on Wednesday to pull a controversial advertising campaign for its This Africa cigarettes that used monkeys in promotional materials.

The company will not change the name or packaging photo, however, the Korea Times reported.

“The negative reactions were totally unexpected as nobody raised the racism issue during the design process,” a KT&G representative told the Times.

“To calm controversy, caused by the company’s unintended message, KT&G is making a new advertisement.”

"We absolutely had no intention to offend anyone and only chose monkeys because they are delightful animals that remind people of Africa," the KT&G representative told AFP.

Slogans on the cigarette packages say tobacco is roasted in the “traditional” African style, according to BBC.

“We are deeply offended by KT&G’s shameless and insulting use of this mocking imagery,” the African Tobacco Control Alliance said in a release, AFP reported.

“Mocking Africa to sell a product that causes death and disease is unacceptable, and we will not stand for the exploitation of Africa by tobacco companies.”

According to the Korea Times, another popular brand in that country recently faced similar backlash.