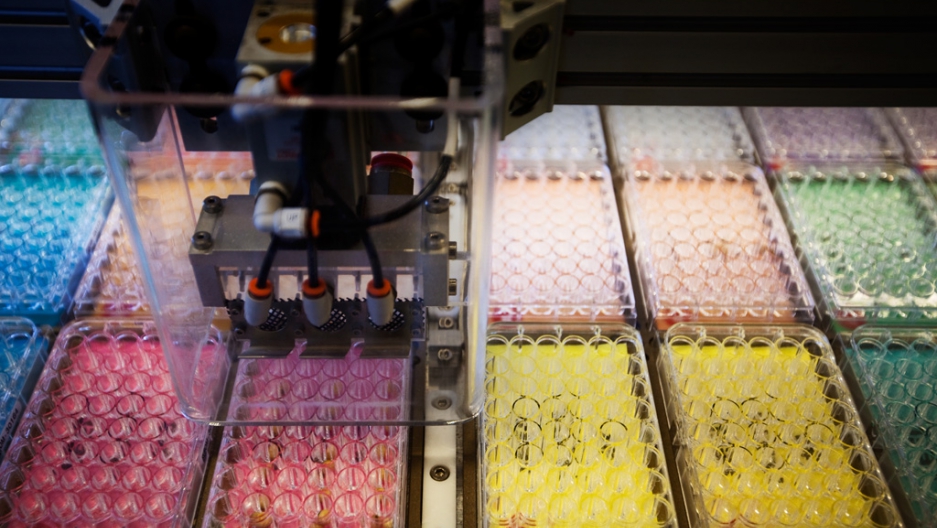 Images of advanced seed chipping machines inside Monsanto agribusiness headquarters in St Louis, Missouri. These machines are designed and built in-house and they allow the technicians to chip off tiny portions of seeds, which are scanned instantly for the perfect DNA of an elite corn seed.
Credit: Brent Stirton
Share

DES MOINES, Iowa — This year’s World Food Prize went to three biotech engineers, all of whom have been instrumental in bringing genetically modified foods to your table.

Inside the Marriott Hotel in downtown Des Moines, Iowa, where the prize’s four-day program took place October 15-18, the message was clear: Technology is the answer to the world’s looming food shortages, and anyone who gets in the way isn’t putting farmers and the hungry first.

And you have to admire the laureates for their candor.

In their prepared press statements, they couldn’t have been clearer about what the prize means to them.

“The committee’s decision to award the World Food Prize to biotechnology researchers,” said Mary-Dell Chilton of Syngenta in a press release, “will help convey to consumers the value, utility and safety of genetically modified crops.”

“I hope that this recognition will pave the way for Europe to embrace the benefits of this technology, an essential condition for global acceptance of transgenic plants,” said Montagu.

Fraley was less direct but equally unambiguous. “The World Food Prize provides us an important platform to engage in a new global dialogue,” he said.

Hightower called it the “upchuck rebellion” by the “good food” movement against corporate agriculture.

On questions of public health and the environment, the debate is still open. But evidence is mounting, both of public health concerns (see the recent open letter from scientists) and environmental impacts, such as the rise of “super weeds” resistant to herbicides. So too on the persistent failure of GM crops to increase yields.

Jim Hightower struck a chord with his call to resist monopoly control of agriculture. The World Food Prize committee received a citizen petition of more than 340,000 people protesting the biotech awards.

At the prize ceremony, an elaborate invitation-only affair in the Iowa Capitol building, Fraley accepted the prize “on behalf of all his colleagues at Monsanto,” a company that underwrites the World Food Prize Foundation. He said GM crops were needed as we face the challenge “to double food production” to feed a growing population.

As my recent report shows, such alarmist calls have no empirical basis. The UN Food and Agricultural Organization projects a manageable demand increase of 60 percent by 2050. And we can start by cutting the loss and waste of food from its current level of 30 percent, and the 13 percent of cereals projected to go toward producing biofuels instead of food.

But the warnings sure boost sales, and feed the panic that biotech companies hope will spur us to embrace their controversial technologies.

Outside of the Iowa Capitol building, a small group of protesters denounced the selection of biotech scientists for the food prize. Among them were three farmers, two from Haiti and one from Brazil. Two days earlier, they had been in New York to receive the Food Sovereignty Prize, a grassroots alternative to the increasingly corporate World Food Prize, created by the US Food Sovereignty Alliance in 2009.

In Haiti, the protests are larger and the stakes are higher. After the catastrophic Port au Prince earthquake in 2010, 10,000 Haitian farmers marched to reject a $4 million donation of seeds from Monsanto, arguing that the company was trying to hook peasants on seeds they couldn’t share or replant. In a dramatic show of defiance in the face of widespread hunger, the farmers publicly burned the seeds.

They argued that people have the right to food and the right to choose where their food comes from and what’s in it. This call to “democratize the food system” got no hearing at the World Food Prize.

“We need to make sure everyone benefits from this technology,” said a closing speaker, “the companies, the scientists, the poor who are hungry….”

Who came first on that list, and who came last, was lost on most of the crowd.

Timothy A. Wise is the Policy Research Director at Tufts University’s Global Development and Environment Institute (GDAE). He is currently on an Open Society Institute Fellowship on agriculture, climate change, and the right to food.