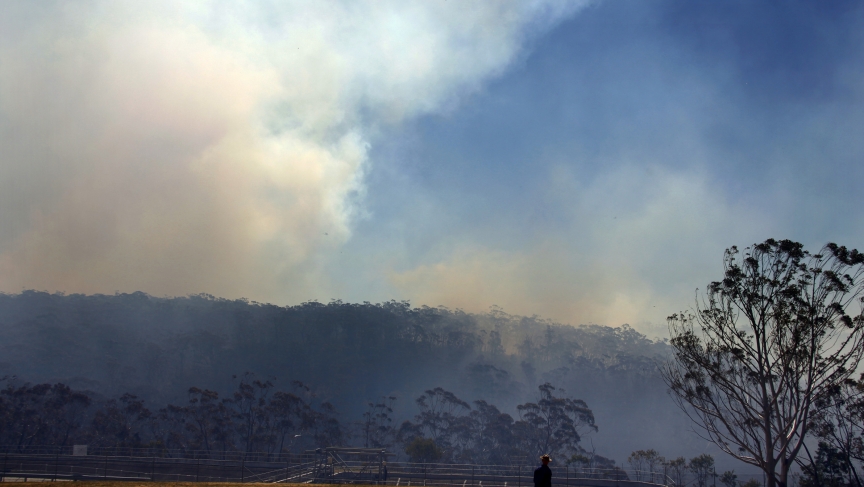 A resident walks across a field to take a closer look at a fire approaching homes near the Blue Mountains suburb of Blackheath, located around 43 miles west of Sydney, October 23, 2013. A state of emergency has been declared in New South Wales, as bushfires continue to burn west of Sydney and weather conditions are expected to worsen over the coming days.

Roughly 60 blazes are still raging near Sydney, Australia, as the region enters its second week of intense wildfires.

Police say some of the fires in the Blue Mountains west of Australia's largest city may have been started by children. Others apparently were started by power lines being buffeted by strong winds. One was even started by an army training exercise gone wrong.

But the biggest culprit has been the weather. It's been dry, windy and unseasonably hot — in the upper 80s in Australia’s early spring.

Map showing extent of wildfires near Sydney, as of October 20, 2013. (Source: Reuters)

Taylor Auerbach, a reporter with Newscorp in Australia, says conditions on Wednesday were “a perfect storm” for bushfires.

The fires began last week and have consumed roughly 300,000 acres of land and more than 200 homes. They've closed schools and sent many local residents down the hills into Sydney to wait out the danger.

But even that hasn't been up to the task. At last count 19 fires were still out of control. And Auerbach says new ones can start virtually without warning.

“You can be looking at a rather nondescript patch of bush in the Australian outback,” he says, “and all of a sudden you'll see a little bit of smoke, and then a tiny flame, and literally within seconds you'll have a roaring inferno, and the wind creates a tornado of fire in the treetops.

"And that heat is just so intense your eyes water, and every sense in your body is just overwhelmed by the power of nature at that moment.”

Of course, fire is no stranger to Australia. It's been a big part of life and the landscape in the country for millennia. But New South Wales Rural Fire Service commissioner Shane Fitzsimmon says conditions this year are off the charts.

“Never before have we seen the extent of damage and destruction and wide-scale fire activity at this time of the year.”

Fitzsimmons adds that “it's indicative of the unseasonably hot, dry conditions that have been building now throughout winter and into spring.”

Edward Kerr, who lives in the Blue Mountains town of Black Heath, but who's taking refuge this week in Sydney, says he’s worried this is just the start.

“I'm concerned that this might be the first of four or five trips down to Sydney for me,” Kerr says. “It’s unprecedented to have this sort of hot weather in October. This is the sort of weather that we expect in our hottest month, which is February.”

And even in this land of extremes, "unprecedented" is becoming a regular part of the Australian lexicon, when it comes to weather.

Australia has seen a rash of extreme weather events in recent years, and this year's heat and fires are just stoking the raging debate in Australia over whether or not the effects of climate change are already being felt in the country.

That debate helped bring down the government of former prime minister, Julia Gillard, earlier this year. Her replacement, conservative Tony Abbott, has been an outspoken critic of mainstream climate science and came into office promising to get rid of the carbon tax Gillard had put in place to help address climate change pollution.

Speaking this week on a Melbourne radio station, Abbott blasted talk of climate change being even partly responsible for the fires.

Abbott reserved special scorn for Christina Figueras, head of the United Nations Framework Convention on Climate Change, who said this week that there was "absolutely a connection between wildfires and rising temperatures."

Abbot said Figueras was "talking through her hat."

But climate scientists say it's Abbott who's got the science wrong.

Kevin Trenberth, a distinguished senior scientist at the National Center for Atmospheric Research in Boulder, Colorado, says he’s “on the side of Christina Figueras.”

Trenberth says Australia is one of the countries most vulnerable to the effects of climate change, and that “the Australians ought to be very worried.”

That's over the medium to long-term, of course.

In the meantime, whatever their feelings about climate change, Australians have fires to put out, and possibly a long, hot summer ahead of them.