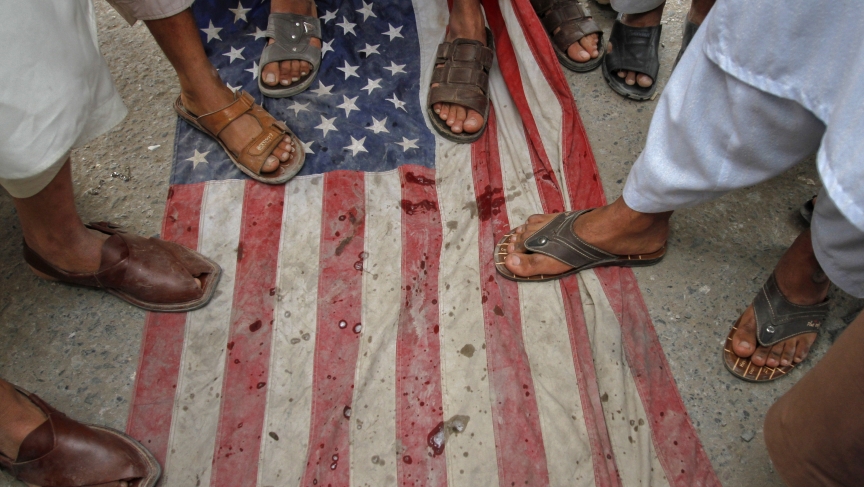 Men step on a U.S flag during an anti-American rally in Peshawar, Pakistan in April of last year.

America's use of drones to kill suspected terrorists has long fueled global suspicion and anger. When US officials discuss these strikes, if they discuss them at all, they emphasize their effectiveness in stopping terrorists in faraway places. But Amnesty International says these drone attacks may amount to US war crimes.

The rights group investigated nine drone attacks in the North Waziristan region of Pakistan that have occurred since January, 2012.

"Pakistan is a place that is full of speculation and a lot of rumors about what is happening in drone strikes," says Naureen Shah, "and this is a heavily politicized issue." Shah is an advocacy advisor with Amnesty International in Washington.

She admits it is hard to get the facts and to determine if the people killed were militants or not. But Shah says several of the strikes killed civilians who were clearly not involved in fighting and posed no threat.

For example, says Shah. "A 68-year-old grandmother was killed while gathering vegetables in a large vacant field. We don't have any indication that she was involved in posing an imminent threat to the United States or was involved in a militant group. That raises questions as to what the US government is doing."

In another strike, she says, 18 laborers were killed, including a a 14-year-old boy.

Of course, "the Pakistani military has committed serious abuses, including indiscriminate killings in these same areas," says Shah. And militant groups pose a threat to the local population, as well, and have committed human rights abuses. But Shah says that doesn't excuse US abuses.

President Barack Obama significantly ramped up drone attacks when he took office in 2009. The frequency has steadily dropped since then, partly because of growing tension between Pakistan and the US. There have been around two dozen strikes so far this year.

But are these really war crimes?

"We documented a disturbing trend of what we call rescuer attacks," Amnesty International's Shah says. After an initial drone strike, people rush in to provide medical assistance to those hurt. "Then 10 minutes after the initial strike, a second strike occurs," she says. "That, in the cases we have documented, resulted in killings of civilians and killing of wounded individuals, which could amount to a war crime, if done intentionally."

"The question is what kind of message is the US government sending about its own use of drones," she asks. "Is it sending the message that this technology should be used to evade accountability, to conduct killings secretly?"

She argues that drones are rapidly proliferating and soon other countries will be using them, so the US needs to realize that it is setting an example others may follow.

On the eve of a visit to Washington, Pakistani Prime Minister Nawaz Sharif repeated his demand for the US to put an end to drone strikes, saying "the issue of drones has become a major irritant in our bilateral relationship."

There are indications that Pakistan's government has given the US military a green light to unleash drone strikes against suspected terrorists in the past.

And not all Pakistanis are against the strikes. Muhammad Zubair was discouraged when he read the Amnesty International report and saw it was fueling the drone controversy.

"As a Waziristani, it is an extremely frustrating and disappointing thing for me,"  Zubair said. "Drones are the only weapons that are being used against these terrorist groups."

Zubair is a doctoral student in law at Indiana University and a native of South Waziristan, a Pakistani tribal area near the border with Afghanistan. He said he has seen the aftermath of bombing attacks by US drones.

Yet, he said, like many people who live under the thumbs of the Taliban and other terrorist leaders, he sees American drone strikes as an important weapon against the people "who've made our lives hell."