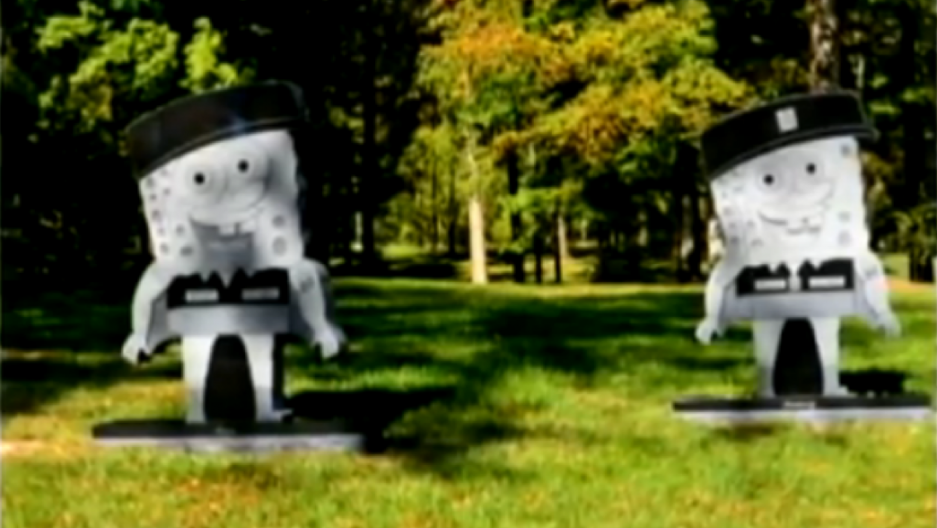 She even took a stuffed version of the character to war with her in Iraq.

Walker served two two-year tours in Iraq in 2006 and 2010 as a petroleum supply specialist, likely with SpongeBob in tow.

Tragically, the 28-year-old Walker was strangled to death by an acquaintance in Colorado on Valentine's Day last February.

In tribute to Walker, her mother had made two six-foot SpongeBob gravestones dressed in an Army uniform, and the other in a Navy uniform for her living sister.

With the consent of Spring Grove Cemetery in Cincinnati, the tombstones were erected on Oct. 10.

A day after they were put up, the cemetery called to say they could not remain as they did not fit the character of the burial space.

"We've decided that they aren't appropriate for our historic cemetery and they can't be displayed here," said cemetery president Gary Freytag.

He added that the employee who approved the headstone made a serious error of judgment.

The cemetery was gracious about it, offering to repay the $26,000 for the headstones and replacing them with others free of charge.

Not good enough, says the family.

"It makes me feel like we're not upholding my daughter's wishes. That's what I want to do. That's the part that hurt,” said her mother.

Freytag says he will meet with the family to work out a compromise.