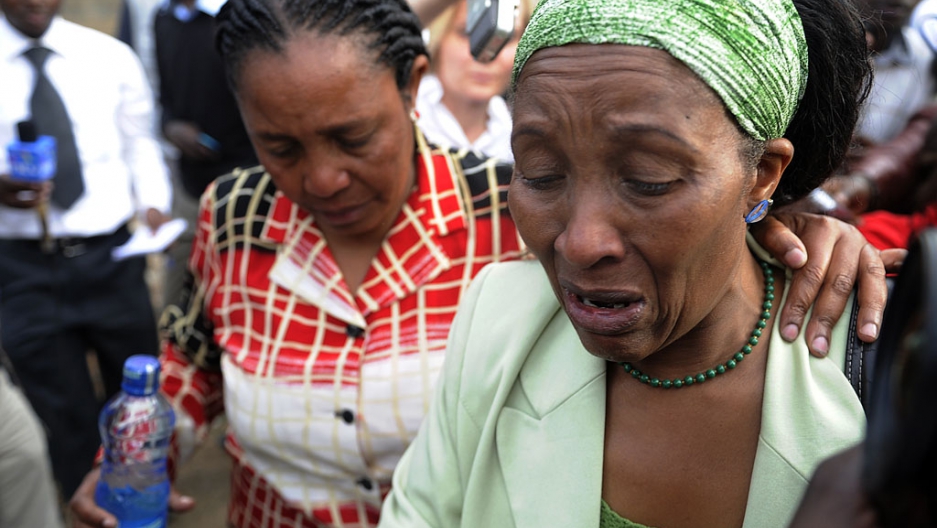 A woman is comforted by a relative on Sept. 25, 2013 after identifying the body of her son at the city mortuary in Nairobi. Kenyan troops and rescue workers scoured the wreckage of a Nairobi shopping mall on September 25 for bodies and booby-trapped explosives after a four-day siege by Islamist gunmen left 67 dead and dozens more missing.
Credit: SIMON MAINA
Share

NAIROBI, Kenya — Grief is giving way to anger in Kenya a month after the country suffered its worst terrorist attack in 15 years when gunmen stormed an upmarket shopping mall in the capital, killing at least 67 people.

As government officials prevaricate and dissemble, the evidence increasingly points to a disastrously bungled operation. According to security sources cited by Kenyan media, “friendly fire” from Kenyan soldiers killed a member of an elite SWAT-style police unit that had pinned the terrorists down, causing the unit to retreat and giving the attackers space to regroup.

Later, there appears to have been widespread looting by Kenyan soldiers even as the public believed the army was fighting hard to save the lives of trapped civilians and hostages during the four-day siege that followed the initial assault.

The attack began during a busy Saturday lunchtime when gunmen armed with AK-47 assault rifles and carrying bags filled with hand grenades and ammunition stopped their car outside the Westgate Mall in Nairobi’s Westlands neighborhood.

Closed-circuit television (CCTV) footage from the mall aired on Kenyan television over the weekend shows two attackers entering through the mall’s main entrance while another two make their way up a ramp to the rooftop car park.

During the siege, Kenyan authorities said there were 10 to 15 attackers. But Western officials who have seen hours of CCTV footage claim there are only four terrorists visible, all men. Nor, GlobalPost was told by one Western diplomat, does the footage contain any indication of hostage taking or torture.

What there is, however, is ample evidence of the attackers' cold-eyed brutality: taking careful aim at civilians as they fled, walking up to hiding places to shoot people at close range, pumping bullets into prone bodies to make sure they were dead.

In one particularly harrowing sequence, a man hides behind a statue of an elephant at the entrance to the mall’s main supermarket, only to be shot once at close range. Still alive, the man writhes in pain, blood spreading around him, before another gunman spots him and returns to finish the job.

Among the shooting and killing there are also jarring moments of humanity. In one sequence, a gunman is seen ushering a woman and four children out of the supermarket. Upstairs his fellow attackers executed others and flung hand grenades at a children’s cookery competition.

But while Kenyans had expected the scenes of terrorist murder, they were less prepared for the footage showing uniformed soldiers pilfering items from the mall, rifling through desks and, in one particularly appalling scene, filing out of the supermarket clutching plastic shopping bags filled with unknown items.

Mobile phone footage posted online shows tables full of empty beer and alcohol bottles. Meanwhile, numerous shopkeepers have spoken of a great loss of merchandise — from watches, cameras and jewelry to the G-strings in an underwear shop.

The revelations are a huge embarrassment to the government and the Kenya Defence Forces (KDF), which took control of the operation to flush out the terrorists, rescue civilians and secure the mall on the evening of Sept. 21.

The footage of soldiers looting was first broadcast on Friday night just hours after a parliamentary committee had exonerated the army of any wrongdoing and announced its findings at a press conference.

“We want to confirm to the media and Kenyans that from what we have seen, no officer from KDF looted as alleged and we want to appeal to Kenyans in the social media to desist from besmirching and maligning the name of KDF,” said National Security Committee chairman Asmam Kamama.

Ndungu Githenji, chairman of the Defence and Foreign Relations Committee, added that storeowners who alleged looting may be trying to cover for their own lack of adequate terrorism insurance by claiming losses were the result of theft instead. “Not all Kenyans are as forthright as you may like to believe,” said Githenji.

But many Kenyans suspect the MPs themselves of not being forthright.

Kenya’s Daily Nation newspaper described the MPs’ findings as “disturbing,” while Kenyans on Twitter have been far less charitable in their choice of language.

“It is doubtful that those parliamentary committees have the capacity to competently investigate the claims of looting,” the newspaper said in an editorial calling for a full public inquiry.

“It is not difficult to understand whose interests the parliamentary committees are serving,” it said.

Meanwhile, the criminal investigation into what happened is moving slowly.

An hour-long documentary aired by the KTN television station on Friday had Kenyans glued to their screens. It asked many of the fundamental, still unanswered questions, including what went wrong in the military operation, how many terrorists there were, how many — if any at all — were killed or escaped, and even how many people died.

Last week Kenyan authorities said it was “highly likely” that some of the body parts removed from the rubble where a section of the mall collapsed belonged to the terrorists, but no further information has been released.

So far, none of the four attackers clearly seen in CCTV footage has been properly identified. Kenyan authorities have issued only their noms de guerre and suspected nationalities. Foreign investigators have resorted to calling the attackers by their dress: Black Shirt, White Shirt, Pink Shirt and Blue Shirt.

During the siege, Kenya’s Foreign Minister Amina Mohamed told PBS NewsHour there were “two or three Americans” and a British woman among the attackers, but there is so far no evidence to back the claims.

A BBC investigation has identified one of the attackers as a 23-year-old Somali man with Norwegian nationality. Hassan Abdi Dhuhulow was born in Somalia and moved to Norway as a refugee in 1999. Dhuhulow returned in Somalia in 2009 and joined the Al Shabaab militant group that is affiliated with Al Qaeda and has claimed responsibility for the Westgate assault.

At least one of the four attackers seen in the CCTV footage is believed to be Kenyan.

Another Kenyan national, Abdulkadir Mohamed Abdulkadir, also known as Ikrima, has been tied by Kenya's National Intelligence Service (NIS) to previous planned terrorist attacks in Nairobi and elsewhere. Believed to be an important figure linking Al Shabaab, Al Qaeda and Kenyan extremists, Ikrima is also thought to have connections to Norway, where he has lived in the past.

Ikrima was the target of a failed snatch raid carried out by US Navy SEALs on the coastal town of Barawe in Somalia earlier this month.