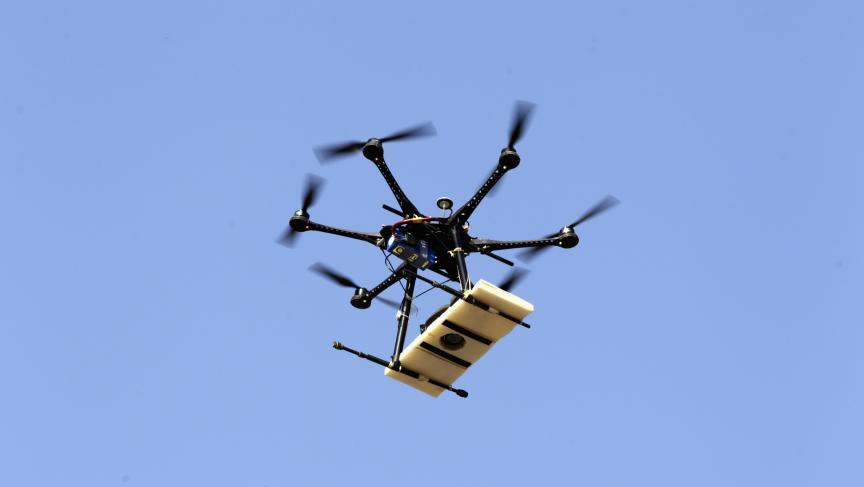 A drone flies over the archaeological site of Cerro Chepen as it takes pictures in Trujillo, Peru in August. Archaeologists are turning to drones to speed up sluggish survey work and protect sites from squatters, builders and miners.

Patrick Egan is a "drone advocate." Yes, there is such a thing. And no, he is not a military type.

Egan sees great benefit in using drones for civilian and commercial projects, and he wants people to recognize that the technology itself doesn't kill people — it is the people who control the technology.

He's worked with drones for a decade, and he helps run a blog and produces a podcast focused solely on news related to unmanned technology.

"There's a lot of good that can be done with this technology," Egan says. "Erosion studies, anti-poaching efforts, anti-deforestation ... and the list goes on and on and on."

Egan says the many good uses of drones get lost in the controversy around their more violent and secretive uses.

Amnesty International released a review Tuesday condemning the CIA for "unlawful killings" through drone strikes in Pakistan. Last week, a UN investigation found that US drone strikes had killed at least 400 civilians in that country.

The military drone programs have overshadowed the rest of the drone industry, Egan says.

"You ask people, 'when I say drone, what do you think?' And what I hear is, 'Oh, it's that gray thing with a bulbous nose that looks like a Beluga Whale with the missiles hanging off of it.' That kind of image, it's hard to combat."

He knows all too well, from the reactions he gets when he tells people he's a "drone advocate."

"I've been called drone-dealer and some other colorful titles," he says. "Unfortunately, there's not a lot of good news in the press about drones" because of Federal Aviation Administration restrictions on commercial use of drones in the US.

Egan insists that he has never been a proponent for weaponized, unmanned technology. Instead, he is an advocate for unmanned, camera-carrying drones — the typed used for work like monitoring natural disasters, scientific research, and conservation.