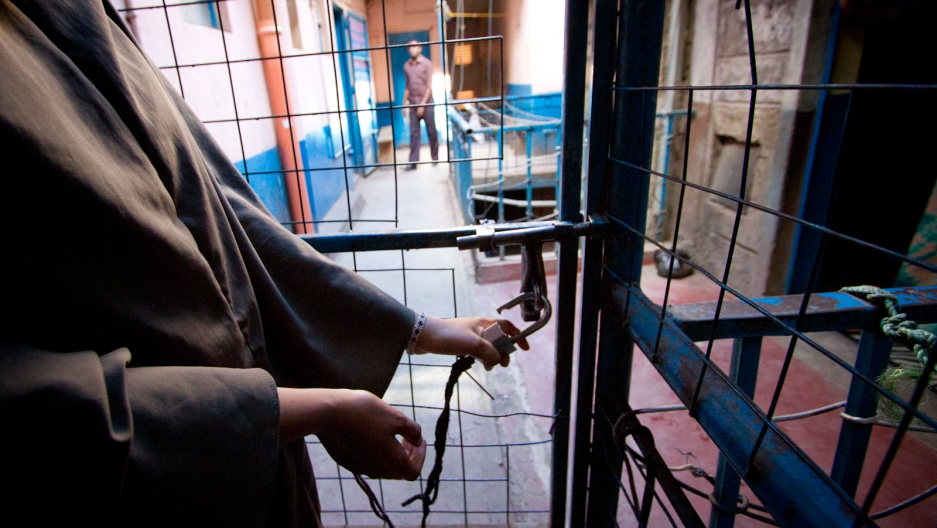 A 20-year-old Somali refugee demonstrates the gate to her family's apartment that a Nairobi police officer threatened to break open before the family paid him a 2,000 Kenyan shilling ($25 US) bribe to leave.
Credit: Jacob Kushner
Share

NAIROBI, Kenya — In the middle of a crowded downtown street stand two hundred men and women, listening to a religious debate between a Muslim cleric and a Christian priest.

The two take turns shouting into a microphone that amplifies their voices to the curious onlookers: ‘The Bible says...’ the priest begins. The cleric responds, “The Koran says…” and so on.

The ritual has become a daily phenomenon as Christians and Muslims come together to discuss their religions here in Eastleigh, the heart of Nairobi’s Somali Muslim community. But this religious debate held a special significance Monday, exactly one month after gunmen including at least one Muslim of Somali heritage began their deadly siege of Nairobi’s Westgate shopping mall.

In the initial hours of that attack, accounts surfaced that attackers asked civilians inside the mall to recite parts of the Koran in an attempt to identify Muslims and spare them.

“We heard they were asking them, if they could read the Koran, and they wouldn’t be killed,” said Roy Sam, whose older brother was killed as he deposited money in a bank at the mall. “I have a friend who was Muslim who was there and managed to read, and he was allowed to go.”

But Sam’s brother, Thomas Ogola, 33, was not Muslim.

“It was a close range shot to his head,” Sam said.
Ogola, 33, left behind a wife and three-year-old son.

“I think it’s revenge,” Sam said of his brother’s death at the hands of Islamic militants. “It’s the normal fight that’s been going on between the Muslims and the Christians.”

Kenya is majority Christian but it is home to a growing population of Muslims, many of whom live in coastal regions, in Somali refugee camps in Northern Kenya or in Somali communities in Nairobi.

Two weeks after the attack, religious violence erupted in Kenya’s port city of Mombasa after a Muslim cleric was assassinated in his car. A group of Muslim youth set fire to a local church in retaliation for what they say was a targeted police killing of a Muslim leader known as a staunch government critic.

Kenyan authorities now believe just four men committed the Westgate attack that left some 67 people dead and more than 200 injured. The assailants, including one identified by the BBC as a Norwegian national of Somali descent, are believed to be affiliated with the Somali Islamic militant group al-Shabaab, which said the attack came in retaliation for Kenya’s military presence in Somalia.

Kenya sent soldiers into Somalia to pursue al-Shabaab fighters in October 2011, and it later aligned some 5,000 troops with the African Union peacekeeping mission to Somalia (AMISOM).

In a recent article Davidson College professor and al-Shabaab expert Ken Menkhaus said the attack was “an act of desperation by a jihadi group beset by internal power struggles and plummeting support. It is intended to provoke a violent backlash against ethnic Somalis by the Kenyan government and Kenyan citizens.”

If the attackers hoped to sway Kenyan opinions against Somali refugees living here, they might have been disappointed. For the most part, the only Kenyans who are calling for action against local Somalis are the politicians who have already been doing so for some time.

Earlier this month Associated Press reported Ndung’u Githinji, chairman of Kenya’s parliament Foreign Relations Committee, as saying officials would “rethink” their support of Somalis in refugee camps here. Dadaab camp near Kenya’s border with Somalia is home to some 425,000 Somalis, many of whom fled Somalia under al-Shabaab’s violent Islamic rule.

Last year, Kenyan authorities attempted to relocate Somalis from cities like Nairobi to refugee camps, and later called for the closure of those camps altogether.

In January, Kenya’s High Court suspended a government directive to relocate some 55,000 refugees living in Kenyan cities until it could decide whether the relocation was lawful, according to Human Rights Watch.

The directive came immediately following a series of attacks in Eastleigh, a Nairobi neighborhood home to hundreds of thousands of Kenyans of Somali origin and Somali refugees. Six attacks involving grenades and other explosives occurred here in November and December 2012, some of which injured and killed civilians. In one case, some residents responded by attacking Somali residents.

In the days that followed, “police in Nairobi tortured, raped, and otherwise abused and arbitrarily detained at least 1,000 refugees,” according to a May report by Human Rights Watch. It found police routinely arrested Somalis and demanded they pay bribes for their own freedom.

One woman told researchers she returned home to find five police officers accosting her daughter before arresting them both. Police demanded the two pay a bribe for their freedom, but even after a husband and wife who were apprehended with them handed over Ksh 15,000 (US $181), they were still held on a truck for six hours before police released them at midnight.

Such tales of police using Somali residents as personal bribe banks are common.

A 20-year-old legal refugee from Somalia who asked that her identity be protected for her safety recounted to GlobalPost her experience one night last November when a policeman threatened to break down the gate of her apartment and arrest her and her sister and mother. He left only after demanding a 2,000 Kenyan shilling ($25 US) bribe, which the family paid.

Just last month, Omar Haji Ali, 26, says he was arrested by police as he ate dinner one evening. Police demanded he pay a 1,000 shilling (US $12.50) bribe after first asking him if he was affiliated with al-Shabaab. This, says Ali is precisely the situation he had hoped to avoid when he fled Mogadishu in March and crossed illegally into Kenya.

Mohamed Olat Ibrahim, 32, says the situation in Eastleigh worsened last year when Kenya’s government announced that Somalis must re-settle to refugee camps from the cities.

Many did flee, and “they left behind their businesses, which collapsed,” said Ibrahim, a Kenyan of Somali heritage who runs an educational center and shelter for Somalis in Eastleigh called the Dallas Educational Center.

Although Ibrahim said there does not seem to be heightened persecution of Somalis here since the Westgate attack, the Washington Post and other media outlets reported that police were arresting Somalis in Nairobi in a desperate attempt to find suspects for the attack.

For the most part, Kenyans don’t seem to be calling for actions against Somalis and Somali Kenyans in retaliation for the attack. Many in Kenya christened one Kenyan of Somali heritage  Abdul Haji, a ‘hero’ for leading an American family trapped inside Westgate Mall to safety, photos of which circulated on the Internet.

A statement issued days after the attack by Kenya Tuna Uwezo, a US-funded group working to reduce political conflict and ethnic violence, urged Kenyans to maintain a sense of national unity.