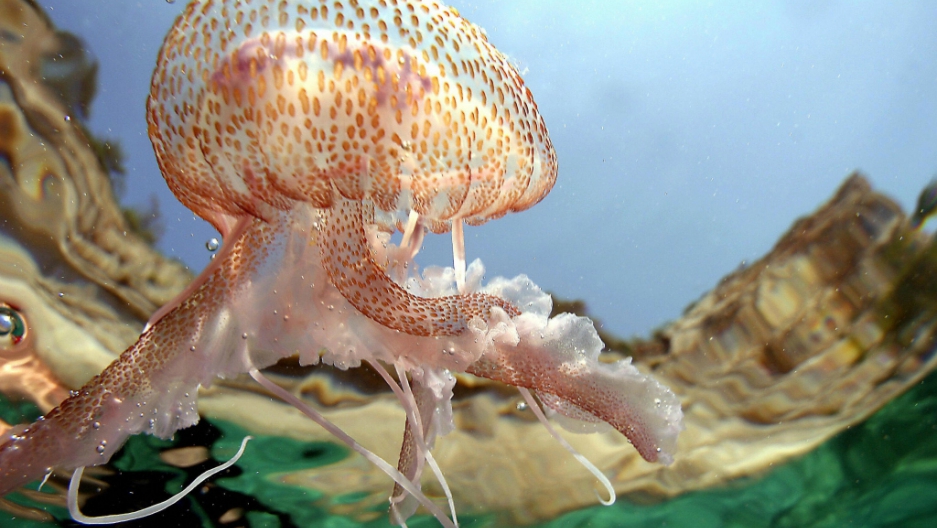 A jellyfish swims in the Mediterranean.
Credit: TARIK TINAZAY
Share

Jellyfish are taking over the world, scientists say. They are reproducing too much and not dying enough. They are clogging up power plants. They are messing with fishing hauls. They are making it unpleasant to swim at beaches. The nature of that unpleasantness ranges from mild discomfort to death.

Here are some of the things worth loving and fearing about jellyfish — the strange, beautiful creatures from the deep that may soon rule us all.

1. They Have Crazy Anatomy

Jellyfish are very cool, biologically. They don't have brains. They don't have hearts. They are mostly water. You're going to want read up on your Jellyfish anatomy, locomotion, and life cycle to prepare for their imminent world domination. Start by consulting this chart so you know what part of the jellyfish is eating you and what part is stinging you.

2. They Do Color Well

Jellyfish look awesome in aquarium tanks that have colorful lights. In these tanks, they entrance us with their beauty and lull us into a false sense that we are their masters. Moon Jellyfish look especially cool.

Like these little guys at the Beijing Aquarium. (Interesting color choice, China. I see what you did there.)

Here's a subtly lit friend at the Stralsund Oceanarium in Germany:

This is the yellow jellyfish, looking ethereal as hell at the Aquarium of the Pacific in Long Beach, California.

This jelly at the Grand Aquarium of Saint-Malo in Western France seems too beautiful to be plotting your destruction. Right? Wrong.

Hopefully the lighting will be nice when jellyfish put us in tanks for their viewing pleasure.

3. There Are So Many Different Kinds!

There are so many different kinds of jellyfish. When their powers combine...

An Echizen jellyfish in Japan. If this jelly had eyes, he'd be staring into our souls through the camera lens: "Soon."

And co-stars at the New England Aquarium in Boston, the Blue Blubber jellyfish...

...and the Egg Yolk jelly, which does, indeed, look like a poorly poached egg.

And finally, the Kingslayer, so named for having killed an American tourist named Robert King, who was swimming off Port Douglas in Queensland, Australia.

4. They Are Awesome for Science

Science and jellyfish were made for each other. Scientists at Harvard and Caltech have built functional jellyfish using living cells from the hearts of rats. NASA scientists have shot jellyfish into space to see how they do in microgravity. And the Office of Naval Research has been working on a 5-foot wide jellyfish robot called Cyro. For spying, obviously.

Here's a nice marriage of science and jellyfish: Festo's Aquajelly, "an artificial autonomous jellyfish in water, a self-controlling system which emulates swarming behaviour." Not clear what it's for, so let's just say spying. Presented at the Hanover Fair in Germany.

5. They Are Great at Parties

Jellyfish are cool, so it makes sense that people would want jellyfish at their parties. We are already worshipping at the altar of our jellyfish gods.

At Glow 2013, "an all-night cultural experience" in Santa Monica, California, a group of artists calling themselves Aphidoidea created this excellent swarm of glowing jellyfish.

When Singapore celebrated the 42nd anniversary of its independence in August 2007, jellyfish balloons floated above Marina Bay.

And these kids in Melbourne, Australia are looking fresh with jellyfish decorations during the city's annual Moomba Parade.

File this one away for Halloween: Umbrella + streamers = easy, cheap DIY jellyfish costume.

6. Unfortunately, They Can Seriously Mess Stuff Up

As cool as jellyfish are, they can do all sorts of damage. A nuclear power plant in Sweden learned this the hard way a couple of weeks ago when jellyfish clogged the pipes that carry cool water to the turbines. This wasn't the first jellyfish assault on a power station, and it won't be the last.

Here are some jellyfish screwing up the Orat-Rabin power plant in Hadera, Israel back in July of 2011.

There were so many jellyfish the authorities needed construction equipment to remove them.

But we're more used to jellyfish messing up our beach trips than our power plants.

Sometimes it's just a little messed up. Like when you're walking down the beach and you don't have your glasses on and you've got a sunburn and you step on one of these guys. Gross. Get off the beach, jellyfish. Seriously.

When too many jellyfish get together things get a bit more messed up, beach-wise. Planning on taking a dip at this watering hole in Sharm el-Sheikh, Egypt? No. No you are not.

Things get seriously messed up though when a Box jellyfish shows up because Box jellyfish can mess you up in the most serious way possible: by killing you. Brush against this guy while swimming in South Africa, and you're in trouble.

If you survive, great. But don't push your luck with this group at Oudekraal Beach in Cape Town.

And if you happen to be a sea turtle, there's one jellyfish you definitely want to avoid: a plastic bag. This one's floating along in the marine harbor of St Michael's Mount in Cornwall, United Kingdom.

Technically, this is an example of humans messing stuff up, not you, jellyfish. You get a pass on this one.

So jellyfish are slated to take over the world. Is there anything we can do about it?

Yes. We can eat them until there are none left, just like we've done to so many other ocean species. Jellyfish overlords? How about jellyfish shashimi.

Which introduces the question: which ocean species will rise up after the decline and fall of the jellyfish?