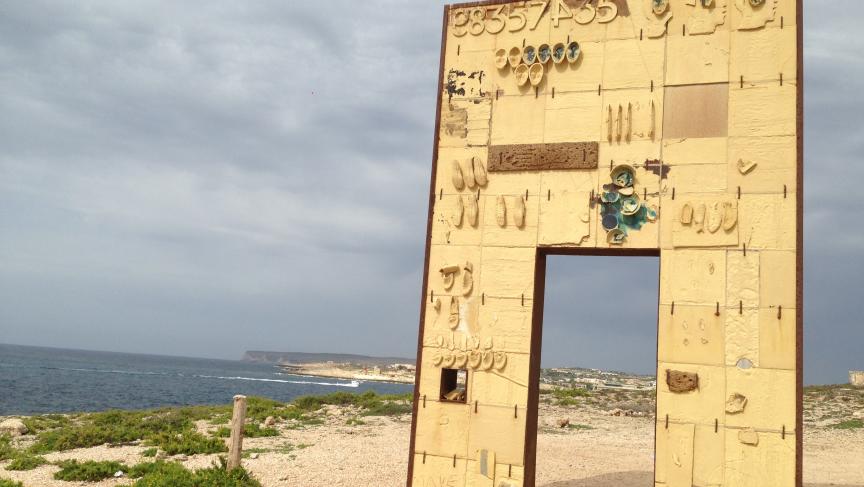 "The Door of Lampedusa, Door of Europe" underscores the situation of refugees who arrive on Lampedusa as the entry point to the rest of Europe.

I was having a cup of coffee in Florence, Italy, when I heard about the shipwreck near the Mediterranean Island of Lampedusa, at the southernmost point of Italy.

More than 350 people drowned in the turquoise waters of the sea, just a mile from a tourist beach. They were African refugees, fleeing Eritrea.

Among the dead were women and small children, trapped in the bottom compartment of a 60-foot boat that had set sail for Sicily, but was stranded near Lampedusa.

The news came at the tail end of a month-long vacation from my journalistic work covering immigration issues in Arizona. Fortunately, I was also learning Italian, which allowed me to understand what was going on.

I understood it in another way, though, too. It rang a familiar bell.

Many in Arizona die from thirst and dehydration; in Lampedusa they drown. In Arizona, close to 200 people are found dead each year, attempting to cross the desert. But there’s no way of knowing how many people have died overall.

The situation is the same in the Mediterranean. We know about this tragedy, but we'll never know how many have lost their lives somewhere along the way.

On Italian TV, the news was everywhere. A news commentator asked: Who's responsible? Everyone. And no one.

Hundreds of thousands of migrants have arrived and someone in government says “there is not enough room for the dead nor the alive” in tiny Lampedusa.

Pope Francis said one word that made headlines for days: “Vergogna.” Shame.

I decided a week later to travel to Lampedusa and learn about the situation there. My reason was simple: The tragedy was much too familiar. I understood it — the players were different but the fundamental issue the same. Migration.

Can a local community on an island of 5,000 people handle it alone? Why are people migrating? What policies does the European Community have in place to deal with thousands of refugees arriving at Lampedusa’s shore each year? How is this debate taking place in Europe? Is it similar to the one we currently have in the US over immigration reform?

On the plane to Lampedusa, I heard about the type of trauma the locals endure as we descended. A passenger said that there weren't lights in the sea, because fishermen were too afraid to recover the bodies of the dead. What seemed to us outsiders to be shocking news had over the past decade become common for people in Lampedusa.

Perhaps for even longer.

Because of its location, Lampedusa has been a gateway to Europe for centuries. And now it's the destination of migrants from sub-Saharan nations, especially Eritrea.

My first night in Lampedusa, the family I was staying with dragged me to the port. I wasn’t sure what I was about to see, but the picture soon became clear.

It was Oct. 13, ten days after the shipwreck.

A crane lifted dozens of coffins, two at a time, to be transported by navy boat to Sicily, where the dead would be buried.

Hundreds of people stood in the dark and in silence. I could tell the survivors because they all received sports uniforms. Most of them lost all their clothes in the wreck.

Locals were watching as well. No one talked about anything else. It was difficult for people not to break into tears.

Rosella, the lady that rented me a room, choked up when she told me they had found a pregnant woman who had given birth in the boat, with her umbilical cord still attached to her baby.

I couldn't — and can't — confirm that story. But it's a portrait of the state of sorrow among residents of Lampedusa.

The following morning, I went for a walk and saw my colleagues roaming around the town. It was an interesting procession of cameras, tourists and refugees.

Most of the refugees stay at a reception center, but it can only hold 250 people. And the flow of arrivals continues.

I saw local restaurant owners offering food to the refugees, and others offering them shoes and clothing. I was told Lampedusa is known for its hospitality.

But there was a sense of indignation among residents who felt the Italian government was absent. They complained it wasn't dealing with the aftermath of the tragedy in a humane way and hadn't called on the rest of Europe to help address the global problem.

They were also concerned the livelihood of the island, tourism, was being destroyed; some people call Lampedusa “the island of death.”

Journalists and politicians come with each tragedy. Then they leave. But the problem remains, said Nino Taranto, a local historian who has lived all his life on the island.

Mebrahtu Ghide, 26, worked as a teacher in Eritrea. His English was a bit broken but his ideas were crystal clear. He's a survivor of the journey.

Ghide said his journey to Italy started at the end of March. A sophisticated smuggling ring transported them — much as it works in Arizona. People spend years paying their smugglers.

Ghide went through Ethiopia, was incarcerated in Libya and had to pay his way out. By the time tragedy struck in Lampedusa, he'd already experienced violence and inhumane conditions.

Another survivor, in a boat returning to Palermo, lost his 29-year-old brother. He pointed at a wound on the side of his ribs and touched his head saying: “My head is not right.” I understood.

“My journey is not over, it continues from Lampedusa,” he said.

I walked down to Isola Conigli, Rabbit Beach, Lampedusa’s most beautiful beach and claim to fame. It was also the site of the tragedy.

I couldn’t help but think on the lingering questions from the locals. How come nobody saw a boat that was a mile from the beach? Italian law bans providing aid to foreigners that are arriving illegally.

The beach had to be shut down after the tragedy because there was a concern the remains of the dead could roll onto shore.