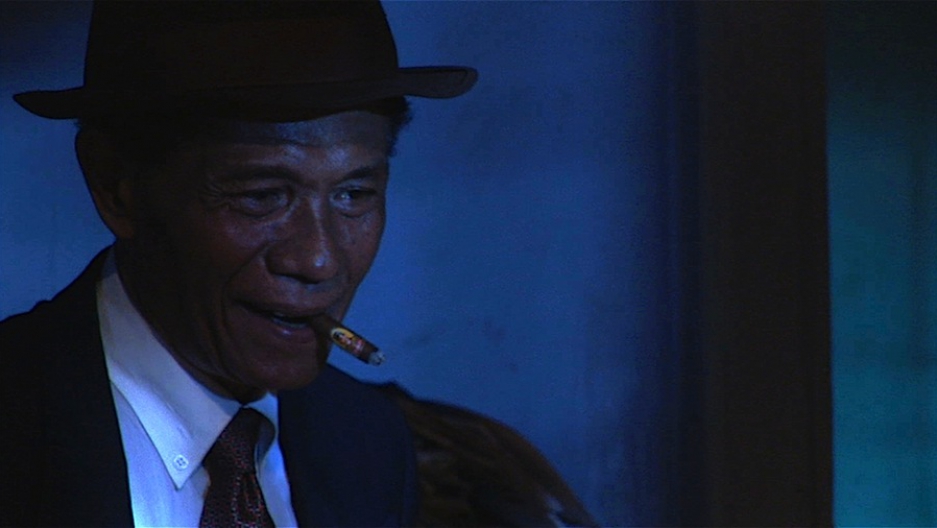 BANGKOK — As retired death squad captains go, Anwar Congo is surprisingly brash and suave. He struts the side alleys of Medan, a grubby second-tier Indonesian city, in mustard-colored suits and gold watches. He has Shaft’s fashion sense and — in his mind, it seems — Sidney Poitier’s fetching looks.

For decades, Anwar’s movie-gangster panache has helped divert attention from an ugly truth: He’s a mass murderer. By his own boastful admissions, Anwar was a mid-level player in a 1960s anti-communist killing spree that racked up at least half a million deaths, quite likely more. Estimates run as high as 3 million.

Anwar, now 72, is the unlikely leading man in The Act of Killing, a highly acclaimed documentary executive produced by Errol Morris and Werner Herzog. Recorded over eight years by Texas-born director Joshua Oppenheimer, the film challenges Anwar and his silver-haired cohorts to re-enact the bloody scenes from their youth, when they pursued and slaughtered their countrymen en masse. Anyone suspected of communist activity or sympathy was targeted; simply looking Chinese sufficed.

That these men so gleefully act out the horrors stored in their memory banks is jarring. Their swagger is owed to the fact that their murders were led and sanctioned by the government, which feared the communist wave rocking every Southeast Asian nation from Vietnam to Burma.

The men are doubly fearless now that their deeds are enshrined in Indonesian history as heroic.

“I felt as though I’d wandered into Germany 40 years after the Holocaust,” Oppenheimer said, “only to find the Nazis still in power.”

The film is filled with 1960s and ‘70s Americana: Aging killers drunkenly jamming to Creedence Clearwater Revival, Anwar dancing the cha cha cha on a rooftop where he’d strangled men with wire, withered gangsters’ fetish for cowboy hats and tangerine turtlenecks. “Al Pacino,” Anwar says in the film, “he’s one of my favorites.”

Their Western pop culture fetish recalls an uncomfortable truth: The US government, busy exterminating communists in Vietnam, once cheered on and supplied Indonesian paramilitaries willing to wipe out their own homegrown insurgents.

The film also showcases the ugly cost of impunity. Though Anwar’s clique is no longer free to slay suspected communists, the men roam markets extorting Chinese shopkeepers with violent threats — all while being filmed by Oppenheimer. His exposé into contemporary crime — and his unflattering portrayal of powerful men — factored into his Indonesian crew’s decision to remain anonymous.

Oppenheimer spoke to journalists in Bangkok via Skype earlier this month. Here are his thoughts — edited for length — on angry reactions from former death squad members, America’s influence on Indonesia and the murky ethics of filming real-life shakedowns.

On feeling “love” for a mass murderer: Anwar and I are in touch every three or four weeks. We’ve been through an intense, personal and intimate journey together that has transformed us in different ways. I don’t know if it’s friendship ... It’s him running away from his pain and trying to deal with it at the same time. Me trying to expose a moral vacuum borne of impunity for genocide. But I think there is love between us.

On filming shakedowns against Chinese merchants: I raised the question with my crew: Maybe we shouldn’t shoot this. I don’t want to be an accessory to their crime. My crew said this happens in every market in Indonesia. Every day. Nobody ever films it. You have a responsibility to document it.

What I did is asked (the extortionists) ... to move along 50 yards and wait for me. I told them I was getting a release form signed. What I was really doing was explaining why we were there and paying everybody back. That transformed what would have been inexpensive into one of our most expensive days of shooting because we filmed 30 such encounters.

On potential threats to the Indonesian crew: The anonymous Indonesian crew, these are people who gave up eight years of their lives to work on this film. Risking their safety. Knowing they may never be able to put their names on this work.

Many Indonesians, helpfully, have only one name. It’s hard to find a member of this crew even if they know their names. There have been no safety repercussions since the film has been released though we remain vigilant. I have been threatened repeatedly. I could probably go to Indonesia now but I don’t think I’d get out again.

On the killers’ reaction to the film: When (Anwar) saw the finished film, he was very moved. Very quiet, tearful ... and then he pulled himself together and said, "Josh, this film shows what it’s like to be me. I’m grateful to have finally had the chance to express these feelings."

The high-ranking politicians who joined the film for their own personal reasons certainly don’t like the film and must feel betrayed a little bit. And I think they should be ... if they like the film, that would mean I’ve failed in my work.

[Editor’s note: in an interview with The Jakarta Post, Anwar called the film a “headache” and described himself as a “victim of the director’s deception.”]

On Indonesia’s ties to the West: So long as [Indonesia] has been a convenient client for US corporations, the narrative has always been positive ... This film is a corrective. It’s a mirror held up to society ... but also to all of us. Everything we buy, everything touching your bodies right now and my body, every article of clothing, is haunted by the suffering of the people who make it.

It’s the underbelly of our reality. I said when I started premiering this film that, in a way, we’re guests of Anwar and his friends’ cannibalistic feast. But, in fact, we’re hosts of that feast.

On the Indonesian public’s response: It’s come to Indonesia like the child in "The Emperor’s New Clothes" pointing at the king and saying, “Look, the king is naked.” Everybody knew it but they were too afraid to say it.

This film has opened the space for the fearless sharing of stories ... people who no one ever knew had family killed or imprisoned are coming forth and saying, "This happened to us."

The head of Indonesia’s leading newsmagazine, Tempo, called me after a screening and said, ‘"Josh, there was a time before 'The Act of Killing' and a time after 'The Act of Killing.' Our magazine has censored stories about this period for decades. I don’t want to do that anymore. I don’t want to grow old as a perpetrator like the men in this film ... we’re going to break our silence on this genocide and, in doing so, break the media’s 47-year silence."

In one fell swoop, it told Indonesians, "Look, you can talk about this." You can be open about this. And perpetrators no longer boast about what they’ve done.