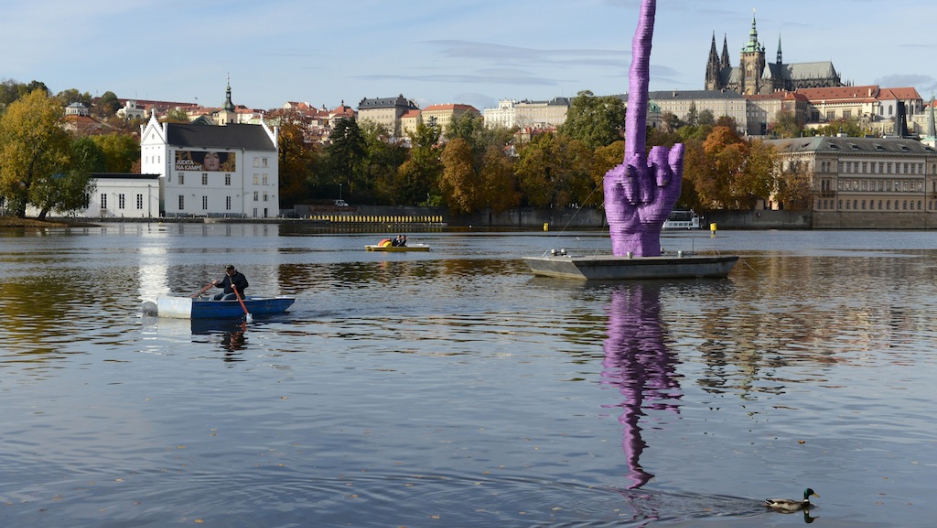 People sailing on Vltava River by the giant purple middle finger sculpture by Czech artist David Cerny on October 21, 2013 in Prague. This artwork installed today, four days before the Czech early general election, on the Vltava River is addressed to Czech president Milos Zeman who's residency is at Prague Castle (in background).
Credit: MICHAL CIZEK
Share

Cerny, known for his anti-communist stance, timed his latest controversial piece of art to make its appearance just days before the upcoming parliamentary elections.

More from GlobalPost: Double-decker bus does pushups for Olympics (VIDEO)

Communists have not held power in the Czech Republic since 1989, but the next elections could see them get it indirectly.

President Milos Zeman, who won the Czech Republic's first presidential elections decided by a direct vote, backs a plan for the center-left Social Democrats to form a minority government with the support of the Communist Party.

Zeman, when asked about the artwork, said he could not comment on it, since he was on an official visit to Ukraine and hadn't seen it yet. It's unclear if the flipped finger will stick around long enough to elicit a response from him.

Cerny, meanwhile, was reticent about the piece, saying that what mattered was which way it was pointing.

The artist previously gained international attention with his giant art installations, including the famous "London Booster," a full-size, red, double-decker bus with giant arms that allowed it to do pushups at the 2012 Olympics in London.