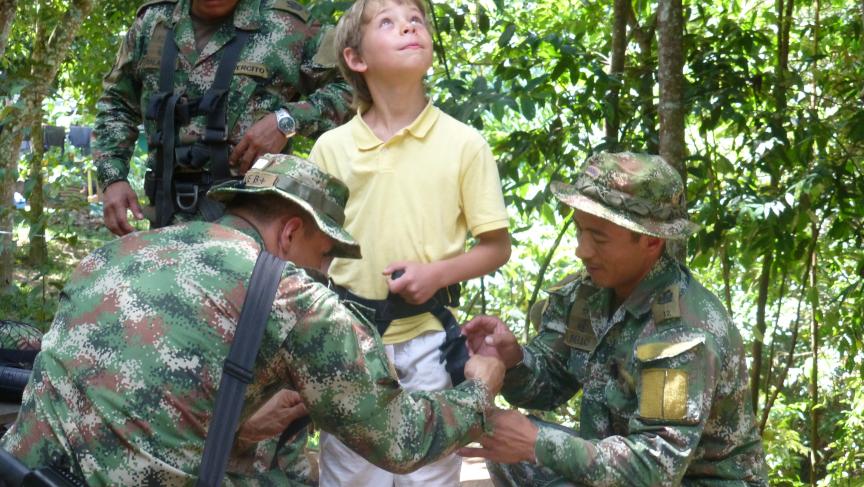 We've just arrived in La Macarena, a hundred miles south of Bogota, and it looks very different from what I remember.

As a reporter, I had visited the park when FARC guerrillas were in charge of everything, from building the town church to collecting taxes to imposing rough justice. During one of my reporting trips here in 2002, the FARC executed six town residents.

For the past 50 years, a guerrilla war has put huge chunks of Colombia off limits to tourists. But now FARC rebels are negotiating a peace treaty with the government. Security has improved, and Colombians are starting to explore mountains and jungles that used to be war zones. I had covered the conflict since 1997. And I decided with my wife to bring our two children to a national park located in what was once FARC territory. I was a little nervous about the trip.

My wife, Alejandra, who is a Colombian journalist, has her own harrowing memories of this place. Her father was once held hostage by the FARC until her family cobbled together a ransom payment. Years later, in La Macarena, Alejandra met a FARC commander who seemed strangely familiar with the whole story.

"Suddenly, we start to talk,” Alejandra says, “and he asked me: 'What's your name?' When I said my name, he opened his eyes, and I realize at this moment that he was the guy who kidnapped my father."

So why would we come back here once again, this time with our five- and eight-year-old sons? For one thing, the guerrillas have been driven out by the Colombian army. The town also sits next to La Macarena National Park, which has spectacular canyons, crystalline rivers, and world-class swimming holes.

For years, fearful tourists stayed away from the park, but now they're flocking here. One of them is Bogota business consultant Juan Gonzalo Vallejo.

"It's like a family jewel that has been lost for decades,” he says, “and finally, one day, you find it and it's open for everyone and it's time to enjoy that jewel."

About 10 percent of the townsfolk now work in restaurants and hotels or as tour guides. Edwin Lopez drives tourists around La Macarena on his motorcycle taxi.

"People used to say that residents of La Macarena were guerrillas and terrorists," Lopez says. "But now, thanks to tourism, the image of the town has changed."

Improved security is largely due to the 8,000 soldiers housed at an army base on the edge of town, which is home to helicopters and a firing range. But what makes the biggest impression on my 5-year-old son Lorenzo is a photo display of FARC fighters as young as 13. He points to a picture of a gun-toting teenager and says, "She shouldn't be in the war."

The base commander here, General Carlos Rojas, tells me that La Macarena is “a land of opportunity. If the guerrillas sign a peace accord, many more areas of Colombia will open up for tourism.”

Still, the country's been at war since the 1960s, so it's sometimes hard to imagine a peaceful Colombia. Reminders of the conflict are everywhere.

While out hiking, we stumble upon a rusty antenna from a now-defunct guerrilla radio station. When we try to tour the Guayabero River, boat drivers tell us rebels are upstream and that it's not safe. So, we retire to the hotel swimming pool, but even there, an army chopper hovers overhead.

That's why La Macarena's makeover feels fragile. All it would take is a single kidnapping or rebel bombing to bring the tourism bonanza to a halt. But at least for the moment, thousands of Colombians, including my wife and children, are finally getting to know their country a little better.

"To show our kids those beautiful places, for me it is unforgettable,” my wife, Alejandra, says. “I'm Colombian and I’ve lived here all my life, 44 years, and it's the first time I can show them this freedom."

As for me, I used to breathe a sigh of relief when departing rebel-held towns like La Macarena. Now, as we check our bags for the flight home, I wish we could stay a little longer.