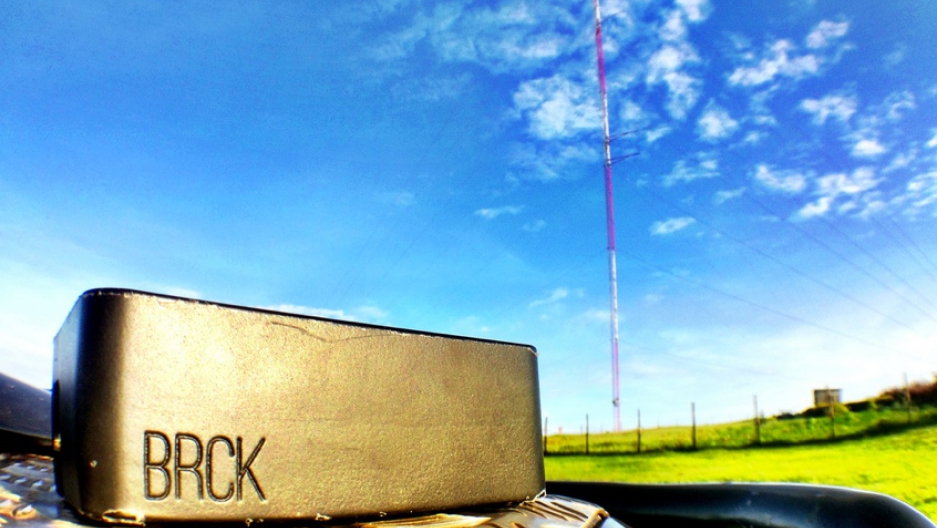 Is this device an African solution to a global problem?
Credit: Ushahidi/BRCK
Share

NAIROBI, Kenya — When the lights go out, how do you stay connected and keep working?

This may not be a daily American problem but in huge parts of the world — whether it's overloaded megacities or isolated rural areas — electricity is erratic, if it's there at all.

Access to internet-enabled phones and computers is there, commercial 3G networks are there but, with depressing frequency, state-run power is not.

The solution, according to Kenyan company Ushahidi, is a little plastic box containing circuit boards, SIM cards, ports, an antenna and a big battery.

It looks like a brick, so that’s what they called it, but this being techland it’s written BRCK.

The device is now being marketed as the “back up generator for the Internet."

When a power-cut interrupts an interview at a coffee shop in Nairobi,  Juliana Rotich, a founder of Ushahidi and one of the brains behind the BRCK doesn't miss a beat.

"You see how that generator’s kicked-in because the powers gone out?" Rotich said. “We wanted to create a way for people to continue being productive and being online despite the power going out. It was a response to our reality.”

The BRCK is about the size of four iPhones stacked on top of each other. It has a minimum eight-hour battery life charged from a car battery, mains or solar, and is rugged, dust-proof and water-resistant.

“It’s the Land Rover of modems,” said Rotich, referring to the British-made 4x4 that is a byword for hardcore, off-road endurance.

The BRCK’s processor allows it to automatically switch between multiple SIM cards stored inside, depending on which 3G network is the fastest at any given moment.

“The BRCK is smart enough to know which is faster and how to find it,” said Reg Orton, the mechanical engineer who built the device.

The BRCK marks Ushahidi’s first step into production of hardware and is, Rotich hopes, an African solution to a global problem. “The modems we use here are designed for London, New York, San Francisco, we did not come across modems designed for our context, our reality, our problems,” said Rotich.

“We have ubiquitous 3G connectivity so we said why don’t we redesign the modem to leverage what is ubiquitous and doesn’t go down when the power goes out, add battery life and automatic switching to 3G when your ethernet goes down.”

BRCK’s research and development was funded by a Kickstarter campaign which exceeded its $125,000 target in just a few weeks. The first 700 pre-orders are due off the production line in late November, after which the BRCK will retail at $249.

Like the BRCK, Ushahidi was also a response to another one of Kenya’s reality: The politically motivated tribal violence that ripped through the country in the wake of the 2007 election.

During that violent crisis, five bloggers and computer programmers overlaid crowd-sourced incident reports of trouble onto a Google Map creating — within days — the first version of Ushahidi, meaning “witness” in the Swahili language. The move kick-started the “crisis mapping” industry in Kenya.

In the years since, Ushahidi technology has been used in places and situations as diverse as the natural catastrophe of the Haiti earthquake and the man-made disaster of the Syrian war. It has also been employed to track attacks on civilians by the Lord’s Resistance Army in the Democratic Republic of Congo, as well as to find the best burgers in the US.

Ushahidi captured and then defined an ongoing moment in Kenya’s history when it began to attract the angel investors and software entrepreneurs who helped earn Nairobi the nickname "Silicon Savannah." Google, Intel and Microsoft have all opened regional headquarters in the city.

“Ushahidi’s mission is about changing how information flows, gathering information from the bottom-up, contextualizing it and bringing it online so it’s archivable and searchable," Rotich said. "That’s the world we live in now. And you can’t have information flow if you have connectivity blockages.”

Connectivity isn’t the only blockage out there. Although BRCK is being designed and tested and its prototypes built in Kenya it will be manufactured in the US because Kenya lacks the capacity for mass production.

It has also made it a more costly enterprise. “If we were in the US I can get next day delivery of parts and circuit boards for $10 shipping, here it’s $150 shipping and it takes a week,” said Orton.

“But if I’m sitting in America I don’t have any context for what I’m doing. People design in a vacuum and think it’s going to work in Africa but the reality is it won’t,” he said. “But if you design it in Africa it’ll work in America,” added Rotich.