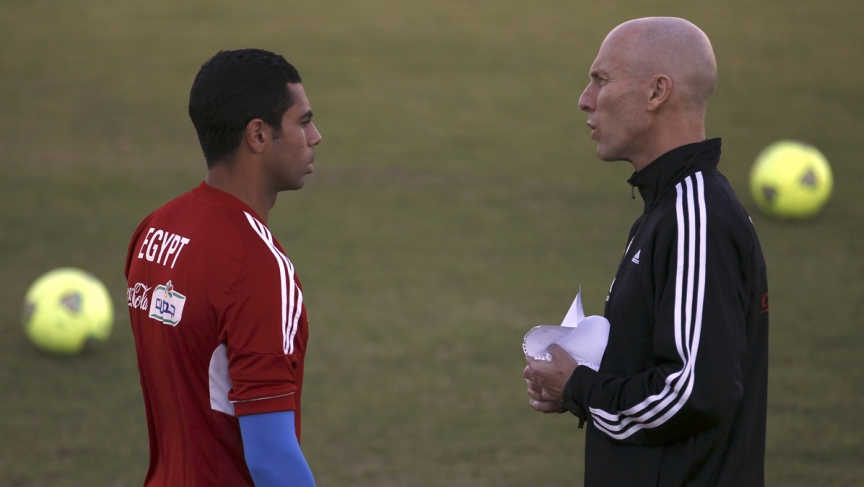 Egypt's head coach Bob Bradley, right, of the US speaks with Ahmed Fathi before a training session during their final training camp.

Egypt's national soccer team, the Pharoahs, got clobbered this week by Ghana, 6-1, in a  World Cup qualifier.

There were high hopes for the Pharaohs, but the Wall Street Journal's Cairo-based reporter Matt Bradley says the lopsided defeat was a shocker.

"What we saw in the game was really a humiliating rout, a 6-1 defeat for Egypt," he said. "We heard fans say things like it looked like they never played soccer in their lives, and that only Mohamed Abou-Treika (a midfielder), who is the hero of the Egyptian team, showed any wherewithal playing a world-class team like Ghana."

Fans who had hoped Egypt would qualify for the World Cup for the first time since 1990 were disappointed, even angry, and sharp reactions reverberated across the politically divided country. Supporters of ousted Egyptian president Mohammed Morsi as well as supporters of his opponents accused each other of bringing the team down. Many loyal fans pointed the finger of blame at Egypt's American coach Bob Bradley for the porous defense. Indeed his coaching job may be on the line. Next week, Egypt's Football Association is expected to weigh in on coach Bob Bradley's fate.

There's speculation he might be benched, or even fired.

Matt Bradley (no relation to the coach) says Bradley, once considered something of a hero, has fallen from grace.

"He was sort of the lost saviour. Egyptians were really very grateful to Bob Bradley for leading the team, improving the team despite political problems, delays and street violence throughout Cairo that really just dragged on the team," Matt Bradley said. "When the game started, Egypt was in a good standing. It went into the match with an undefeated record. So really, the whole country came to a standstill just to see this moment that was thought to be the moment of glory for Egypt after 25 years of sporting failure. And it was very surprising to have Ghana winning 6-1."

Ghana's Black Stars and Egypt's Pharaohs next meet on Nov. 19 in Cairo. But it's unlikely the Egyptian squad will be heading to Brazil. To still qualify for the World Cup, Egypt would have to beat Ghana by at least 5 or 6 goals, a near impossible task.

Ghana recently asked soccer's world governing body, FIFA, to move the Nov. 19 second-round game to another venue in the wake of recent violence in Cairo. FIFA said Egypt has until Oct. 28 to guarantee security for the game. The Egyptian Football Association says Egypt is a safe and the game can go on in safety.

"Egypt does need some luck right now. That's what this country is yearning for. They would really like some good news after nearly 3 years of difficulty, economic collapse, and political infighting," Matt Bradley said.