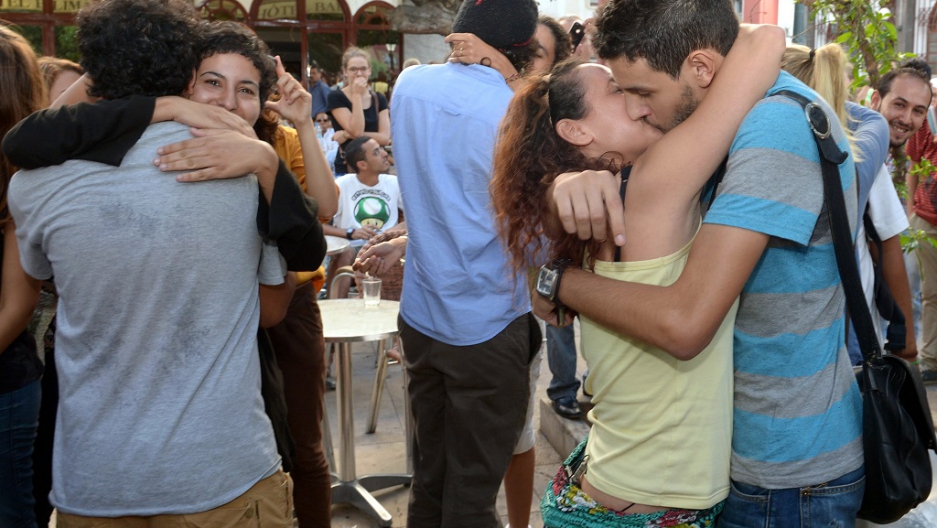 Participants take part in a 'kiss-in' outside the parliament in the Moroccan capital Rabat on October 12, 2013. The event was organised by Moroccan activists in protest at the arrest and trial of three teenagers for 'violating public decency' after posting photos of two of them kissing on Facebook. The offending couple, a boy and a girl aged 15 and 14, and their 15-year-old male friend who took the photos outside their school in the northern town of Nador, were arrested last week
Credit: Fadel Senna
Share

Individuals within the Anonymous hacker collective have targeted the Moroccan government after the arrest of two teenagers in the northeastern town of Nador earlier this month.

The two teens were arrested after the couple posted a photo of themselves kissing outside of their school on Facebook.

"It involves a teenage boy and his girlfriend. They were arrested on Thursday for violating public decency by posting a photo of them kissing," Chakib al-Khayari, president of the Rif Association of Human Rights,  told al-Jazeera.

The Anons also allege that a third teenager was arrested for taking the photo.

"They bring politics to the net, we [Anonymous] ARE politics on the net, we may have to see how hard we can push back,” said one of the Anons involved in the operation.

“This senseless attack on an innocent expression of young love in a country notorious for the domestic abuse of women is a sick and twisted mirror image of what the Moroccan government should be focusing on instead,” read a press release issued by the Anons involved.

In retaliation, the Anons claim to have stolen a “niagarous flood” of data from servers used by the Moroccan Ministry of Energy, Mines, Water and the Environment. In their online release, the hackers dumped information taken from servers used by water.gov.ma, including username and password databases.

Several Moroccans staged a “kiss-in” in Rabat last Saturday in support of the three teenagers arrested. About a dozen couples puckered up outside Morocco’s parliament in defense of what they called a right to display affection publically.

The teens are set to stand trial on Nov. 22, and Anon has stated that they will be watching and “ready to respond” during the time leading up to the trial.

“Censorship, invasions of privacy, and bullying of citizens by their own governments will not be tolerated and will always be met with resistance. Drop the charges against these teenagers. Pull back from the brink of the unbelievable two year sentence they could be facing for simply expressing affection for each other and we will also back down,” the group said in their release.

“There are no conciliatory words here, merely the focus of the true internet hate machine that you are only ever a series of keystrokes away from. For using teenagers as pawns in a war on freedom of expression online, for risking the permanent damage of their young lives, you should have expected us.”