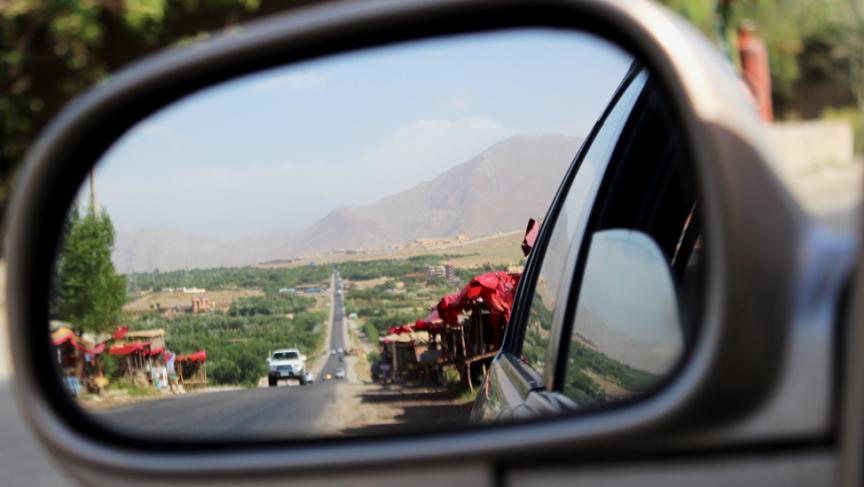 One road connects 16 of Afghanistan's 34 provinces and links most of its major cities from Kabul, Ghazni and Kandahar to Farah, Herat and Balkh. And its state of disrepair and disconnection - is a mirror of the promise and the problems of Afghanistan.

Builders started on what's known as the "Ring Road" in 1961, but years of war and political upheaval left it incomplete. The hope was that it would link all of Afghanistan and spur development, says BBC's Kabul bureau editor Meena Baktash.

Rebuilding the road was a major priority for the international community when it took charge of reconstructing Afghanistan soon after the fall of the Taliban in 2001. "If it would have been peaceful and [the road] properly rebuilt," says Baktash, "it would have had an immense impact on the livelihood of Afghan people and also for unleashing economic growth in this country."

In 2003, Baktash says, the US promised President Karzai that it would rebuild the part of the road connecting Kabul to Kandahar within a year. And that happened. But the country's civil strife has left it unsafe for many. Foreign journalists know that section as "the death road" and don't travel it.

Reporters from the BBC's Afghan service decided to create a series of stories, "Life Along Highway One," covering the length of Highway 1. Baktash says the reason is that "telling the story of the Ring Road will be telling the story of Afghanistan."

"First of all, we learned how difficult it is to travel around Afghanistan," she says. "But actually, traveling on this road, we went deeper into the life of the people... We heard about the past, about the present and about the hopes for the future.

BBC reporters were only able to travel certain sections, Baktash says, but it took them through Afghanistan's different cultures, different languages, and different communities. About two-thirds of all Afghans live within 50 kilometers of the road.

We have photos from Highway 1, below.