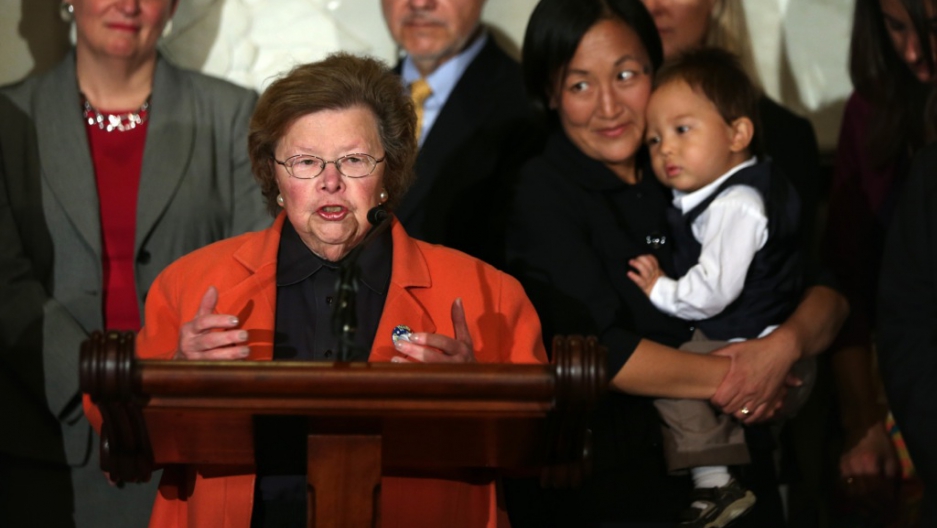 Senator Barbara Mikulski, a Maryland Democrat affectionately known by other female representatives as "Coach Barb," was one of the leading senators who helped strike a deal to end the government shutdown.
Credit: Alex Wong
Share

Senator Patty Murray, D-Wash., once said her experience as a preschool teacher was excellent training for Congress.

As many on Capitol Hill are mugging for the press pool, proud of their political brinkmanship, a small group of female senators (Republicans Susan Collins, Kelly Ayotte and Lisa Murkowski, and Democrats Amy Klobuchar, Heidi Heitkamp, and Jeanne Shaheen) stands to the side, immune to the "me, me, me" fest. Led by Sen. Collins, R-Maine, their strategic collaboration with a handful of male senators led to a deal to reopen the federal government and save the US from a first-ever default.

Even though women make up only 20 percent of the Senate, Collins’ collaborators were 66 percent female. On the bipartisan committee that worked on the deal, nearly half were women. What are the odds that in a Congress 80 percent male, women would lead the way?

Rather than commendation, these women sought resolution. Rather than settle scores, they sat down together. Rather than stick with their teams, they found common ground for common good. Fittingly, Senator Murkowski declared, “Politics be damned.” If we had more women in power, the senators have said, we would have avoided this multi-billion dollar shutdown and globally destabilizing game of chicken over the debt ceiling.

Without talking about one particular woman or man, social science research supports what we know intuitively: Women in leadership care more about the public good and are more inclusive and socially compassionate than men. In Congress, they move forward more legislation, co-sponsor more bills, and are more in touch with their local communities. But perhaps most importantly in this time of disastrous gridlock, women bring to political debate a different set of life experiences, a broader perspective, and a modulated voice.

For 20 years, Senate women have gathered for monthly dinners, where they discuss everything from Guantanamo to grandchildren. Senator Barbara Mikulski, D-Md., started the gatherings. “Coach Barb” also runs the Senate Power Workshop to guide newly-elected women — Republicans and Democrats — on committee selection and teach them the ropes. Beyond their policy work, the “Senate sisterhood” extends to home life, with shared baby showers and summer vacations. As men on the golf course know, those matter.

Despite the obvious advantages to our political system their membership provides, at the current rate, it will take literally two centuries for women to reach 51 percent of Congress, mirroring society. So how do we get to parity sooner?

The new Twin States study by Political Parity, the program I chair, says US women are significantly more likely to be elected senator or governor in states where a female has already won one of those seats. In New Hampshire, North Carolina and Washington, all three top statewide positions have been filled recently by women. In addition, women are more likely to be elected in states with greater racial diversity. These studies provide a path to dramatically increase the number of women political leaders by revealing such trends.

Beyond this analysis, we’ve listened to the women themselves. They’re asking for tutoring for advanced campaigns, plus mentorship — not from their peers, but from those who have made it to higher levels.

Personally, I’m an ardent Democrat. I’m also a realist, and in that I’m not alone. According to our polling, nationwide a whopping 71 percent of female Republicans insist that Congress would function better with more women. Senator Collins says, “Although we span the ideological spectrum, we’re used to working in a collaborative way.” And Representative Debbie Wasserman Shultz, D-Fla., says women get to "yes" “without really clobbering the other side.”

Will our shutdown be more than a wrongful time-out for others’ misbehavior? We can stop the cross-aisle squabbling. Elect more women. We know how to do it.

Swanee Hunt is Chair of Political Parity, a program of Hunt Alternatives Fund, and the Eleanor Roosevelt Lecturer in Public Policy at Harvard’s Kennedy School of Government. Editor's note: Ms. Hunt is an investor in GlobalPost.